Paint by numbers on a Glowforge

I wanted to make a countertop display sign for my friend’s veterinary practice, using her existing vector artwork. The Glowforge made this project possible for me by using it to score the masking on a piece of Proofgrade acrylic, since I’m not particularly good at free-hand painting.

This is the first full-size run of this project, after using some scrap to figure out the burn order and to tweak power settings: 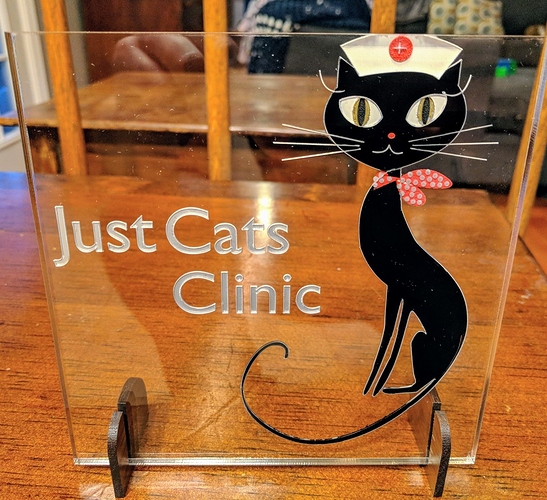 The masking material on Proofgrade acrylic works exactly as desired for masking off areas to paint. By reversing the image and working on the back side of the acrylic, I could layer the paint without damaging the final image.

I used an engrave pass to make certain sections, the badge, pupils, nose, and scarf, stand out more in the finished work. I slightly reduced the score power for cutting the masking and slightly increased it to make the finishing details pop. The surface tension of the oil paint prevented it from running into the score lines, giving a nice highlight effect between areas of paint.

Since this piece was coming in and out of the Glowforge for each paint pass, I used a three-point magnet jig for consistent registration. Hooray for the ferrous crumb tray.

I did wind up needing to edit the original artwork to remove any overlapping paths, e.g. where the hat meets the top arc of the head to prevent unwanted score lines through already-painted areas.

If I do another sign like this, I’ll add some notches to the base of the plastic so the feet can be exactly positioned and try using acrylic model paints to get more even paint coverage. The paint markers are easy to use, but I had to keep going over the body to get consistent coverage. I’d probably also use a series of three engraves to make the eyes, working from the outside in, to remove paint and add additional surface texture.

I have scaled this up to a full 12x18 panel of Proofgrade Medium Acrylic and have refined my approach along the way. 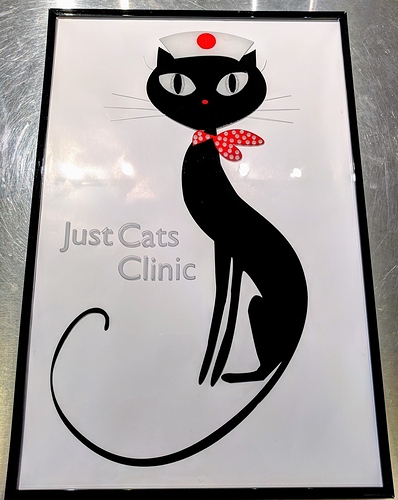 I switched from Sharpie oil-based pens to using acrylic paint mixed 50-50 with a pourable acrylic medium that I layered into a series of engraved wells. The pourable medium results in a paint that’s easy to spread with a brush, but that tends to stay in place. Thinning the paint with water was unsuccessful, since the result tended to bead up and streak on the acrylic panel. 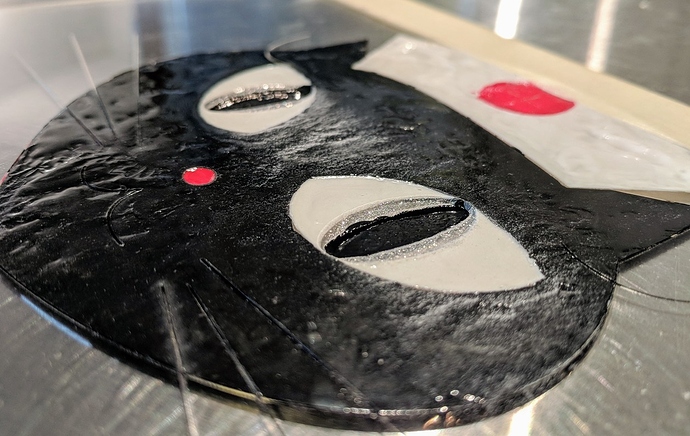 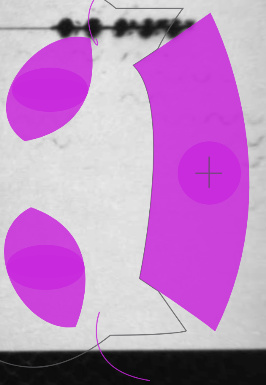 If we look at the above photo and screenshot from the GFUI, you’ll notice a series of overlapping ellipses that represent:

The individual engrave operations were ordered going from shallowest to deepest. Each engrave pass was run at 1000 / FP / 195 LPI / 0.4". Then it was just a matter of painting each layer of the panel, working from deepest to shallowest. The body was only scored and then painted directly on the surface, using the as-supplied masking material. This approach let me lay down all of the paintable areas in a single job, which was followed up with some additional detail scoring after the paint had dried to add whiskers and other embellishments.

I probably should have lowered the focus height a touch for the innermost well, there wasn’t a whole lot of height difference between the irises and the pupils.

Wow that looks sharp! Would you mind showing what the back looks like?

@Dia, I forgot to grab a photo of the back. It’s … messy. I didn’t need to worry too much about over-painting the small details, so I just scribbled the black paint on. I think if I were working with paint brushes, instead of marker pens, I would just overpaint the whole back side of the cat body in black so it looks at least OK from the rear.

I was just wondering if its like the old cel animation painted back, or if you painted the whole thing at the end with a color to cover it up. I never used oil markers before, did it cover well?

The oil markers provided good coverage for the details, but I had to make multiple passes to get the body filled in completely. I wound up looking through the piece at a light to find spots that weren’t covered. In the end, though, I was able to get full coverage. It just took longer than I think it should have and was streakier than I would have liked.

I was using the “medium” Sharpie paint marker tips, which are rounded, but rather blunt. It’s possible repeatedly press the tip into the body to flood an area with pigment, which I needed to do to fill the nose and scarf. Next time, I’ll pick up some extra-fine paint markers for detail work and use a brush for fill work.

i’ve found oil markers are not as good at large areas while doing etched tiles, too. very streaky. but they’re great for details.

I’m sure your friend was thrilled … It is really cute!

Plaid makes “Gallery Glass” and that would give it a stained glass look. I have been using in other non glowforge projects and I love it.

Amazon should be compensating Glowforge… I have no idea how many “cool things” I’ve purchased from Amazon due to suggestions on here, everything from a cardboard rotary cutter tool to paint…

I have updated the original post with info on enlarging the project and switching to acrylic paints. They worked much better than oil-based Sharpies for getting complete coverage.