A few weeks ago I was given a very generous gift by @shollg: a Seklema hold-down mat, for testing in the Glowforge. This mat is designed for holding items down for engraving by either rotary engravers or in a laser. Thanks again so much, @shollg!

I was holding off on testing it until the new low power settings were available because I was afraid the mat would be destroyed if I couldn’t dial down the power a bit. Now that low power is available, I tested the mat today. It works great!!! I’m tagging @henryhbk, @Tuck, and @johnbrooker because I think they have a special interest in holding down and cutting very thin materials, but the results are probably of interest to many.

First I tried it with some average weight (probably about 80 lb) card stock, of 0.0105" thickness. All you have to do is smooth it down on the gel-like surface. I did an engrave and then a cut (I should mention that beforehand I did some testing to determine the minimum power that would cut through this cardstock. Turned out to be 27/197/1/.01 for Power/Speed/#of passes/thickness.). You will notice that, just like when you use a cutting mat in a vinyl cutter, the surface is affected by the cutting. According to the suppliers this is a self-healing mat that will close up the cuts up to a point, although eventually you would need to replace it. Note that the flip side of the mat is the same as the front so you have two sides you can use. And before you ask, the literature doesn’t specifically state that it does not have PVC, but the mat is sold for use in laser engraving so I have to assume it does not.
Anyhow, here’s what it looked like: 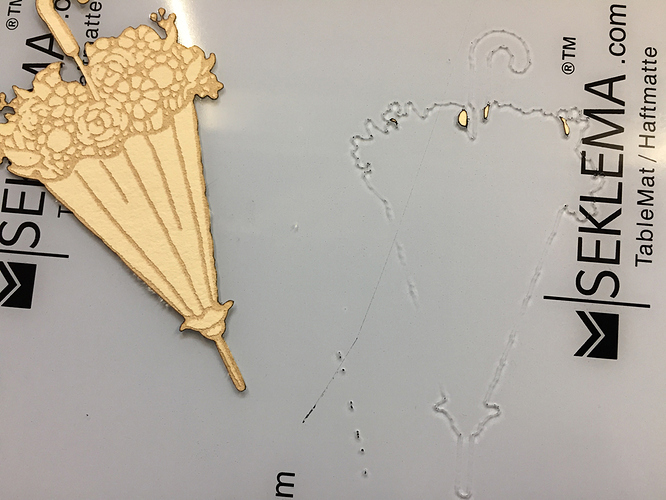 Now, I know you are asking “What about thinner materials?” So I tried to find the thinnest material that would make a good test. Got a square of tissue like that used in lining boxes and bags for gift wrapping: 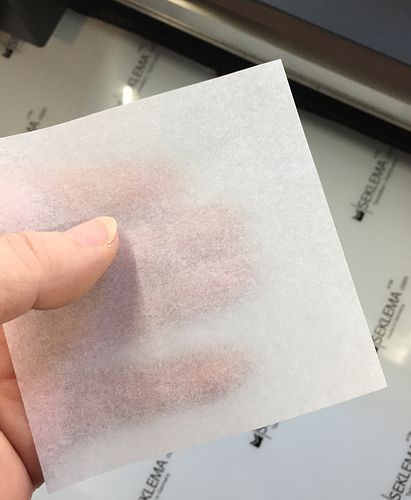 Obviously pretty thin, you can see through it. My calipers measure 0.001" but they are cheap and probably not hugely accurate.

Smoothed it down on the mat: 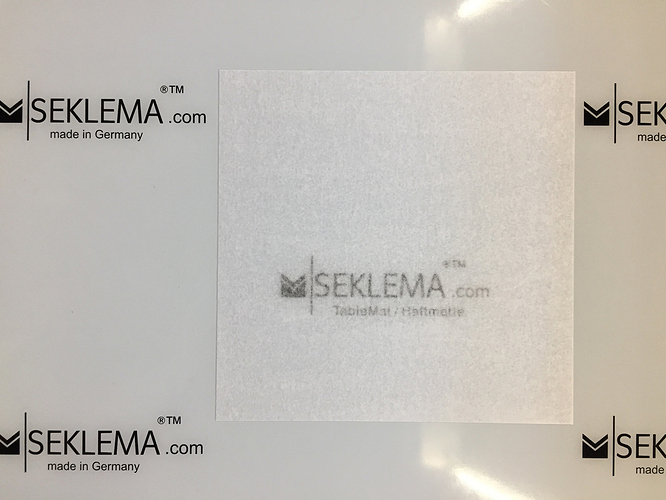 You can see the gel grabbing the tissue as you smooth it down.

The tissue peeled up with no problem, very easy: 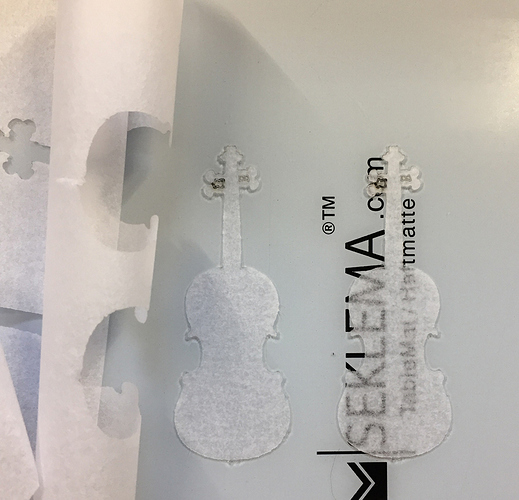 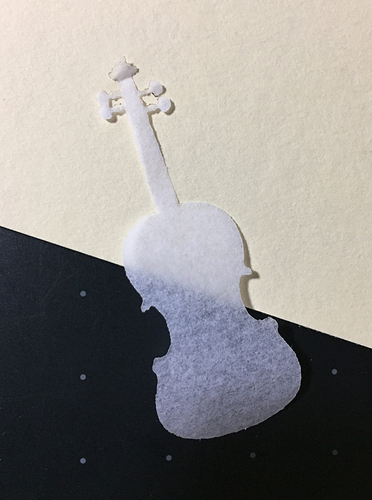 Love how clean the edges appear to be (burn-wise) - but even cooler is being able to pull something that thin up without tearing! Wow!

This is excellent information and will be something I need extensively, as a large portion of my use will be cutting and engraving paper. Thanks for sharing this!

@shollg Do you (or anyone else) have an online ordering source for the Seklema mat? Some preliminary googling points to those being a little tricky to find.

Your explorations here also remind me that I’ve been looking for a material-cutting/engraving settings chart.

Johnson Plastics for one: http://www.johnsonplastics.com/seklema-12-x-12-engraving-table-hold-down-mat?utm_source=google_shopping&m=Abstract&gclid=CMW0l-u-z9QCFUK2wAodgOACvA

I don’t know about the others, but I’ve been keeping sporadic records since I got the PRU. However, at the time they warned us that settings would probably change (as they did, a lot, yesterday). So there is no point in posting what I’ve recorded so far. If the settings can be considered stable for a while, you’ll probably see people starting to post them.

Obviously pretty thin, you can see through it. My calipers measure 0.001" but they are cheap and probably not hugely accurate.

Ooooh. Thanks. Will be getting one of those. What’s the thickness of the mat itself?

Cynd11, thanks very much for thinking of me and giving me the heads up, on what will be a very useful material.
I’ve come across similar materials when I was looking at a way of controlling silk thread through a sewing machine, (another thread somewhere

)but this is an additional source that may work out to be better for heavier work - like fan leaves ?

ha, I see what you did there…

What’s the thickness of the mat itself?

Would you like me to try it with silk? I’ve got some!

Would you like me to try it with silk?

silk fabric? I’d love you to. It’s a nice analog to using dacron which is what most of the medical grafts are made of, so I can use that in simulators.

Very kind of you.
What would be interesting to both myself, and others, I’m sure, would be at the same time to see if the laser cauterises the silk weave, even at the lowest power settings needed to cut through it.

I use a very lightweight material, almost like tissue itself, tight weave, but very thin. If you have anything like that, please try. I will also be using heavier silks, but if the laser could cut and cauterise, that would open up still more possibilities,

Yeah I think I need to start keeping better notes. Even though the settings have (and will again) change, even just a five-column spreadsheet will be better than the guess-and-check I’ve been doing.

Is there a word for the unwitting pun ?
Perhaps my sub-conscious has its own sense of humour ?
John

If there is a way to stiffen the mat, you could use it with the pass through on the Pros for larger projects.

Is there a word for the unwitting pun ?

That is awe-full enough

Who would have thought that my first actual post/reply on here would have been a pun? (I mean… other than my wife who probably expected it.)