OK this was a fun one!

Here’s the nifty trick, scaling the model does NOT also scale the thickness of the pieces, nor does it mess with the width of the laser cut slots for assembly!

You set your Ball Diameter, number of legs, material thickness, the full Kerf width for the particular material you’re using, and BAMM-O! Ready to burn!

Just like I did in the Box file, there is a second model called “Laser Paths”. These are the shapes for laser cutting with the kerf already built into them.

Notes about the design itself: The legs have two round “nodules” that make contact with the sphere/ball. The slot in the legs is actually slightly wider at the opening than at the deepest section, this is to allow the legs to rotate just slightly to meet the contour of the sphere. The legs fit on the “inside” of the ring, the weight of the sphere presses the legs against the ring while also rotating the legs slightly, and once it’s set down on a table top, it becomes stable.

That’s the theory, at least.

And an image to see a sample… 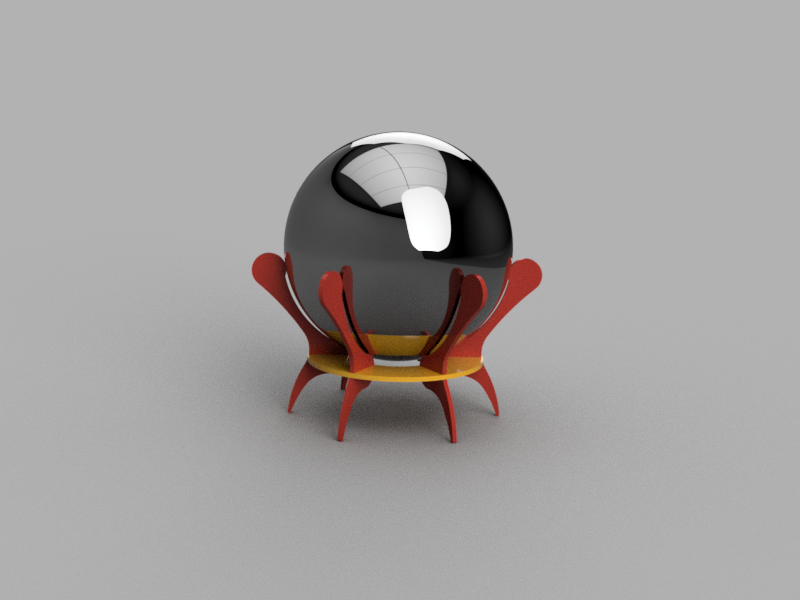 Greenbank NRAO just down the road from me has a ball bearing in one of their radio telescopes 17-1/2 ft in diameter. I’ll ask.

Awesome! Thanks for sharing!!

Fantastic job and thanks! This could also be used for a bowl stand - or pet water dish stand or bowl with flowers/plants stand…

Seriously, you should do a tutorial on this, for me… So much I could learn from this. It is 100% parametric, most of my work is about 30-50% and breaks if you go too far afield.

Ask if they have a red one. The wife likes red.

If I have Amazon Prime, I get free shipping?

Gorgeous! You could use this as an egg stand as well–I’ll bet it would fit my ostrich eggs.

Ostrich eggs, robin eggs… maybe not fish eggs, dont think the laser has the fidelity to make a stand that small.

That’s the great thing about parametric design, it can accommodate just about anything!

ont think the laser has the fidelity to make a stand that small.

I don’t know. Remember the insanely small scroll saw bowl cuts, where he cut the bowl sections and it fit on his fingertip…

I don’t know. Remember the insanely small scroll saw bowl cuts, where he cut the bowl sections and it fit on his fingertip…

If it doesnt pan out for fish eggs, maybe rollie-pollie fish eyes will work.

very cool work. I have tried to make some adaptive stuff but it always just turns into a mangled mess

Thanks! Yep, that’s why the first parametric box I shared had 40+ versions.

Oh man, it’s beautiful out there (did a couple of research trips out there in college) – I’ve always wondered though, how is it to live in a radio quiet zone?

Not trying to answer for @rpegg, but I’ve been there many times, it’s a beautiful part of the country. Tom Scott did an excellent video about some of the interesting aspects of living and working there:

Hadn’t seen the video before. It’s accurate. My place is in a corner of the quiet zone and the only restriction relevant would be if I wanted to put up a ham radio tower or the equivalent. Mountains create sort of a bowl in which NRAO sits. The restrictions are significantly relaxed outside of that.

Edit: Not sure what the future of NRAO will be. It was created and has grown due to the support of former Senator Robert Byrd of WV. He was a chair of Senate Appropriations for a long time. Byrd passed while in office not that long ago.