My wife and I decided to invest in a Glowforge. We are so excited planning projects and trying to research and discover how to use this to personalize and add something extra to handmade items.

Does anybody know if I will be able to use the laser to personalize hand turned wooden pens?

On other laser systems, there is a rotary type attachment that rotates the pen while the laser engraves the text, but I wondered if this sort of thing would be necessary on a Glowforge since the laser can auto focus as it engraves?

I believe you can effectively engrave side at a time.

Right - one side at a time.

@dan how far around the curve of the pen body will the GF be able to maintain focus? I fully understand only being able to etch on one side at a time, but would like to understand should a pen be considered as having two, three or four sides if it were to be engraved all the way around?

I had the same question. This was my primary reason for investing in the glowforge as it is the #1 request I have for my turned wooden pens.

I asked support but they were unable to confirm.

Based on everything I have read and watched (and now that Dan has mentioned it should work) I feel much more confident in it. Since the focus appears to have been maintained on the edge of an ipad / pc, I would assume that the side of a pen would be just as doable since it has much less of a radius.

Awesome! It’s so cool that we are getting answers to our questions.

I think most of the engraving that I am envisioning would only require one side of the pen being engraved. I turn a lot of wooden pens as gifts and the thought of adding someones name or business logo to a turned pen is very exciting.

This is going to be fun!

I received this response back from Dan in another discussion regarding pens.

The focusable depth is 0.5", so you can definitely do the top surface of a pen.

That being said I’m not sure how well it will work when you get to the tangent of the pen and the laser. ie the laser will be hitting the surface at close to 180 degrees once you reach the edge of the visible pen. I’ve no practical experience to judge this, just picturing it in my head and thinking it can’t be as effective as when it hits the surface at 90 degrees.

I’m curious about this too. If the Glowforge will be able to read the previous engraving and adjust, that would mean that rotating the pen 3-4 times to do the full circumference (if that’s even a thing you want to do) wouldn’t require a bunch of fiddling and precise alignment, which would be the majority of the annoyance with such a task. It sounds like the system can realign itself on flat surfaces, like a belt, so as long as the software is up to the task of doing it in the round, this should work just fine. I’m hoping that it can!

@robstach2 I looked for a picture of one of the pens that I turn on my phone, but I can’t find any! That’s weird because I turn at least one every couple of weeks. Anyway, I did find a picture of the last project I turned. 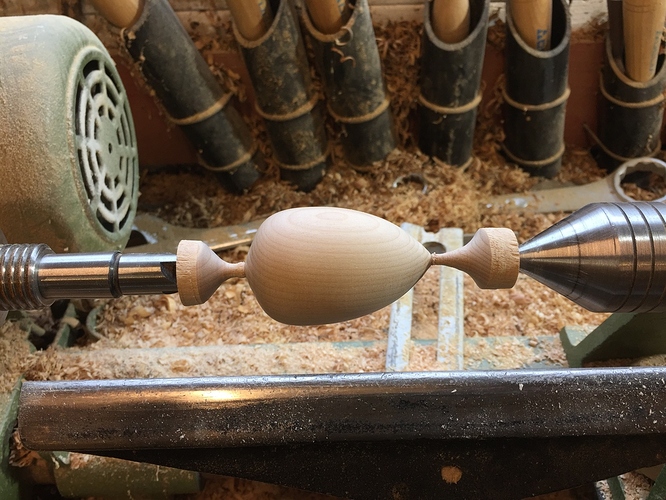 image.jpeg1154×866 401 KB
My wife requested some wooden eggs to help train some chickens to lay in the nesting boxes.

And @Jamie, I wondered about the same thing as you get about when the engraving gets close to the edge of the pen. I also wondered if we will need to project our text or logo onto a cylinder shape so that it’s not distorted when it’s engraved, or since the Glowforge is mapping the surface, will that sort of thing be unnecessary?

Regarding pens: I am simply looking to etch a name into the side. No plans on going around the pen.

Probably not feasible without another axis anyway. Would be nice though!

As long as the engraving stays in the middle third of the pen (the short way), you should be fine. Great suggestion about using image recognition to track pen rotation too.

Shall I send you some pens to try?

This is one of the main reasons I purchased my Glowforge. I also turn wood and acrylic pens, and when I saw that the system has optical recognition, I figured I could fabricate a small rotary non-mechanized jig. So you simply put the pen in the jig and engrave a portion, then turn it slightly, let the system recognize that you in essence, moved the material, and let it continue etching some more.

In theory, shouldn’t this work the same way as feeding a piece of material into the passthrough? The machine sees a small portion of what it just cut, and picks up where it left off. The machine should detect where you left off as long as you have some of the design showing still on your pen, just on a smaller scale. Will the camera be able to detect where you left off on such a small object, or will you have to use the high res scan? Is that even possible, or is the only optical recognition source the camera on the lid?

Yup, just some software to put in the feature request hopper.

Hardware Addon - Idea Everything Else

I have an idea for a simple rotary attachment/addon. You wouldn’t be able to engrave a rolling pin or baseball bat, but maybe a pen or set of drumsticks. It would be fairly simple to build, you could even use your new glowforge to cut the gears! Basically it is a micro stepper motor attached to a pair of rollers. An arduino attached to the motor and an IR sensor. It doesn’t need any physical connection to the glowforge. My idea is that you use the laser “defocused” to send a pulse to the IR sen…

I saw that thread @bwente and I like it. I think Glowforge should use it’s own proprietary addon hardware using Bluetooth. I would pay a premium for that. I really don’t want to research and get into Arduino to make one. But maybe you could put some finishing on your product and sell it to Dan so he can implement it? Hint hint. I mean, why reinvent the wheel? It would be just like DOS… But that’s a different subject. I would love a working rotary attachment but I wouldn’t mind advancing the cylindrical object a step at a time either.

I was thinking to use the glowforge to cut a rotary jig that can be turned by hand for this purpose. I’d a 360 degree etching on glass one day!

I don’t think a glass will ever work on this. The beam can only focus on objects up to 1.5 inches tall. That’s why @bwente made his design so flat I’m assuming.

Maybe he means a glass rod

, don’t know why you would want to, unless it was a glass pipe turned into a pen! Hint hint