Pre-Release | Of Course I Still Love You

Rockets. Everyone loves rockets. What makes a rocket cooler? Landing. Vertically. From space (Okay upper atmosphere… But still.) What’s even cooler? Landing a rocket from space on a ship. Not any ship- A DRONE ship. 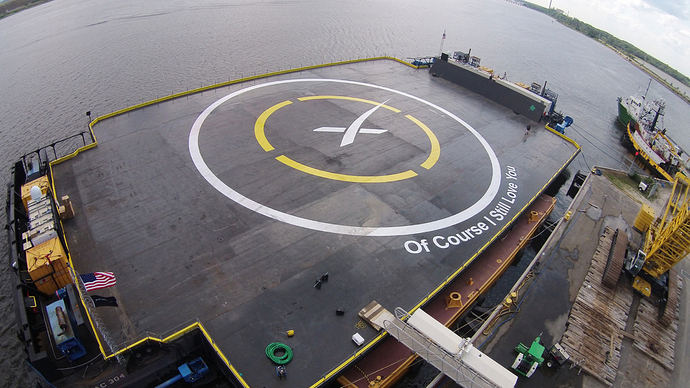 So this is where this adventure starts. This story will have happiness, nerd rage and glee. 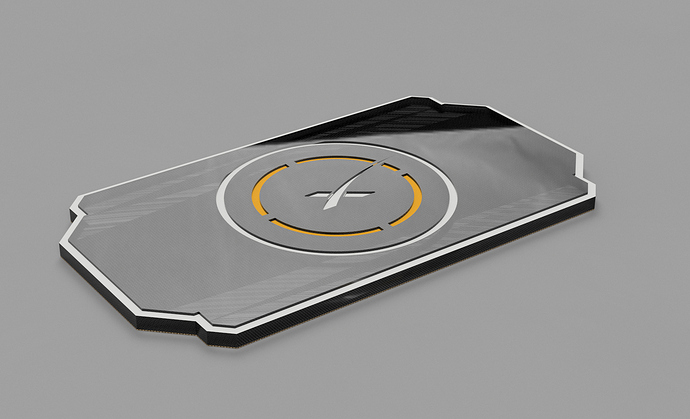 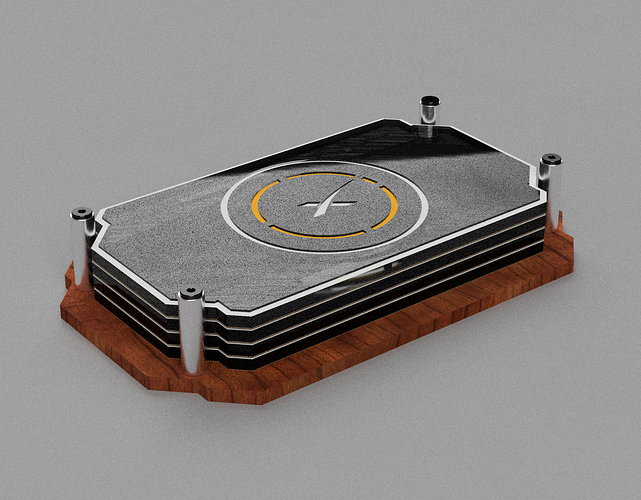 I created a sketch and use the project tool to move all the details to one ‘layer’ and export it out as a DXF. Then import into Illustrator. This is only so I can add the text, color code and group up stuff so things get cut out in the order I want. Once I was happy with the layout I saved it as a SVG then send it out to the UI.

I hit the print button in the UI and see that the op is going to take about 2hrs. Okay Cool. Hit the button on the 'forge and and handled some support tickets for work. About 1.5hrs into the op I had to goto the restroom. (You know, typing that out on a forum seems- weird. But the point is I walked away from the 'forge.) I get back and noticed that the office is quiet. I look in the unit and find this. 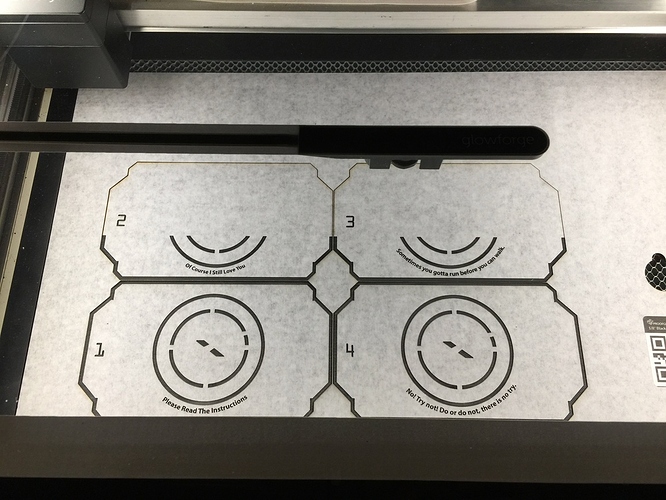 Seems like the glowforge wanted to take a siesta.

I went into full nerd rage super saiyan 3. One. That was the last piece of black acrylic I had. Two. Why fail at the end? Why do it when I leave? (Anyone who owns a CNC or 3D Printer will understand this. Seems like these machines plot failure when you are not looking so you can’t see that the hell happen.)

Anyway. I was pretty done with it for the day and left it alone. The following morning my wife asked me I could do the same thing I did a couple years back when a friends CNC failed during a job.

Context : He was cutting out a irish family crest logo into a table top. His he was a little over 50% when his CNC died. And the top was supposed to be picked up 2 days later. So he called me and asked if I could finish it. I went over to his house and grab the table top and he have me the gcode he was using. Got home, loaded up the gcode in OpenSCAM (pre-fusion 360 days) and scrubbed thur it to about the point where his machine crapped out. Then truncated the gcode then ran it from there. Completed the job perfectly.

Well here’s the difference. The Glowforge does not use gcode. It uses magic. So- How do you append a failed op with machine that uses magic?

So the things I have. I have the source file and the part. I alt-tabbed to Illustrator and rescaled the image on my display to the size of the part that’s in my hand. 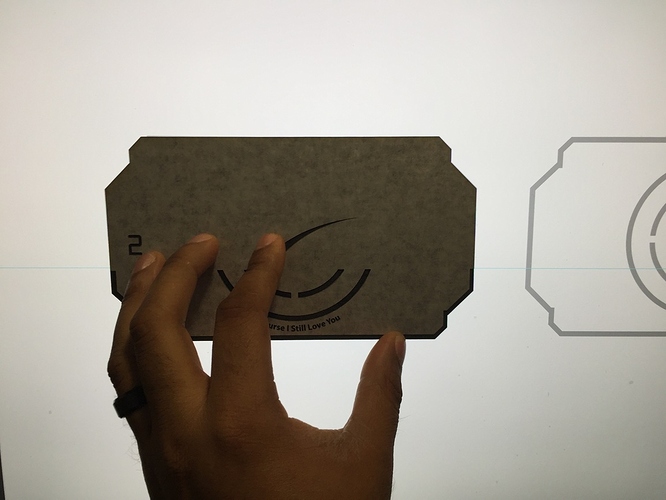 Then used the guide rule to line up to where the failure happened. Then used the trim tool to remove the area that was already engraved. Then removed the other assets that’s already been engraved. But I kept the cut line intact.

Loaded the 'forge with a fresh sheet of cardboard. Used some magnets to keep it in place.
I set the engraving to ignore and set the cutline to cut. 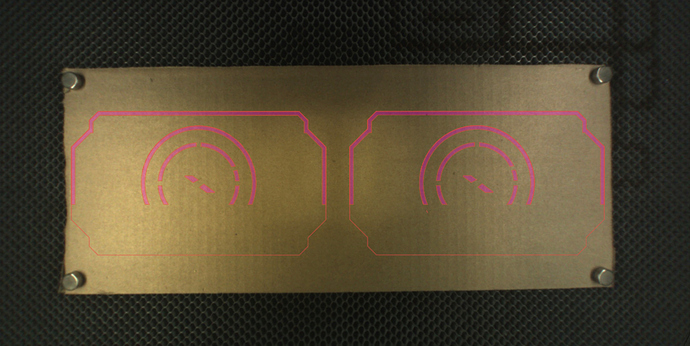 Pulled out my weeding tool so I can pull the inserts out with disturbing the jig. 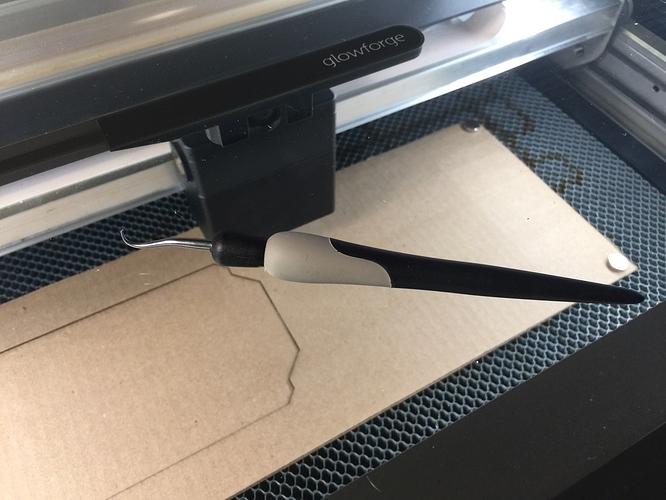 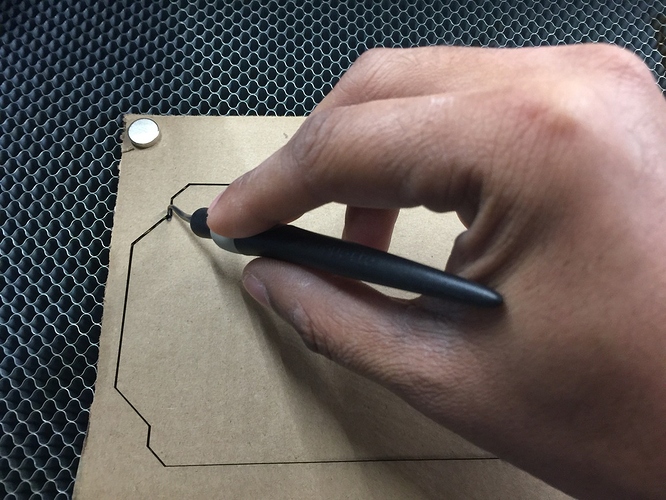 Now I set the cut line to ignore and set the other asset to engrave. The picked ‘black acrylic 1/8"’ in the materials menu. Then loaded up the failed pieces. 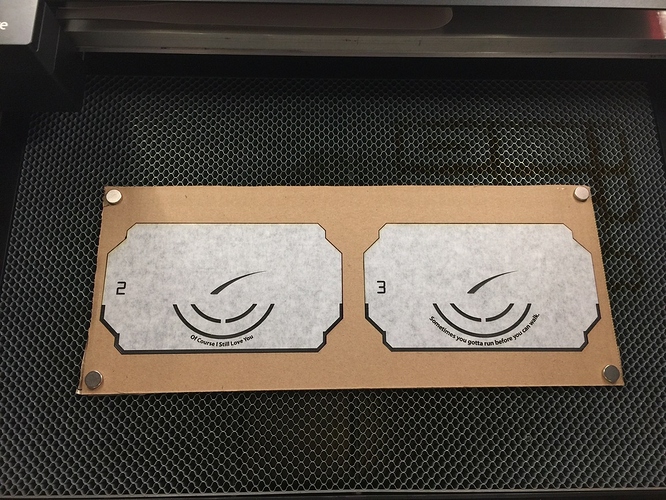 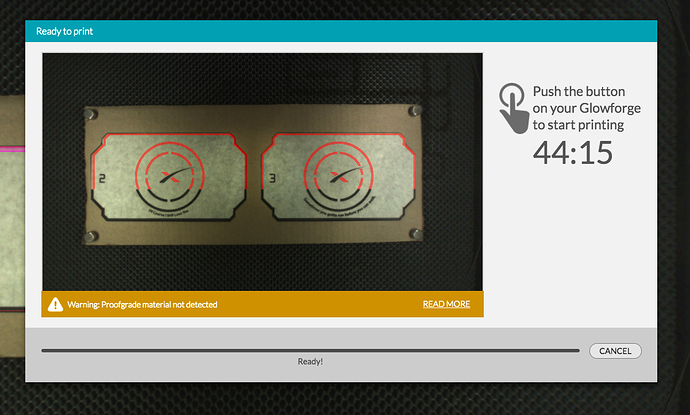 Okay- I must have watched that preview playback at least 10 times before I pressed the button on the 'forge.

Okay- Lets do this. 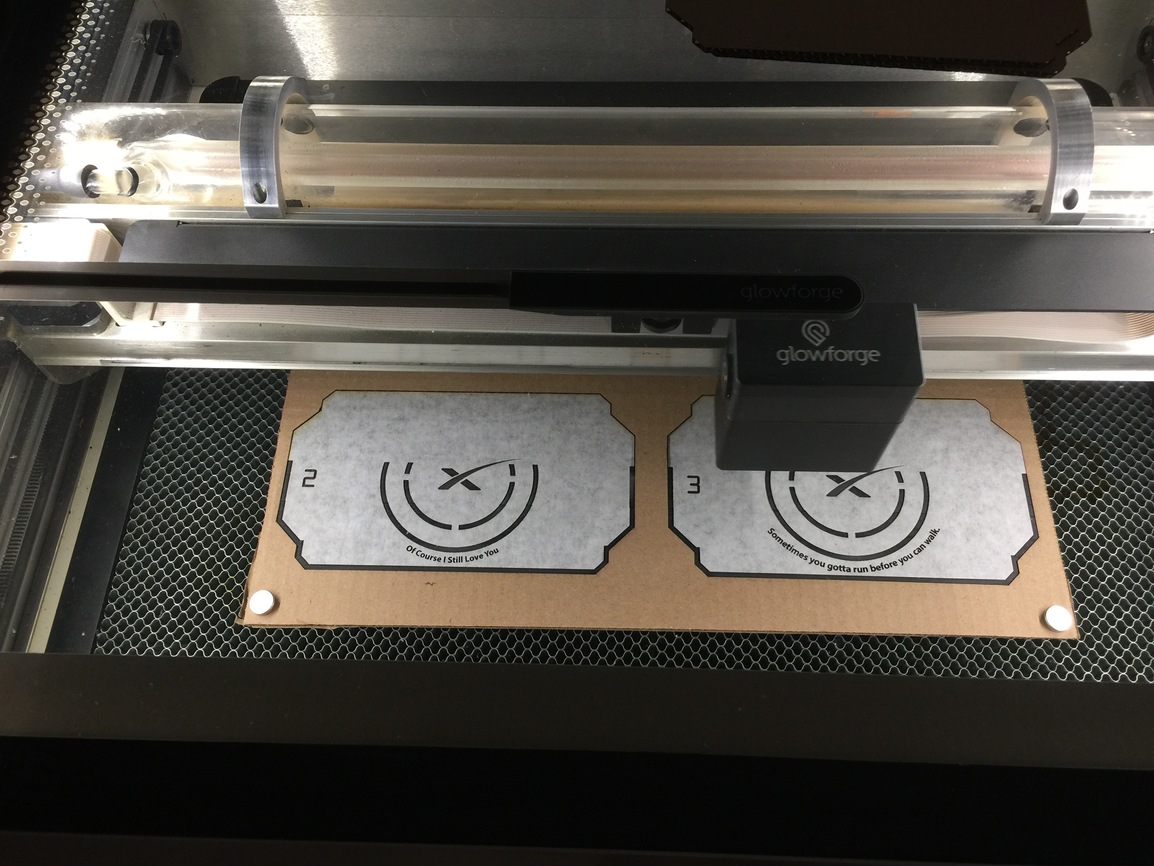 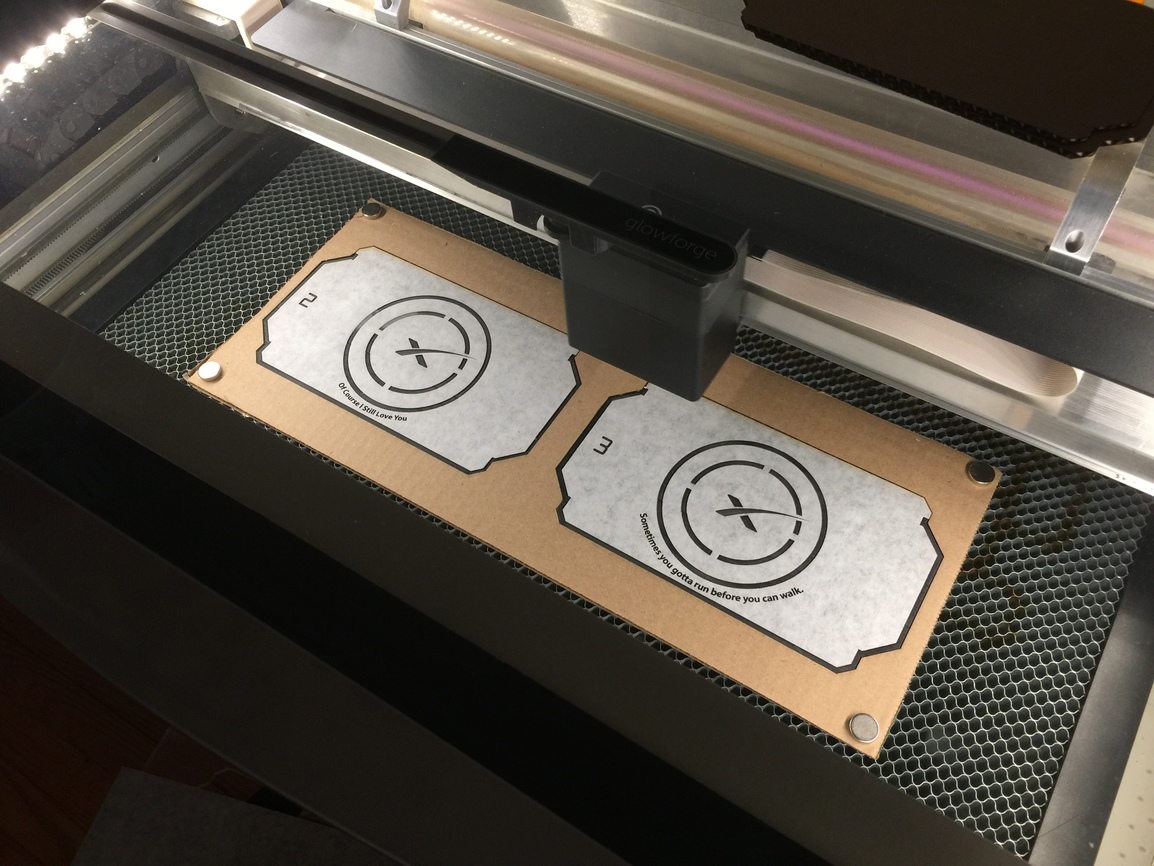 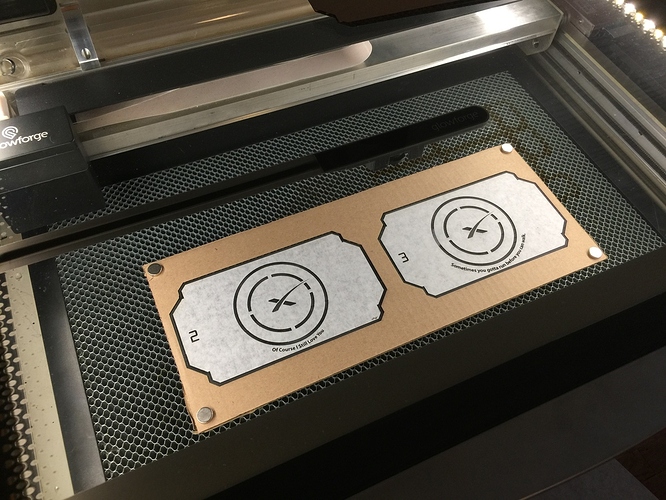 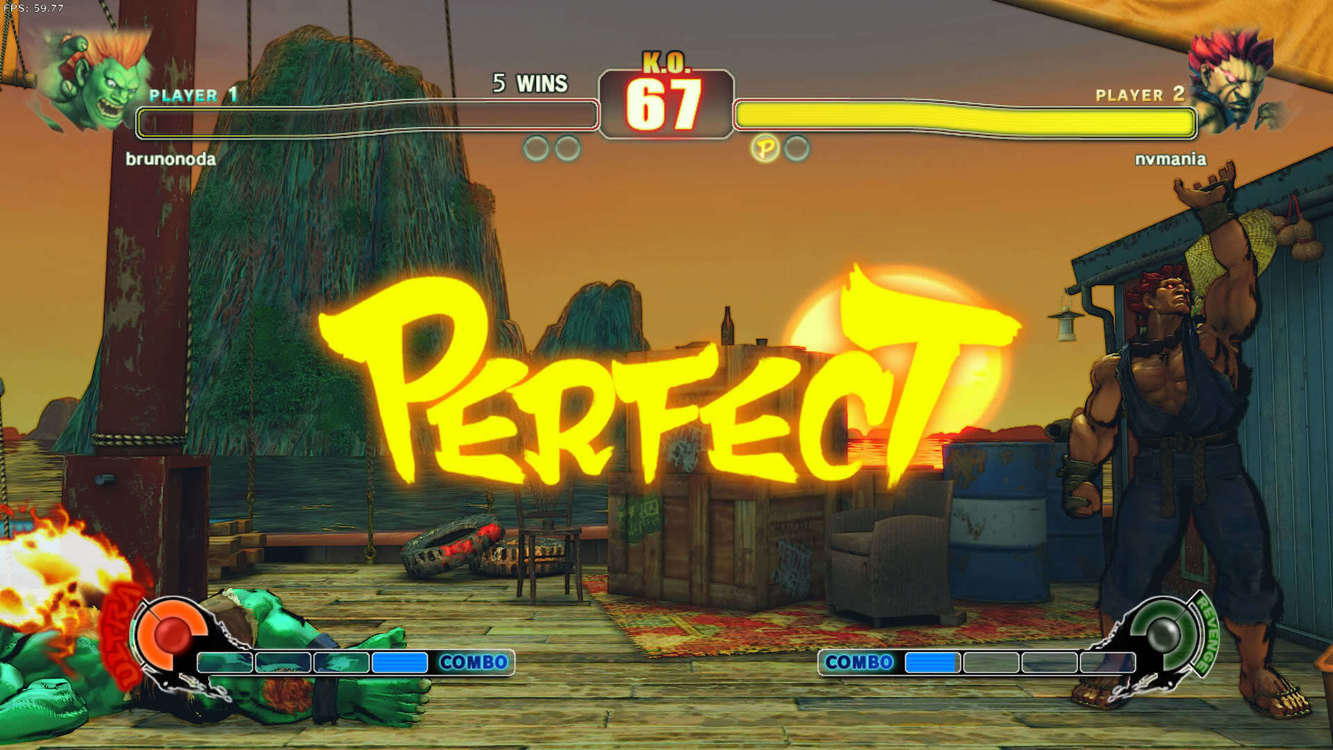 Okay- Not quite. But pretty damn good. I mean the other option would had been to scrap it.

Now that the band is back together, I gave them a paint job. 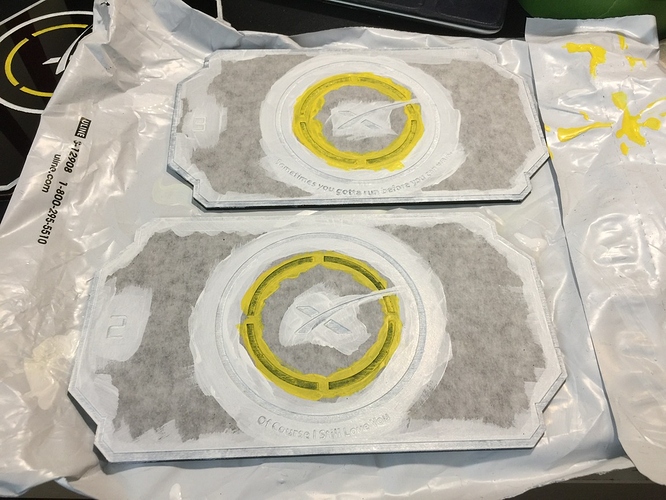 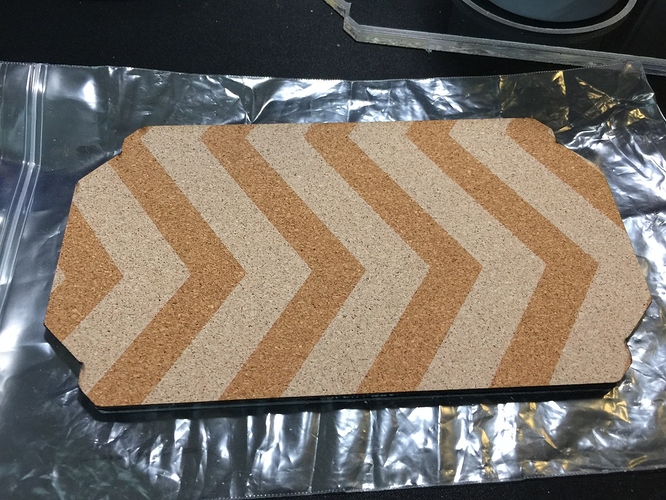 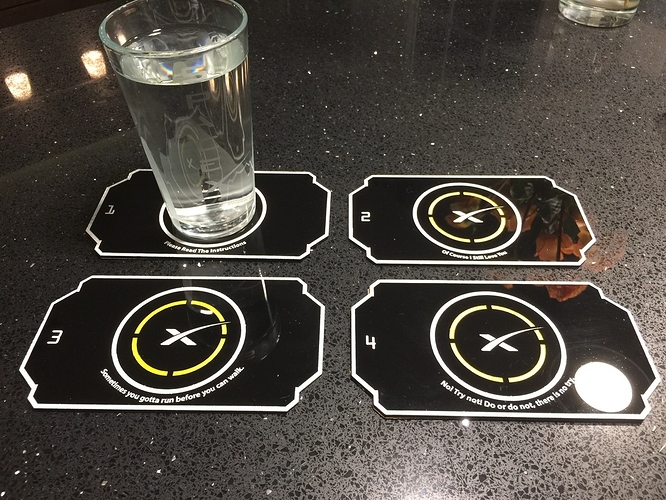 It’s not if you get done right the first time, but when a failure occurs, can you pickup the pieces and make them work…

Fantastic walk-through and I

Excellent!
Now you just have to practice throwing glasses at them until you can land them in the middle every time.

That is seriously amazing!!!

Really neat writeup and inspiring build. Would that have been Monday evening sometime? It seems like a major push came through somewhere along the line. UI changed slightly. Some errors came up when I tried to print. First I’d seen like this. Turned it all off and logged off and came back later and all was ok. I wasn’t in the middle of a print though. Nice recovery.

Yeah, you transformed a failed job into a great tutorial, and they look just amazing!

The Glowforge does not use gcode. It uses magic.

These are great - love that you have the patience to paint before lifting the mask. I’m always so excited to see the engrave that I dig right in

great write up and I appreciate the humor in the thread

any reason for the crap out (at first I thought heating pause) ? or is this one of the gremlins in the machine

Next level coasters! I love it! @karaelena have a friend that works at SpaceX. (and have been lucky enough to tour it!) Once I show her these, I have a feeling she may want a set!

And sooooo true about CNCs dying as soon as you walk away. Every successful cut I ever did was while I babysat & just watch. Gotta pee? Kiss that cut goodbye! LOL

Great project, expert troubleshooting, super fun write-up!! Thanks so much. Those are the coolest coasters ever…nice landing with that glass too.

Very impressive recovery on your part – congratulations! They look beautiful.

Even if you say it’s not perfect, it certainly looks like it is from the pictures! Nice save.

Or to start proofreading more.

Nice save! And that GIF is hilarious.

The thing I’ve learned from my robotic lawnmower is it never misbehaves when watched. When left to itself, it mostly behaves, however it will sometimes get into no end of trouble. They’re like teenagers.