Preparing to Print is now Taking an hour -

My problems began with that Last Update it was the Glowforge Killer for me anyway.

I was under the impression that my machine that was fast and damn near perfect was going to be even faster as they took away the Cut Window , but for me the NEW UPDATE has been a few steps back.

Preparing to Print is near broken.

The only way I can get it to work now, is to print, cancel, print cancel Dismiss print cancel.

The Bug can be repeated over and over again.

Im using safari, on my Mac running High Sierra, what am I missing. ??

Have you tried Chrome? You should be able to use whatever browser you want, of course, but just to narrow things down and see if maybe they broke something Safari-specific, it’s probably worth changing one of the variables to see what happens. In the early days of Glowforge, it was pretty much unusable in anything but Chrome, and I wouldn’t be surprised if that still gets the lion’s share of testing.

I have been having issues all day today. I’m using Chrome, and the GF app has been crashing, stuck at “Preparing your print”, will act like its done scanning my media, then “glitch” and shows the material used of my LAST job, yet has my new cut upload displaying? Software has been stuck…

I also just spent some time cleaning and tidying up some parts in the troubleshooting steps since I can’t laser. Over 30 minutes of it sitting on preparing your print.

I also checked wifi stuff, all good on that end. Wonder if something is up on the GF side…? Figures… had my day cleared to work on my list of projects to cut! Guess I can go clean the house while I wait 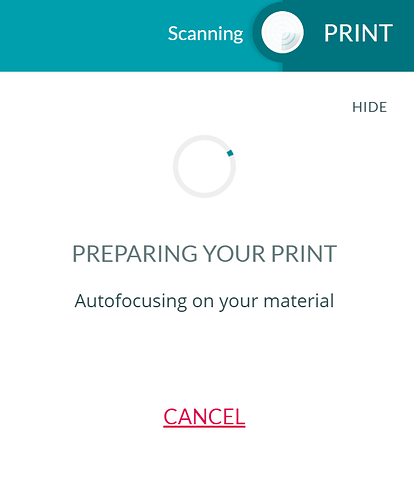 Same is happening to me.

I would pay MONEY to have the OLD update back with the CUT BOX !

Who else misses the CUT BOX and thinks there machine is now slower. cant be just us

Sorry - I adore the new update. I prefer it without the cut box and I had things moving really fast yesterday all day.

That is great to here, which means my NEW MAC hates me, thanks.

Do you use chrome, what OSX are you using ?>

I’m using Chrome on a Mac with Mojave.

Thanks a lot for letting us know about this, @coalakida. I’m investigating this now and I’ll follow up just as soon as I have more details.

Slow here, too. Definitely faster before the update. Have had a few files not upload when sent to print. A lot of paths, true, but before update it wouldn’t have blinked an eye. After, not so much. Regardless, every file I’ve printed since update has taken more time in general to render and print. I used to be able to count how long it would take from upload to print - now it seems like ages, not 10 - 15 seconds. Mac running Chrome, both updated to most recent versions.

Ok the problem is exactly the same on both Chrome and Safarri, However I am using High Sierra, please post what you are using so we can see it that may be part of the issue.

The fix for me is not wait for the print to autofocus but to cancel the print and print again
still takes a long time but it does not stuck.

Good to know that more people are having this problem, my workflow is so slow now because of the delays , renders, scanning, printing, everything takes longer and it really adds up.

Thanks for the additional details, everyone.

We’re seeing this, too, and the team is looking into it.

At this time I don’t have any reason to believe that workflow, browser, or operating system will have an impact on the issue. I apologize again for the trouble, and I’ll add to this thread when I know more.

I was having the same issue today as well. But mine started with it messed up when it calibrated. My first cut was about 2 inches off. I quickly paused the print and cancelled it before It ruined too much material. After a reboot the alignment was fix but it was super slow or even hung during the focus part a few times. After one more quick print of 30 seconds it went into cool down mode. I think it lost connection at that point because the UI stayed that way until about 10 min after the machine was turned off. That was this morning before work so fingers crossed it’s better now because I have to finish up a project tonight.

I had no issues today, but only did two small jobs. Maybe tomorrow I will hammer out more and give some feedback

Ran a number of different prints today and all three seemed to go through all steps faster than previously reported. They were mostly text and basic shapes, but still much faster overall. I’m crossing my fingers that they’ve found what was bogging down our machines