Is there a video showing how to clean the printer head fan, the pictures are not enough for me to follow. Thanks

I’ve done it, but don’t know whether anyone has a video. Are you talking about the little tiny fan in the head itself, or the air assist fan on the same metal bracket as the head? For the little tiny fan, I would remove the head and detach the white ribbon cable. Then carefully remove the magnetic lid and mirror under the lid. Remove the lens from the bottom of the head with the lens removal tool. Carefully clean and use compressed air to blow the fan and housing both inside and outside. Reassemble exactly as before. This is not an official procedure or recommendation. Just what I might do.

For the air assist fan there are instructions under the Support tab of app.glowforge.com

A good video would make it bullet proof . Removing the lens must be the key as I had a fan error telling me to clean it .
Thank u

Again, just to be clear… The fan errors I have heard about were for the air assist fan. Is yours the head fan?

The head fan is the approximately 1" diameter fan that you can see as part of the head once it is removed. Didn’t know that they enabled tachometer readings on that one for monitoring. I found this post from Support about cleaning that fan. Personally I would pull the mirror and the head lens first so as not to deposit gunk on those with the compressed air. Though I guess if the lens is pushed all the way up it will block gunk from getting on the upper mirror and the instructions say to clean the lens as a last step.

I’m so sorry for the delay in my response. Thank you so much for your patience. We recommend using canned air as follows to clean the fan on the Printer Head: Turn off your Glowforge. Grasp the printer head as shown, and pull gently up and back to disengage the magnets and remove it. [image] Use the “Install” end of the lens tool to push the lens all the way to the top of the head. This will reveal the inside of the fan. Use the canned air to blow the dust away from both sides of t…

@coalakida could you let me know what the error you encountered said? I expect that it’s an alert that refers to the Air Assist Fan. You can find cleaning instructions for that here: https://glowforge.com/support/topic/cleaning-service-and-moving/clean-air-assist-fan

Unfortunately we don’t currently have any video guides for cleaning your Glowforge.

Didn’t know that they enabled tachometer readings on that one for monitoring.

For the small fan in the laser head (purge fan), there isn’t any monitoring. (If you look at the fan, you’ll notice that it’s only a 2 wire fan, not a PWM fan.) Cleaning the fan using the instructions you linked, however, is a good idea if you notice exceptional amounts of buildup on the fan.

This is what I am getting, is that the same fan ? 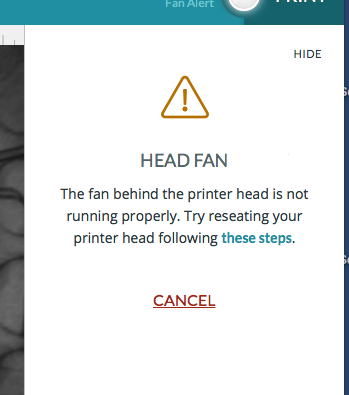 I have just read somewhere that using magnets to hold down material may be causing the problems, it that true ?

Why after all this time would that be an issue. ?

I have just read somewhere that using magnets to hold down material may be causing the problems, it that true ?

Rare earth (neodymium) magnets of sufficient size can cause the head air assist fan to stop until the head moves past the magnet. Most of mine are fine with the exception of a set of ones that are about 2mm thick and half-dollar sized. Those will stop the fan.

When the fan stops the machine detects a fault and stops the print and tells you to try cleaning it. You’ll lose the project you’re doing.

It just started happening because they recently enabled monitoring of the fan. Previously it was probably stopping the fan but the head kept going and then the fan started again. Now the head stops.

It looks like they did that because if it’s a dead fan, it’s bad as there’s a chance that fire will be able to build up instead of being blown out as the head moves.

Solution is to not use magnets in the field of the material where the head will go over them or use smaller magnets or a non-magnetic shielding foil on top (you can get that from Amazon).