I received my Pro Unit yesterday (WHOOT HOOT) but I noticed that the front Pro Shield (I am choosing to keep it in place to reduce odor from escaping) prevents the front door from closing all the way. The injected molded part of the Crumb Tray in the front has a flange (for ease of handling) but that flair is just a little too high and the Pro Shield hits it just enough to prevent the door from closing completely.

Any suggestions that anyone has done? I am considering grinding down the finger flange just a but to accommodate the width. Its just plastic and appears to be cosmetic (slightly helpful in removal of tray) so I do not see any issues, but wanted to get feedback before I take a grinder to my new baby.

Thanks for your help & suggestions!!! 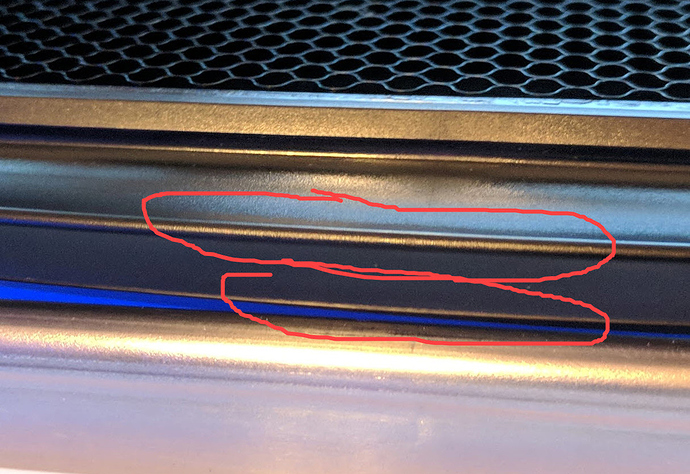 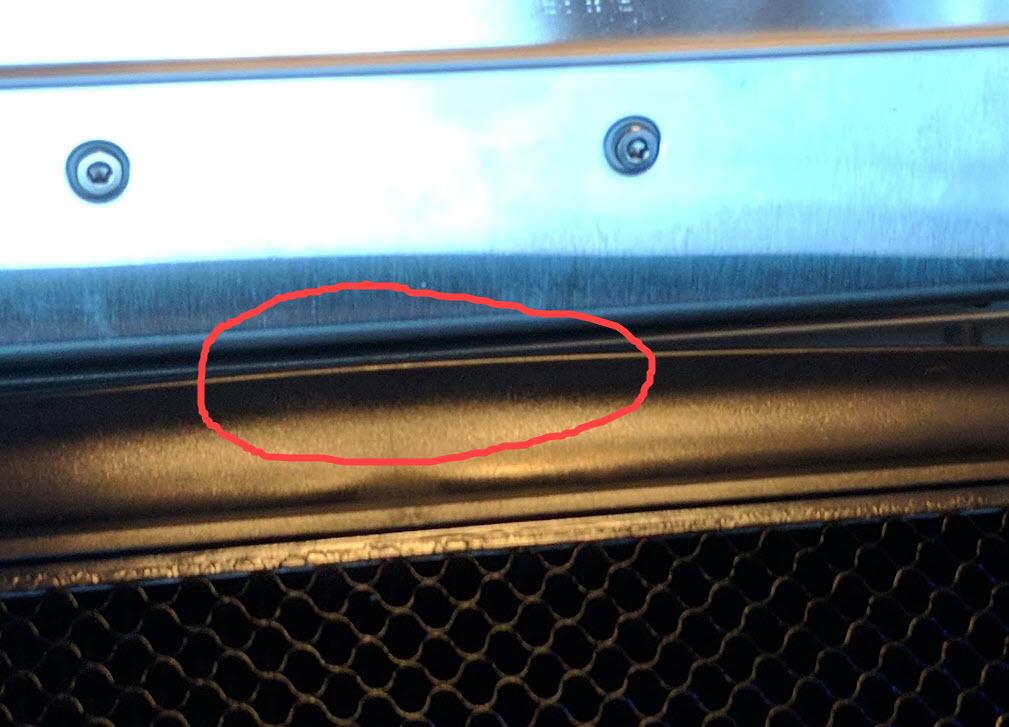 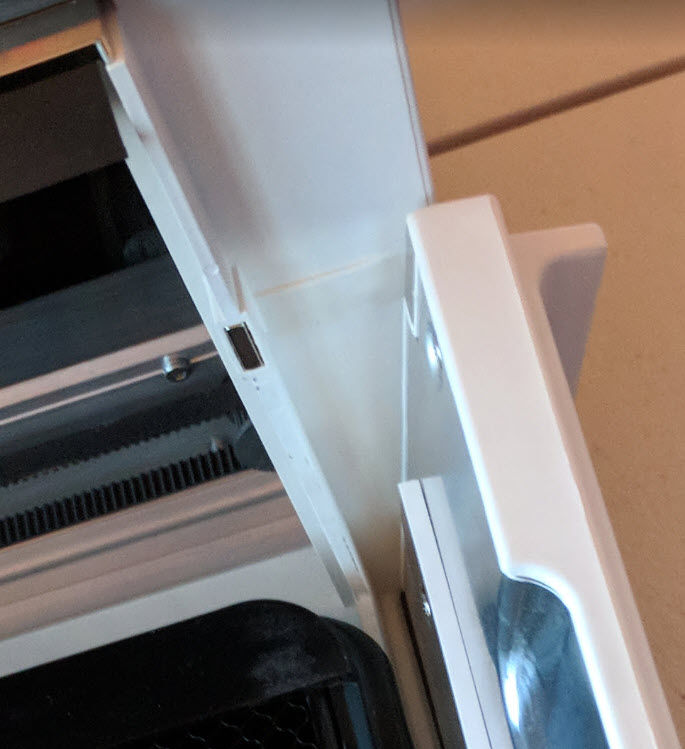 Can you shift the tray back (or forward) just a hair in the dimples? (First thing I’d try.)

I tried moving it around, and making sure there were no crumbs in the divots. No matter how much I wiggle things around it will just not close with that front shield on. It needs about an 1/8" it appears to close correctly. Thank you for the suggestion though.

I have the same problem. Just super snug fit, but continued to close bottom door and was able to get it up to the magnetic latch.

ya mine is a bit more “snug” it wont let me close it on the right side, if I push any harder I’m afraid I’ll hear a dreaded “SNAP”.

What, you have shields? I have my Pro but no shields. Duck tape is my smoke guard. I wonder when they will ship mine. I see a date for my filter in the long distant future but no mention of the Pro shields.

There is a thread on this if you search “Pro Shield” the earlier units were shipped without them and GF will be shipping them later. On the more recent units where they had received the shields they went ahead and included them in the units.

Yours should ship soon, please see thread for details.

The Pro shields have only been shipping installed for about 3 weeks. Got mine the day before Thanksgiving and had the exact same problem. I noticed one of the screws on the shield was either bent or installed at a slight angle. If I loosened the screw just a little the shield would move enough that the door would close. Contacted support and they sent me new shields but before I could install them the door or unit had changed position just enough that it now closes. Still is tight against the crumb tray but it closes. Without the shield the door closes very nicely.

BTW: the new shield is sitting on the shelf and will likely never be installed.

Oh… the shield space! I’ve ducted the h*ll outta my Pro and thought I was just destined to have some smoke anyway… maybe leftovers when it opens or some tiny hole I haven’t found. It never even occurred to me that it might be leaking out of the pass through.

Nothing is supposed to be leaking out of the passthrough. It should be under negative pressure, so any place there are gaps, the air is being sucked from the room into the Glowforge. That’s the theory anyway.

im amazed how many people talk about smoke leaking. I have not smelled even the faintest thing while the machine is running even when using the passthrough.

If the venting is proper they shouldn’t be able to smell anything, while the cuts/engraves are being performed. Air enters the GF through every crack in a properly vented systems and exits the vent hose. Assumes limited length or restrictions in the vent hose. Assumes that the vent hose and all connections are perfectly sealed. Assumes the house doesn’t have a negative pressure that sucks external fumes back into the space (for example; forced attic vents).

Zero smell here until after the fans stop. Then all bets are off. Residual smells or smoke are free to enter the room.

I’m truly amazed by the “zero smell” reports. I have taken extraordinary measures to seal my Glowforge’s ventilation and I’m still getting enough of a smell from it that I’m sure it’s not just my overly sensitive nose. It’s much better than where it started, but I can’t imagine what else I could possibly do. I even bought a special smoke wand for detecting HVAC leaks and found nothing.

It is a very snug fit, I pinch both sides of the hatch closed and it does close all the way but it moves the crumb tray slightly, not sure if it puts it out of alignment or not but I’ve been using it just fine.

Also, I never smell anything while the machine is running, with or without the shields, but as soon as I open it then lingering fumes escape into the room. I’m thinking of installing a duct fan or something to keep the airflow going. I put an air purifier into the room to get rid of the lingering odors which does a good job.

No one is saying that there aren’t smells. My space does have an odor from when I lift the lid and smoke reenters the room. So if the room smells a little to me, it might smell a lot to you. But if your smoke wand doesn’t show any air entering the room from unit cracks or vent seals then I’m going to bet it’s coming back into the room from the external vent or it is from residual smell.

No one is saying that there aren’t smells.

I have not smelled even the faintest thing while the machine is running even when using the passthrough.

If the venting is proper they shouldn’t be able to smell anything, while the cuts/engraves are being performed.

Now I am talking specifically about the smell of smoke or melting acrylic that pervades my room while the machine is running. I understand the materials and inside of the machine have a lingering odor. That’s not it. 10-15 seconds or so after starting a job, I can smell it.

It’s possible it’s coming back in. I have this style of basement window with built-in vent opening. I’m not sure if the internal construction has gaps. Perhaps when I take everything apart for cleaning, I’ll be able to do a more thorough investigation. 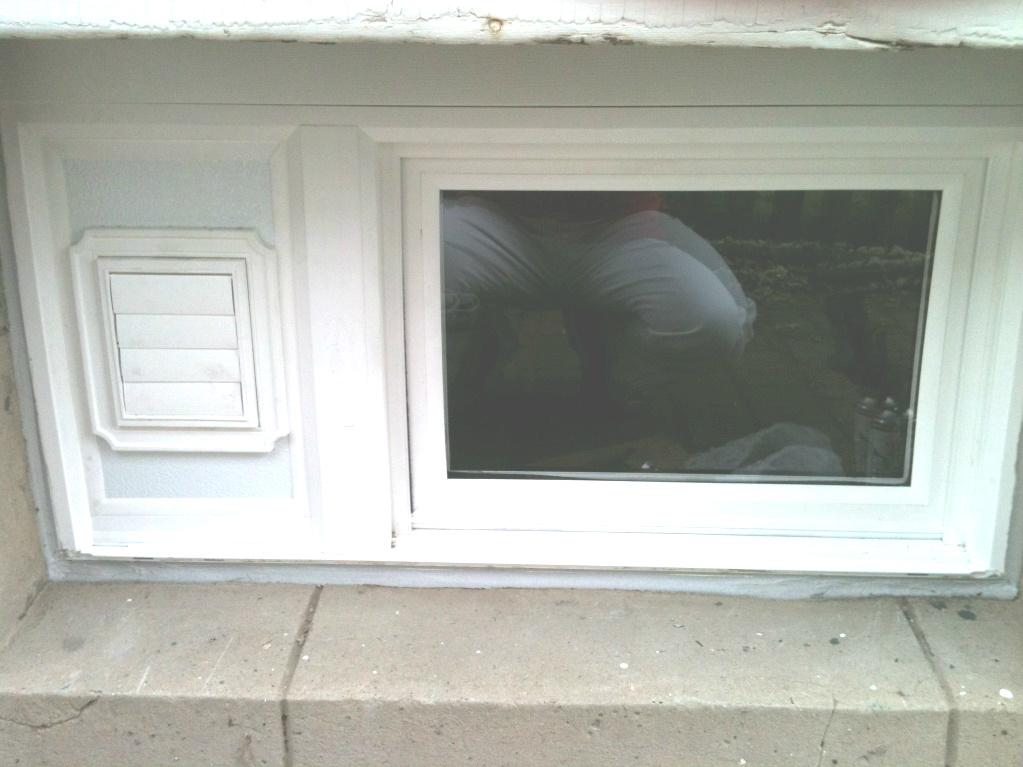 Well, it may just be what’s left when I open the lid then. First day was bad, but we didn’t have it sealed well. Too impatient to start.

It was bad enough that my husband removed all his brewing supplies to another room for fear of off flavors in his beer. Then we sealed it well and only get faint whiffs now and then.

I adore the smell of the maple burning. Probably should stop deliberately stepping outside while it’s burning.

Still, we are going to apply the silver ducting tape (aluminum tape?) to the pass through and see if it improves… just in cases.

I, also. I’m not saying I get overwhelmed with malodorous fumes or something. But with every unit I’ve had (and I’ve had a few, mind you) I’ve smelled the smell of burning $material while cutting. Certainly, as you’ve said, when opening the lid I expect that. And, yes, it’s way stronger when I open the lid. But if I were blind and deaf (and floating in the middle of the room so I couldn’t feel any vibration or something), there’d be 0 doubt that somebody was cutting something in the Glowforge. This is especially true when cutting acrylics.

Hey, I heat with wood exclusively and my nearest neighbors have commercial chicken houses. What do I know about smells?

Nope, I get zero odor until I open the lid. Never anything during cutting.

Even with the Pro unit, which surprised the heck out of me. If anything it has less smell than the PRU did. Flap open with wood in it and all. I can cut leather and not be bothered until after. (Did that last night.)

Getting the vent path sealed took a lot longer than ten minutes to install though. We’ve got everything in the QC and acrylic panel caulked with silicone, and you have to get the hose twisted far enough into the QC that there aren’t any leaks around it. And we use a very carefully tightened worm clamp, not those spring things. (Also a very short run on the hose - maybe that makes a difference.)

Don’t know, but since my husband is every bit as sensitive to smells as Chris is, and he has never complained of smelling anything at all once we got it installed, it really doesn’t have any smells coming out of it. (He gets sick on elevators if some lady (or guy) got a little too heavy with the perfume. I do too for that matter, but he’s got a bloodhound nose.)