I’m working on some earrings with overlapping shapes and have used illustrator’s pathfinder in various ways to combine them (draw shapes/paths | object > expand | pathfinder > unite) and then changing their fills to strokes. When I upload the svgs into the gfui, it wants to engrave them; when I convert it to cut, it basically burns the whole piece away and does multiple passes as if the original shapes were there. I did a cursory search of the forum, but haven’t found anything that’s helped. I can’t figure out how to include the svgs here, I’ll include an ai file circle_earrings.ai (1.6 MB)
.

I don’t know exactly why (I haven’t delved into the SVG code to see what it does), but you need to change your design from “Align Stroke to Outside” to “Align Stroke from Center.” 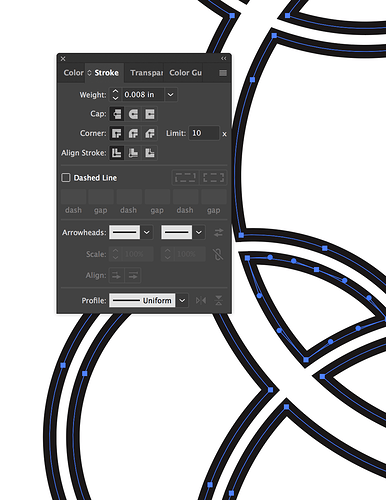 All of those shapes have a stroke on the inside. Every time I have that, it does exactly what you are describing. (Window>stroke is how you get the window to check. You will be looking at align stroke)

Select the whole pattern, then select the center line to align. It will look like some are filled, but they aren’t, you just have thick stroke lines. You can reduce them, or go to view>outline to see just the stroke.

See if that works. My GF is orange buttoned right now, so I can’t run it to try.

Edit
JB was a bit faster than me…

Thanks so much! This was it! Now I just have to make them bigger, haha. Love this community!

Thank you! So sorry to hear about your orange button! I Hope it’s resolved soon.

FWIW, I don’t think that SVG has a stroke inside/outside/center specification.

When you save your SVG with the stroke aligned to the inside or outside, you actually seem to lose any of the style paramaters:

When I saved it how OP had it (align to outside):

I’m not going to trace down all of those coordinates to see what it’s making, but it looks like since it removes both stroke and fill, it’s just defaulting to engraving.

In the absence of knowing what the exact kerf is for a material (and the testing to get that figure), I like to use a stroke of .008" which gives a good visual idea of what the laser path is going to look like.

That’s really helpful to know. I’m using PG maple plywood; I’m hoping to insert some PG walnut plywood into some of the sections (I’ve got them in a separate file), think that stroke size would work? (Hope I’m not asking too many questions; I know there are kerf posts out there, and I plan to read them).

I haven’t done much with the inlays. The stroke size won’t change the size, profile, etc of the cut. It just helps to visualize where the beam will travel when you have stuff very close together.

FWIW, I don’t think that SVG has a stroke inside/outside/center specification.

No, the current version of SVG doesn’t have this yet. It also won’t make it into SVG2, as it’s not been decided how it should work in all cases. They’re still working on it, but it won’t be added until sometime after SVG2 is finalized (so not anytime soon.) See the discussion of stroke-alignment here for some of the more pressing issues to be decided.

So for now different programs handle stroke alignment in different ways when exporting to SVG. Some just ignore it (so you end up with center-aligned strokes in SVG exports) whereas others try to fake it in various ways. (If I remember correctly Affinity Designer will basically do an “expand stroke” operation on the stroke and export a filled shape approximating the stroke instead, which works great for web or print work but goes spectacularly wrong for cutting/scoring on the Glowforge.)

Thank you for your help @jbmanning5 and @curt!