Continuing the discussion from Living Hinges: An exploration in acrylic and plywood:

While I haven’t given up on the acrylic, I thought I would at least post the finished product of my living hinge investigations. I’m very pleased that the design I envisioned and the way I would use the Glowforge worked out great. Just one tool! 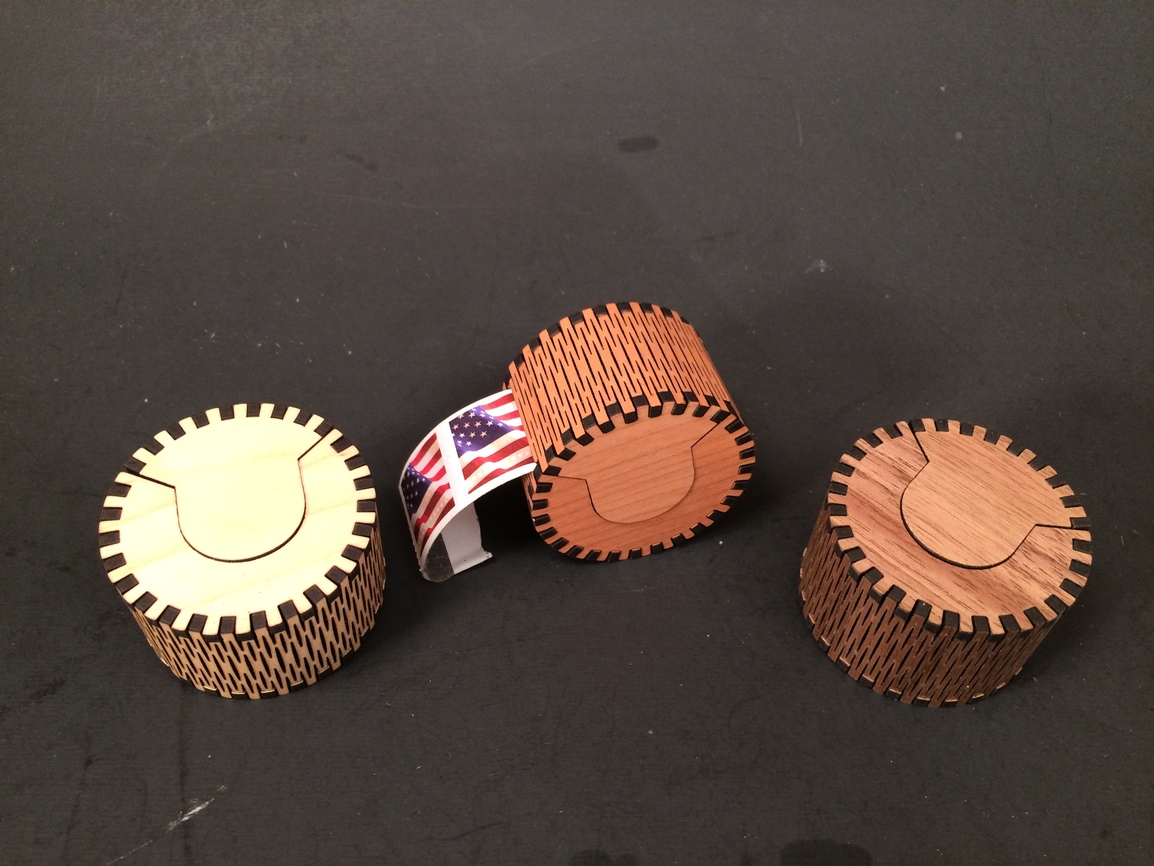 The initial design of the living hinge section was creating weak spots and I couldn’t wrap the plywood without it snapping. Looking at @PrintToLaser’s Door Bell I noted something about the hinge that helped me understand better what was going on. 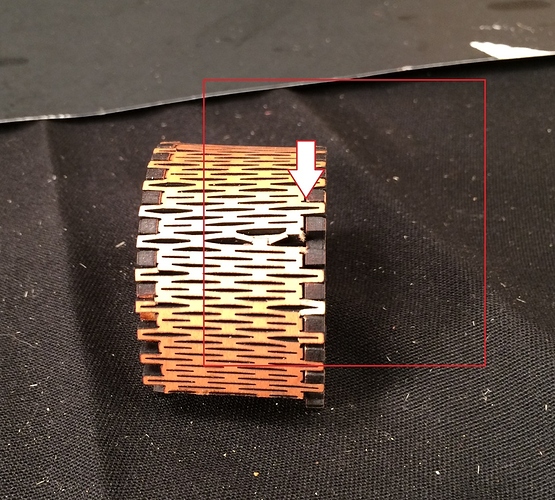 The horizontal tabs were short stubs that ended just right after the edge. Also there was a through slot that went into the circumferential tab. This made the tab weak and with no real possibility of flex. 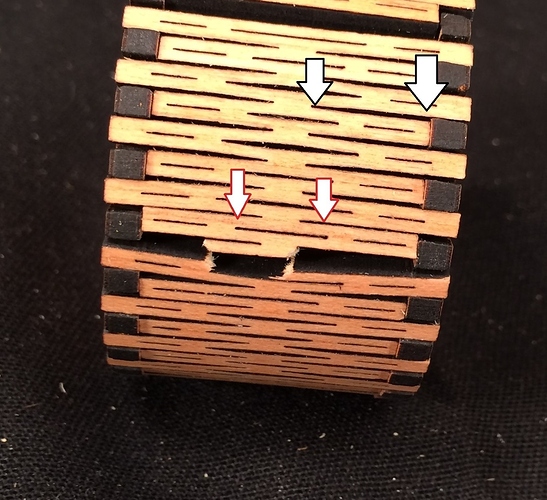 So I lengthened the slots on either side of the outer tabs (black outlined arrows) and moved the end of the slot to just flush with the inner edge. That gave the tab some leeway to stretch around the circle.

That still left a problem. The center section was a little weak. the space between the slots were too even and allowed for a weak spot in the center. (Red outlined arrows.)

So I lengthened the center slot into two cuts and and made the tab edges three cuts to get a spread of the gaps more even. 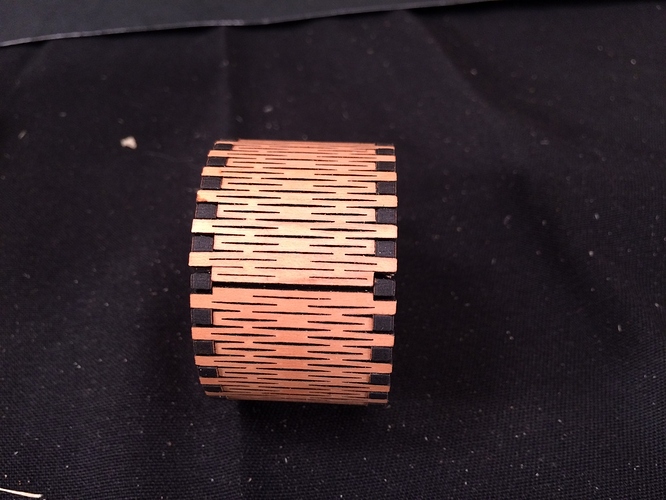 Yay! I made it all the way around without breaking the hinge on both the top and the bottom pieces.

That left getting the engrave and tab slot for the top to slide into the bottom. Just needed to tweak the outlines and the fill to ensure a tight fit. 3 passes with 25% power at 340 leaves a depth of 1/2 the thickness of the plywood. 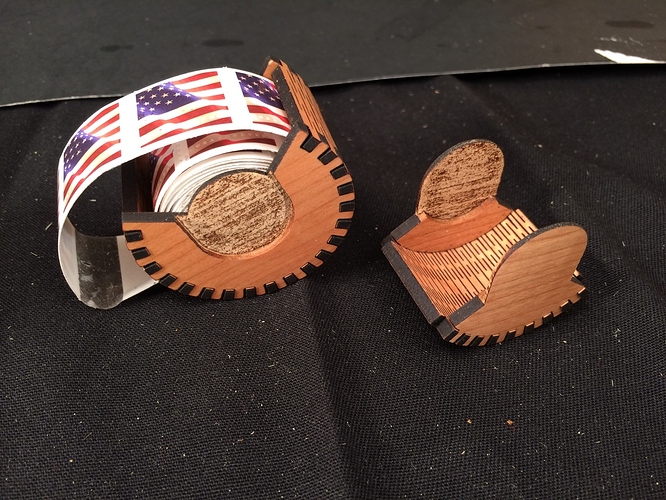 So the tabs slip together and remain even and flush (well, pretty close!) 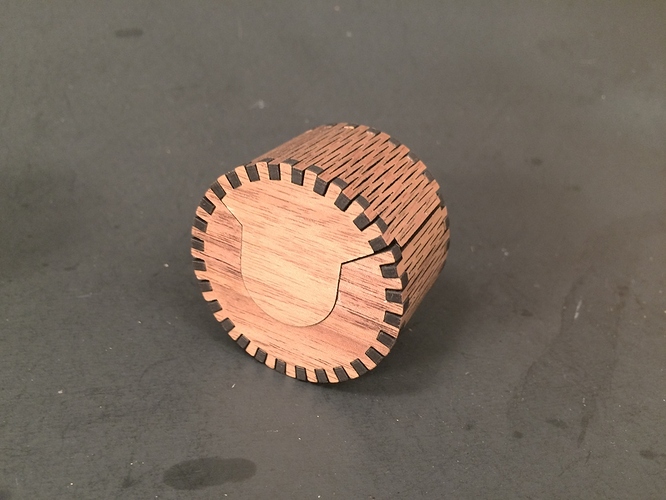 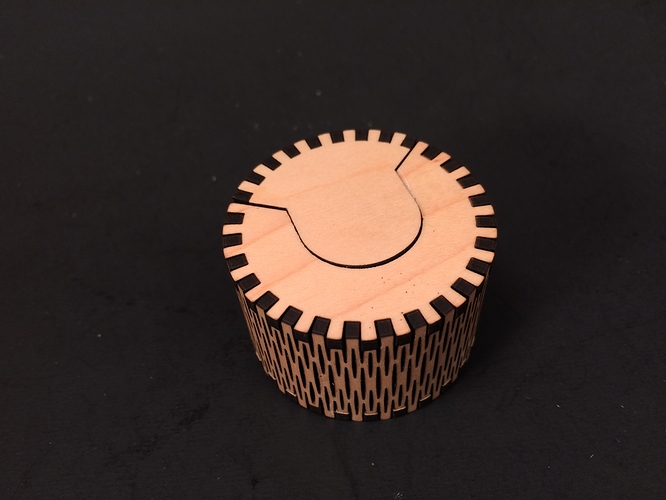 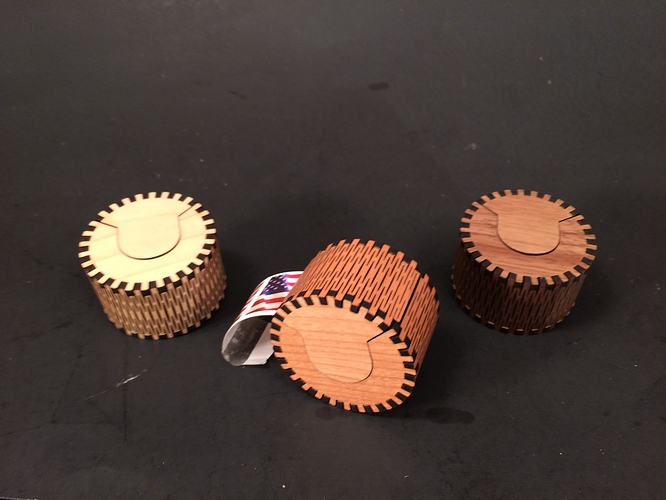 Here is the SVG from Inkscape. I hope it works for you. The scaling issue can be tricky since I used the elliptical box maker.

Thought I would turn this loose on the forum in gratitude for all the assistance I have gotten through the past year and a half from so many.

Version uploaded: 5/7/2017 8:40 PM CST with latest tweaks. On thing to note as explained in a later post, the design as it stands does not work for all USPS roll stamps. I brought a box in to give to my secretary today and when I put the roll in, it stuck! Less than a 1/2mm difference but I designed the box for one roll of stamps that I had, not knowing at all that there is a different width of stamp rolls, albeit only very slight!. Will fix the design to accommodate the larger roll.

Edit: SVG changed so that living hinge cuts go with the grain. Forgot that this is is the way you should orient them for maximum flex and strength.

Another Edit: Added two small squares that can be cut and engraved at the settings I suggest for a test piece before you commit to do the box. It would be worth it to check out how your pre-release or eventual production works. Once the they are printed, they should slide together with engrave sides face to face and have a smooth transition on the sides.

Assembly can be tricky. Try to do both sides of the larger one at the same time, tab by tab, alternating sides Put the top of the cut to the inside. This allows for compression. The narrow cut from the bottom of the cut will expand. The top pieces and bottom pieces aren’t interchangeable. It goes together one way. I haven’t made the design so that is obvious, but put the side bottom pieces with the engrave out, and the top side pieces with the engraving in. That will orient it corretly. Then once top and bottom are done, you’ll see how it fits together (I hope!)

I say one tool, but it does help to have an exactly knife or something to clean up the engraving char a little, especially on the sides of the engrave where soot can build up. It can interfere with the fit.

124 Likes
Glowforgey World in the Winter
Question on settings for 3D engraving
Weekly Highlights for the Week Ending May 6th, 2017
Round box...what box generator does this
A top hat for your business cards
Just-Maken-It May 1, 2017, 8:12pm #2

Great project! Thank you for sharing your leanings with all of us.

What? No inlay? Just kidding! It looks great! You put a tremendous amount of work into it and its beautiful!
No svg link… Just to let you know.

Thanks. Forgot to embiggen the SVG from 8x8!

Thanks for those photos, and the extra thoughts on slot distribution.
Curiously, while I was looking at them, they all suddenly disappeared

Absolutely no idea what happened . Never had that happen before, and " I didn’t touch it, honest Guv, it just vanished."

Aaaagh ! Now they’re back.
I think I need to lie down.

When I was fixing the SVG.

Well that’s a relief then.
But I still think I need to lie down, or possibly a drink.
Cheers

Last night I was all set: new bottle of Laphroig and a churchhill Onyx maduro. Had just a few laser things and then I’d relax to a movie. Ahh.

Right now I’m going back upstairs for some herbal tea and some rest and catch up on the forum. I’ve got six days ago to catch up, but five days and after, I’m good.

This is a fantastic project and a really nice example of continued and committed problem solving!

I have a specific memory of a similar stamp roll at my grandparents apartment when I was a child. It involves unrolling the entire thing on the floor and then struggling (successfully) to figure out how to open it and get the stamps back in before I was found out…

Thank you for overcoming all the obstacles and giving us a really cool design! I will definitely be making one of these.

cool idea! Thanks for sharing all the hitches, downsides, and lessons with us!

Thanks @marmak3261 for all the write ups, you guys are going to save all the rest of us so many headaches and a lot of cash and time.
One day soon the rest of us will be sacrificing materials to the laser.

Thank you for overcoming all the obstacles and giving us a really cool design! I will definitely be making one of these.

That was a good, clear walkthrough off the issues you were seeing and how you addressed them. Nice! Great pictures to illustrate as well.
Thanks very much for the post!

Thanks for sharing this project and for all the effort that went into perfecting it! I showed my wife your first version and she said I would definitely need to make one for our use.

This may be considered heresy, but would soaking the hinge help reduce the risk of breaking?

Aaaaaaaand, here is your first print from a Glowforge other than yours: 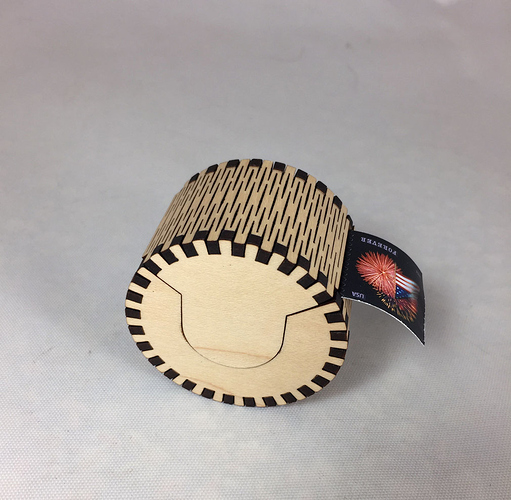 Isn’t it lovely? Made from 1/8" Proofgrade maple plywood.

I decided to only go for two passes on the engrave. When I ran the test boxes per your suggestion, they engraved a bit over halfway (more like 2/3) and would have left the piece too thin in that area. Perhaps because of this, the mating pieces for the sides were too big (not enough material removed by kerf) and would not fit together, so I went in with my Foredom tool and sanded just a little until they fit. Also ground down the extra engrave since I only did 2 passes.

It was fun to put it together! Boy, is that plywood strong. I kept thinking I was going to snap off a tab but they all clicked in place very nicely.

In gratitude, I’m going to upload my leather earrings file (in a separate post).

soaking the hinge help reduce the risk of breaking?

The inner core is like very fine MDF. I wouldn’t want to wet it because while it would loosen the wood, it would weaken the core. I’ve tweaked the hinges so that I have been able to do a complete hinge without breaking it five times in a row. You do have to be ginger with it, but it’s surprisingly resilient.

here is your first print from a Glowforge other than yours

Now that makes me happy! I thought, “Hey, I don’t remember having those fireworks stamps!” and then it hit me.

Cool. The engraving is a challenge to tweak just right. I almost always use a razor knife to clean up the engrave a little bit. The edges are tough to work out because of the wall/side the engrave leaves in the bottom section. I clean out the soot and then bevel the top engrave to make the mating more exact. The cut line is dead on, but as you said, the way the engraving works, it needs a little tweaking.

I think the flex on those hinges comes from having really long cut lines across it middle. I bet if you only had one division across the width instead of 2 then it would flex really easily. Also you need to make the gaps between the slits smaller too.

Here is one of my boxes, I know it’s much wider but this hinge has a lot of flex 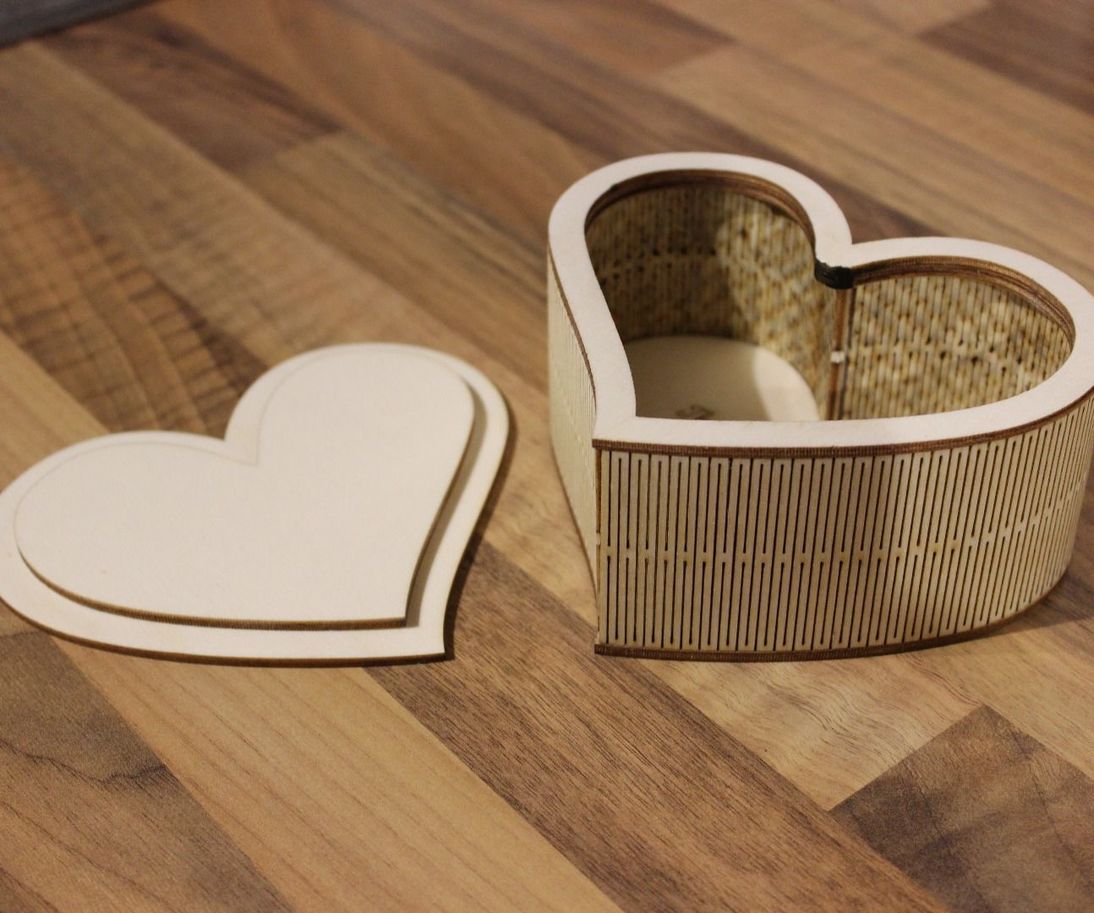 I love the look of the hinge with the long slots. I did this kind of with the version above with the arrows. This worked ok really but then it was too loose and didn’t snap fit at the end and hold on without any glue. That was part of the equation but I didn’t mention that issue in the description. But your work has definitely inspired me more than anything. I look forward to the day when so many more get a Glowforge and we can have our fist 30 day challenge of printing a new design a day and see what folks come up with.