My wife found this paddle at Hobby Lobby for $5 and some change (after coupon). I decided to have some fun with the Punisher logo. Maybe we’ll hit up some of our teacher friends and see if they’d be interested. LOL 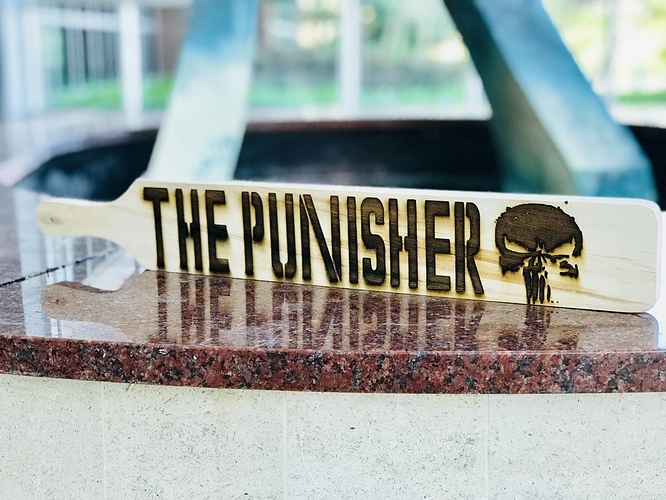 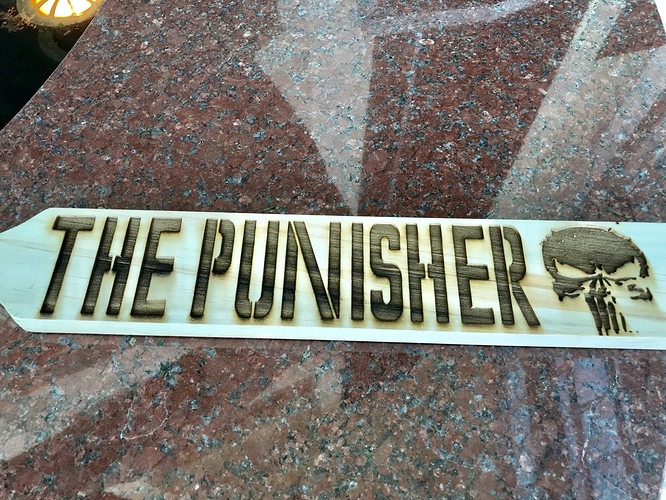 Our HS principal still had (and used!) a paddle like this when I graduated back in '78. (Small-town Texas was slow to conform to the move away from corporal punishment). His was longer and thicker, and had 1/2" diameter holes drilled in it to reduce wind resistance.

I never had to experience it, but some of the guys in my class were well-acquainted with it, and took pride in comparing how many “lickings” they’d had. (Tradition was that after it was used on you, you got to sign it. Because THAT was going to make rebel kids want to mend their ways, right?

Our gym teacher had a paddle, if you really want it to work, you drill large holes in the paddle to reduce wind resistance. The paddle moves faster and hits your a** a lot harder!

Also, the pattern of red marks on a person’s behind is a lot more artistic with the holes in the paddle. Kids were bare bottomed when paddled.

Ah, the ‘good ole days’! I can still remember the crack of the paddle sound echoing thru the locker room!

I don’t remember the whole paddling thing fondly. But that one is very cool!

Our principal had one made out of a baseball bat. The round handle and grip were the same, but then above the handle it had been cut flat and sanded (to maybe 3/4 or 1 inch thick), with about 20 or so holes drilled through. He was a big league ball player out of college recruited by the Royals, so he could really swing that thing!

Sheesh. Where did you people grow up?

. Where did you people grow up?

Rural Tennessee…I can attest to the efficiency of a paddle with holes… it does make you want to change your ways. (Or work twice as hard to not get caught! ) Or so I’ve read… Yeah that’s it.

Where did you people grow up?

Rural Texas. Well, I didn’t grow up there, just landed there my senior year after my dad retired from the AF. My previous schools (in different states / bigger towns and cities) had long since abandoned corporal punishment!

Where did you people grow up?

Anywhere in the 50’s and 60’s. Kids back then said Yes Sir for a reason.
Political Correctness had not been born yet and things that got the desired results were the norm.
Different times. Not necessarily better nor worse. But truly different times.

Oh, no, the bases were pre-retirement. The rural Texas school was after he retired.

The only Texas base we ever lived on was in Waco, and that one’s been gone for decades, although you can still spot the housing when you drive through, if you’re a military brat.

We moved to Somerville, Texas from Albuquerque when my dad retired in '77, and that’s when I discovered kids still got paddled by teachers and principals in some places. And a lot of other stuff, too, that my world-wandering hadn’t fully prepared me for!

I’d forgotten about Connally, which reminded me about Webb in Big Spring that closed in the late 70s.

Graduated in SW Oklahoma, with 23 in my senior class.

Detroit area, early 70s. “Corporal punishment” with a variety of wooden paddles was common, usually administered by the vice-principal or the shop teacher/football coach.

while it was an AFB, the idea of it being an “air” base was a bit of a misnomer. biggest thing flying in and out of there in the 80s when i went to school there a couple of times were cessna 152s. it was purely a military intelligence training base for SIGINT people in all services.

Oh yeah. I lived a stone throw from the original north gate. No real planes since the B25 training, although they did get clearance to land a couple of transports for their fire training school.

Corporal punishment survived in the school district in San Antonio that I grew up in until the early '80’s. Not being a trouble maker, I only found myself in the vice principal’s office once, and I took the licks. It hurt, but was not as bad as the punishment I would have gotten at home.

As the man said, different times.

Corporal punishment survived in the school district in San Antonio that I grew up in until the early '80’s.

I grew up in the late 60s/70s in CT. No corporal punishment allowed in the schools. That was your dad’s job and even that had disappeared by the late 70s.

When my oldest son was slacking off in 7th grade we told him he’d have to go to summer school if he didn’t straighten up and get high honors by the end if the year. He missed by a tenth of a point. He went to summer school. Our friends thought we were being incredibly hard. He never missed again - that summer he was 12 yrs old attending math class with 18 yr olds who needed the credit to graduate high school. He was appalled. Never had an issue with him after that.