I made three jigsaw puzzles as a birthday gift. I combined what I learned from these posts by @jbmanning5, the resident puzzle master/professional (he has many posts, I should have used more):

Cont. I'm Puzzled - Chipboard and Photo Paper Beyond the Manual

Extending the discussion from: I picked up some all-purpose chipboard from Dick Blick (http://www.dickblick.com/products/all-purpose-chipboard/). This isn’t archival quality but it will do really good for testing. (Related: I’d really like Eska Board, but it’s impossible to find and their USA Sales doesn’t seem to reply… ) I ordered enough of the .10" and .05" to meet the $35 minimum for free shipping. Seventeen sheets total of 28x44" chipboard, weighing 40 lbs - shipped for free. They must h…

Chipboard and Puzzles. And varnish. Continued, Again Beyond the Manual

What a process to nail down the perfect settings for a Non-Proofgrade application. I haven’t used a lot of Proofgrade (yet) but it makes one realize the value of “click and go”. Part of what complicates the process is that I’m working with multiple substrates that are adhered together, where smoke and char just won’t work for the end product, and that I’m cheap. I don’t want to mask these if I can avoid doing so - one, because it’s an additional expense to production, and two, it’s many extra st…

Toasted Chipboard - help needed with settings! Beyond the Manual

I’ve done hundreds of tests on chipboard and I don’t think you’ll be able to cut without some charring, since it’s basically several plies of paper. I’ve found that cutting at power 100 and making multiple passes creates less char and a tighter kerf. For example, the chipboard I use is .08” and then .09” with the 10 mil photo paper. It will cut at 180/Full (on a pro) but it chars more and leaves a bigger kerf. If I do 2 passes at 260/100, it takes the same amount of time but a smaller kerf and l…

And I generated the puzzle from @Draradech’s puzzle generator.

Then I bought some Epson semi-gloss photo paper. I bought my mother an Epson XP600 printer several years ago, it is a good printer, and printed out my photos on 8.5" x 11" paper. I was happy with the quality of the print; as for the quality of the compositions, that can’t be blamed on the printer. The photos sized to 11" x 8.25", so there was a very slim unprinted stripe on the left and right-hand sides. I mounted the photos to my chipboard using 3M (Scotch brand) photo mount adhesive spray.

Before I mounted the actual photos, I mounted a blank piece of photo paper so I could dial in my settings. After I mounted the paper, I sprayed it with two coats of 3x spray polyurethane I bought at Menards (a Midwest home improvement DIY chain.) Having a prototype of what I would laser-cut, I “dialed in” my settings. One good thing I learned from making the prototype is you need a jig to mount the paper to the chipboard. At least I do. A cardboard box worked for me: 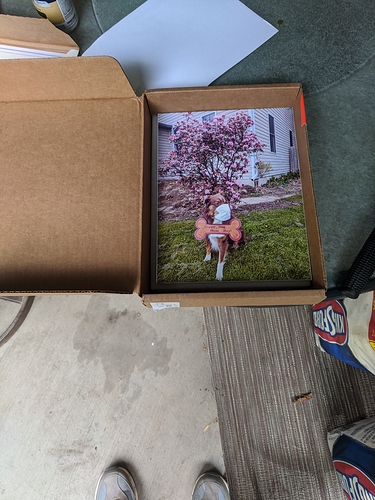 jig3036×4048 3.79 MB
Notice the white stripes on the side and I used some gorilla tape to square up the top corner. Ignore the shoes, please

Just gently jam the chipboard into a mostly square corner and then use that corner to align your photo. It takes me about three tries. Once I had the paper pretty much square on the backer I used a veneer roller to press the paper onto the chipboard. You could use a squeegee or anything that applies pressure without ruining the photo. Next, I sprayed a coat of the 3x polyurethane on it. 2 hours later a second coat.

I made the puzzle so it was slightly smaller than the 8.25" x 11" picture. I placed the puzzle made by the puzzle generator inside a 8.5" x 11" rectangle (done in Inkscape.) Measure your chipboard, as it probably isn’t exactly 8.5" x 11", and adjust the rectangle accordingly. Cut out the rectangle first from cardboard, place your photo-chipboard combo inside your jig and then cut out the jigsaw puzzle. 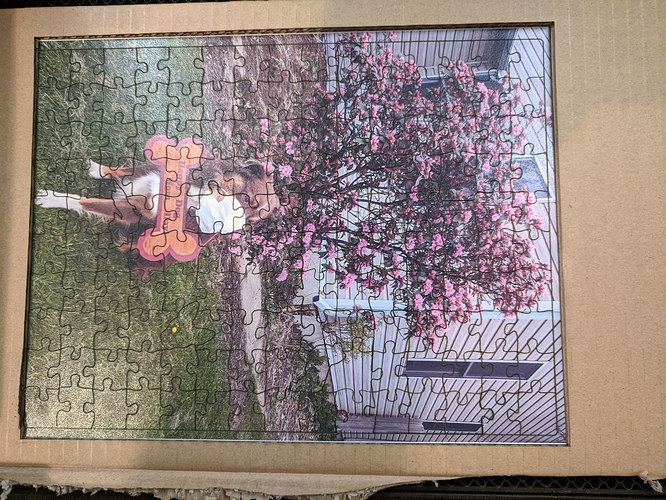 Next, wipe the top of the photo with a barely damp, slightly moist, not at all wet, cloth. The top is protected by some polyurethane, but it is not water proof. You may not see it, but you will see the smoke/grime on your cloth. Do this.

I had a brilliant idea. I’ll use a pizza peel to transfer the puzzle from the glowforge to a counter where I can take it apart. 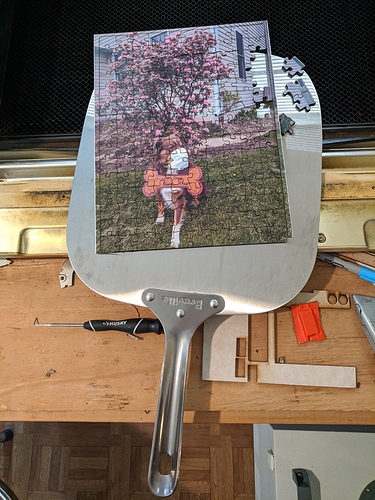 This is when I learned that my “dialed-in” settings of 210/Full (Pro) weren’t exactly perfect. I had experimented with only four puzzle pieces. When you dial-in settings for a kiss-cut, you have to make sure your material is absolutely flat on the bed. You can’t use magnets in the middle of a jigsaw puzzle, and holding down the edges only helps the edges. So the settings for my first full-size puzzle were perfect for about 70% of the puzzle. It wasn’t salvageable. On the next two puzzles I used 195/Full (Pro) and that worked great. The backside had very little flashback. I will add, that as jbmanning advised, you will not get 100% clean cuts. There will be tiny places on the backside that are not cut through and you need to use a small exacto knife or just tear the bottom of the chipboard a little. You can do this without wrecking the puzzle when you cut picture side up.

As anyone who has cut cardboard knows, the edges char. So 1.5 cups of kosher salt in a plastic container and a full minute of shaking. It needs to be a full minute: time it. In addition to removing char any sticky residue your barely damp cloth didn’t remove will be removed by the salt. 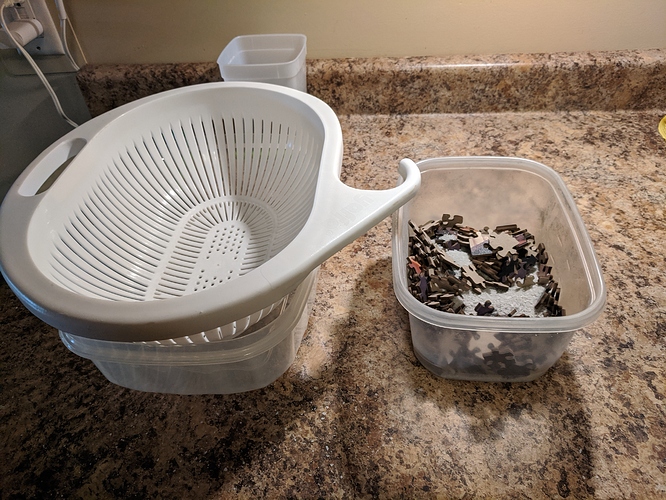 After a minute the edges of the pieces will be discolored, but if you scrape the edge across your hand it doesn’t mark you (at least not my pasty white skin, different skin tones may need a white towel or something) so you know the pieces are clean. I then used a colander to separate the puzzle pieces from the salt. The 1.5c of kosher salt worked fine for two 150-piece puzzles.

I redid the puzzle I wrecked with the wrong settings and set about making a box for the puzzles. Not in the mood to make three boxes, I figured if you like puzzles you will love having the pieces for three puzzles all mixed up. Right? So I made a double-walled box with a twist top. 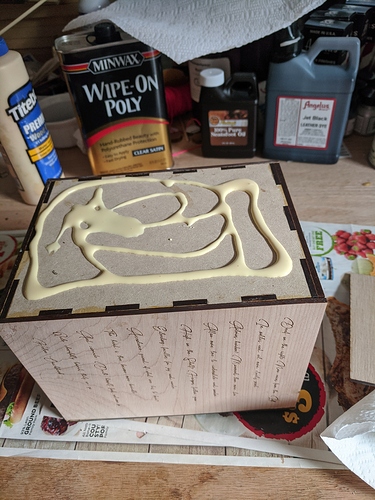 Having two layers on the top, I can make an opening for a circular top that can be twisted closed. The last thing I wanted was the recipient to drop the box with a gravity-only lid and have all the pieces go flying out. This style of lid doesn’t technically lock, but it will not pop off and doesn’t require hardware. Here is an image for the top and bottom layer on the top of the box:

And pictures of the bottom and top of the glued together twist-lid.

I used a wipe-on poly for the outside of the box and the top of the twist-lid. An advantage of having a hole in the top is you can poly the entire outside and then hang it to dry. 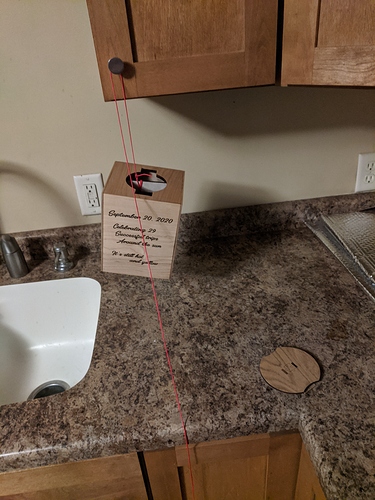 And the box with the puzzles inside. I measured, calculated the volume of the pieces, and still considerably over-sized the box. 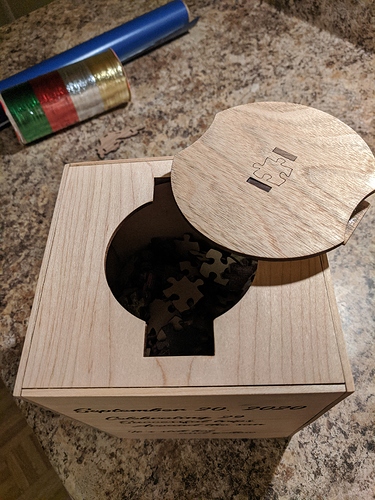 I had a brilliant idea. I’ll use a pizza peel to transfer the puzzle from the glowforge to a counter where I can take it apart.

One thing you can do here is drop down the front door and put your pizza peel, or a bigger piece of chipboard, or whatever (I just used big baking tins for a while, and then/now big Tupperware), against the front of the crumbtray and just slide the puzzle forward. With the Tupperware, I go from a big Tupperware and it breaks up some going on, and then pour into a smaller piece of Tupperware, and shake it up, to separate all the pieces (since I’m just barellllly cutting through)

I did drop down the front door. But at least one piece would either snag on the crumb tray or snag on the pizza peel. It was better than picking them up individually, but it wasn’t like sliding a pizza out of an oven.

With the Tupperware, I go from a big Tupperware and it breaks up some going on, and then pour into a smaller piece of Tupperware, and shake it up, to separate all the pieces (since I’m just barellllly cutting through)

Knowing this would have come in handy.

I use a cereal saver bin that I toss the salt and pieces in, then shake aggressively. Use the strainer to sift the salt out from the pieces.

Thanks for sharing your experience and knowledge. If making puzzles was easy, we would all be doing it. Your post reminded me that I want pizza.

I made the post to explain it is easy. Essentially it is print a photo, spray it with glue, press it onto a piece of chipboard, spray it with polyurethane, cut it and then shake it with some salt. 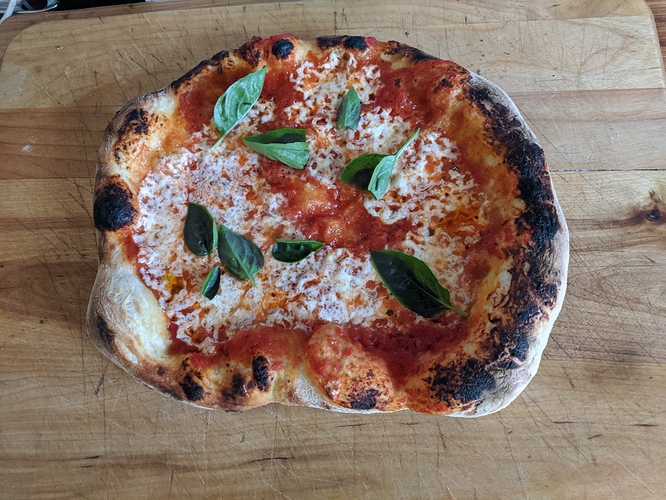 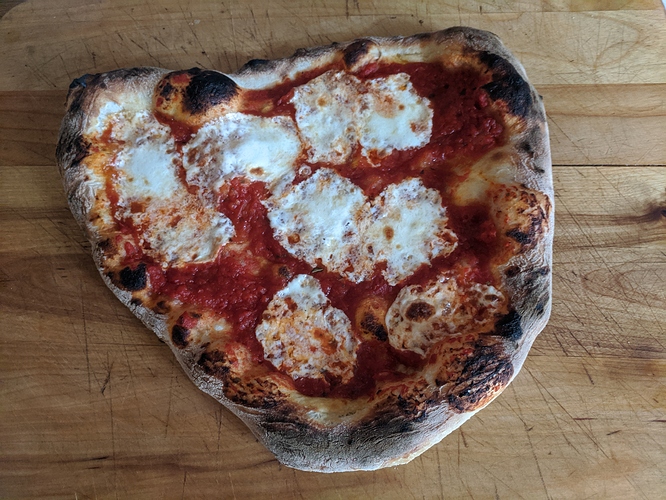 I thought I had one of a pan pizza. If I remember, I’ll update the post after dinner tonight. 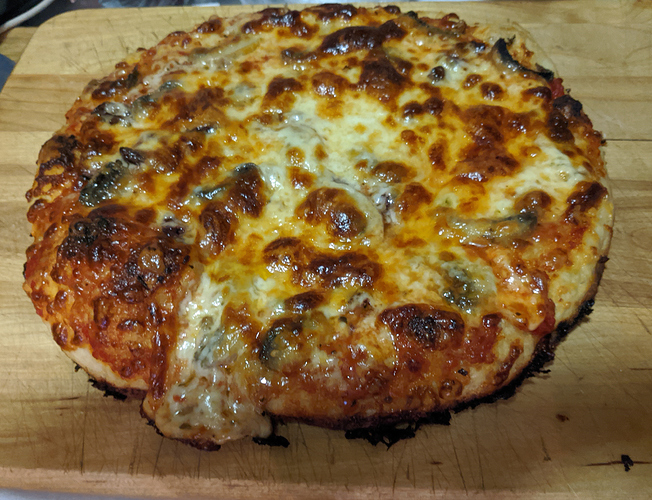 As in, I use a sheet of masking tape that has been used a couple of times to make it not so sticky and/or stuck on my shirt and peeled off to get the right amount of cat fur on it to make getting the puzzle pieces off easy.

Thanks for taking the time to add your puzzle write-up! And the pizza pics are just cruel

You can make a puzzle out of that pizza photo!
Liked hearing about your process.