In the videos I’ve seen with Glowforge when the laser is doing what it does best. I noticed the print head has kind of a randomness to where it’s burning the object, a little bit here, then moves to the other side and does a little bit more, etc.
Is there reasoning behind the slicer making such large head movements around the object to cut a few pieces and move to another area, rather than progressively completing an area? Is it based on how the object was drawn in Core or Illustrator. kind of like how an artist will paint or sketch?

I"m relatively new to 3D printing and my 3D printer does the same thing while printing the same layer, even when you enable the optimize/reduce head movement.

The app for controlling the head will choose its own order unless specified by the user.

During an engraving step, the laser starts at a spot and moves up step by step in a uniform fill pattern.

So although it looks like it’s bouncing all over the place, it’s actually optimizing the non-burn travel time.

And yes, it does take into consideration things like how the file was created (joined longer paths versus little choppy ones), and which operations the user set up to be performed first.

In my cam software(meshCAM for CNC) the are a couple options for optimizing,
1st is what ever order it was drawn in,
the second is “Shortest Distance” this is a little misleading because it doesn’t alway produce the quickest toolpath, what it does is once it is done with a cut it looks for the next closes start point. what happens is if there are a lot of cutouts its good at the start but then near the end its zooming all around.
The last is Zig Zag, this looks for the next closes cut in the X+ direction until it gets to the end then looks for the closest X- cut. this seems to give me the shortest machine time if I have a lot of nested parts.

Second or the third. (It looks more like what you are calling the Zig-Zag option to me.)

That hedgie file has paths that put it all over the place, but it did them very quickly.

The phenomenon you’re noticing is one common to basically all machines (and all systems) that need to move to several locations. It’s very processor-intensive to calculate the shortest path that passes through many locations. This is called the “Traveling Salesman Problem” and here’s a comment Dan made a long time ago that I found amusing…

We were originally planning to do a lot of work on order-of-operations but it turns out it makes a fairly small difference in the total print time. We’ll get to it eventually but right now we’re fond of saying, “Go home, traveling salesman, you’re drunk.” The travelling salesman problem (TSP) asks the following question: "Given a list of cities and the distances between each pair of cities, what is the shortest possible route that visits each city and returns to the origin city?" It is an NP-hard problem in combinatorial optimization, important in operations research and theoretical computer science. The travelling purchaser problem and the vehicle routing problem are both generalizations of TSP. In the theory of computational complexity, the deci...

Ants are quite good at solving it I have heard.

So that leads me to conclude that perhaps the cutting instructions are just performed in whatever order they happen to be in the original vector file? (Unless purposely reordered by the operator.)

Apparently bees get pretty close too.

There’s a simple algorithm to optimize the path. But yeah, the traveling salesforge problem is not one at the top of our priority list right now.

How is the software at handling lines that touch but are technically not connected (eg. a closed triangle made of three individual, disjoined lines) these days? I remember there was a time (the trebuchet?) when disconnected lines made the machine bounce around quite a bit.

Thanks everyone! My head is spinning at the quick responses.
My OCD will have to remember this when in Corel Draw. Otherwise I’ll have to catch up with the drunk traveling salesman.

August is not coming soon enough for my Glowforge Pro. I’m stockpiling art and materials in anticipation.

Designed a human services call center for transportation (ADA, Medicaid, Veterans, etc.) once. Every evening the call center would run the next day’s appointments and destinations through a piece of software called a scheduling engine to find the most effective routes for each paratransit vehicle based on several parameters (time, length of trip, location of origins and destinations, etc.) with each parameter waited differently. it would run about 1000 permutations to find the optimal routes for the vehicles, then that output would go to human schedulers for the last tweaking. many of the routes would resemble your traveling salesman diagram…

During a scoring or cutting step, I’ve noticed that it starts at the point closest to the place where the last operation ended, and it follows the path that it started on. When that one ends, it starts a new path close to where it ended

Is that the path as you see it or that path as the design software made it?

For instance (@Hirudin mentions it below), you can design something that looks to you as if it’s a single path from a logical perspective but in reality is composed of multiple paths to the design tool. The triangle of 3 connected but separate lines is an easy example. It looks like one object but it’s really 3 different paths. (You can fix that in the design software by joining the paths but that can be tedious.)

The same splitting of a visible path into multiple computer paths happens with complex curves and other drawing objects (or even text converted to paths). On my lasers they’ll jump around treating different segments as different paths and thus not run a continuous score or cut at times.

In my furniture delivery work, the freight came into several different warehouses, and delivered to homes scattered across the Denver and extended metro area (Evergreen, Boulder, Longmont, Parker).
The route to the homes dictated which order they had to be loaded onto the truck. I used to spend a good portion of the day’s evening setting up the route for the next day, always a new challenge.
How well I laid the schedule could make or break the day’s profit. Traveling salesman problem every day.

@palmercr slime mold would do it as well. Old world cities had paths from the wilderness that led to town center, which became the roads. You can tell them at a glance form the air because of the radial nature of the roads.

On 3D printers, some of the software (ostensibly) also breaks up area fills so as not to put too much heat in one place at a time (if you make too big a chunk of hot plastic at once it won’t cool evenly, or at all, and Bad Things can happen). I wonder if there’s an analogous criterion for the GF perhaps for deeply engraved areas or for cuts/scores really close to each other.

Is that the path as you see it or that path as the design software made it?

It’s the paths as I designed them in the software.

On this one for instance, there were rather a lot of disconnected paths, because that’s what the design called for.

The path filling by the GF followed the arrow, as I recall. (Wasn’t watching it that closely.) Then it went back and filled in the little bits at the ends. It was efficient. 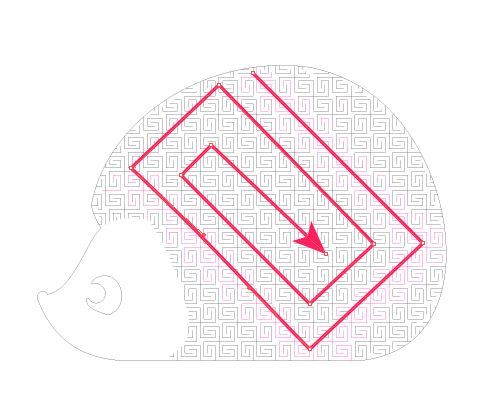 How is the software at handling lines that touch but are technically not connected (eg. a closed triangle made of three individual, disjoined lines) these days?

It’s not necessary to join lines before sending a file to the GF. (According to the manual.)

I’ll eventually test a disjointed file, I’ve got a butterfly that I imported from F360 that has a lot of unjoined shapes. (I’ve been saving it for that test.)

So do you fellas want to watch one? Just printed a few that have an inordinate amount of individual cuts.

I love that it previews the path first. How fun