I’ve been working “Four” pretty hard, because I only have like two days left on my warranty and I want to make sure I’ve got a good machine going forward. Two things have surfaced so far.

One: the bed image is rotated. It makes it really weird trying to line things up. The cuts come out straight (as in, parallel to the edge, even though on the screen it looks like they won’t be), but figuring out where to place things is really difficult, because the edges of the image and the cutting / engraving boundaries aren’t parallel, so I never really know where things are going to land. I can deal with the image not being aligned with exactly where it’s going to end up on the material, but having it not aligned AND rotated is hurting my brain.

This isn’t PG material, but it shows the problem better because it’s a larger cut, so it’s easier to see the rotation between the design and the actual outcome: 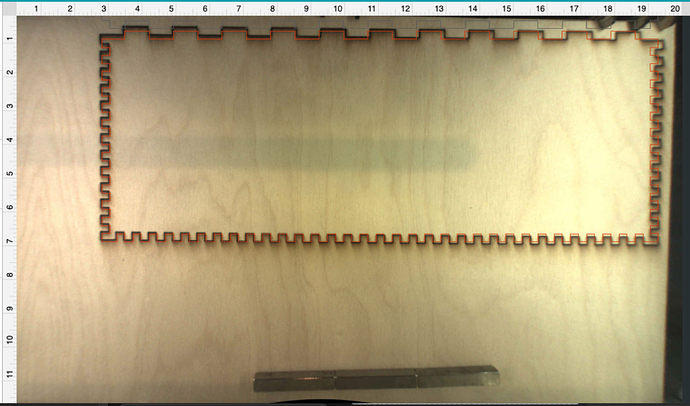 And here’s the requisite GOGM on medium draftboard, which shows the same thing but you have to look a lot closer to see it:

The second issue happened tonight when this scored pattern went wonky: I’m pretty sure the issue isn’t in the artwork, since the pattern on the left was copied and mirrored from the one on the right. (This job was in process at 5:30 pm Pacific today.) 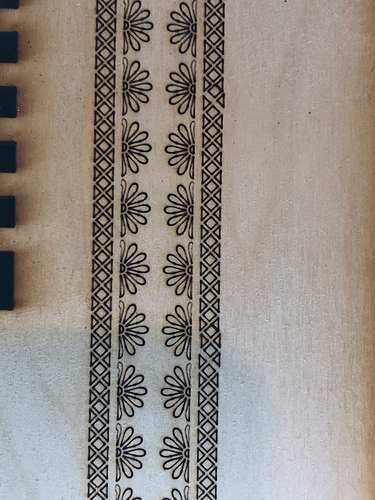 The misalignment happened at unequal intervals down the whole length of the design. The cuts were all okay; only the scores (which were done in the first step) were messed up. 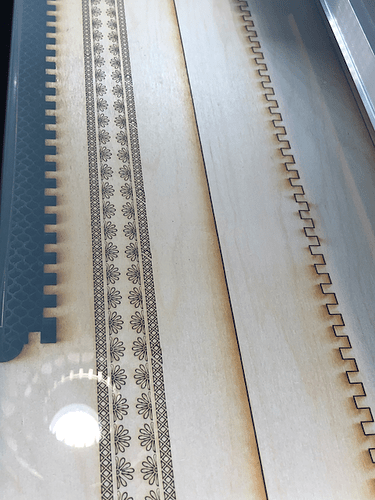 I’ve checked all the belts and tracks and there’s no debris, and everything moves freely and easily, so I’m kind of stumped as to what might have happened!

Is the design made up of parts with those diagonals?
I have seen inkscape get wonky with a mirrored design, measuring differently somehow between the mirrored and un mirrored directions operating off the bottom left corner rather than centers.

That is a puzzle. My guess is the issue lies with image processing rather than being machine specific. It will be interesting to see if support can nail it. Too bad, but still a pretty design.

I can’t remember for certain at this point, but I think I mirrored the lower (left) one from the upper (right) one, which would mean the original is the one that went wonky.

Yeah, I’m just concerned because my warranty is technically up (today, I think). It’s my fourth, and I’ve only had it for like 2 weeks, so I’m a little antsy about it being solid! The rotated image is really a pain, and I haven’t seen any specs on that. It’s just inside the 1/4" alignment requirement, but I don’t know how many degrees of image rotation is considered acceptable.

I’ve only had it for like 2 weeks, so I’m a little antsy about it being solid

Justifiably! I would be more than a little…

Sure can’t blame you for being a bit anxious. Posting today though, should be like a post marked date in the mail…you made your plea within the time allowed…barely…and that should put you in good stead with support. Hope you get an answer/resolution soon. You are a patient woman, my friend.

You are a patient woman, my friend.

I like to think I’ve lived long enough and experienced enough stuff to know when something’s a real emergency and when I just need to chill and be thankful I mostly only have first world “problems.”

We’re seeing this too and the team is looking into it.

As a workaround, converting your design to a bitmap will consistently prevent the extra line from appearing.

I’m going to close this thread - if you continue to see the problem while using the workaround, go ahead and post a new topic. Thanks for letting us know about this!