Your response actually didn’t address either of the two issues noted in my post of 10 days ago.

5 Likes
Full Engrave Settings Template for GlowForge - Engrave this template to get a good idea for how your settings will look
geek2nurse February 28, 2019, 5:57am #2

One of the problems with issue number 2, by the way, is that it makes my effective printing area smaller than it is supposed to be. The image is rotated in the GFUI, but the cutting / engraving margins aren’t, so the total area where I can place artwork is actually less than for someone whose bed image is straight.

I really would like to have some sort of (relevant) response on these issues…pretty please?

I’m not sure that rotation issue has anything to do with your latest machine, you might have caught a bug. It has been that way on mine for a while. I never paid that much attention or bothered to measure it before today.

Mine’s not quite as pronounced as yours, but where we used to have a full 19.47 inches on the horizontal, now mine gets trimmed to 19.125 inches. (Due to either the rotation, or maybe they reset the limits. Or maybe it’s due to the Snapmarks version of the software.)

So…maybe something in one of the recent updates…might be a little glitch. 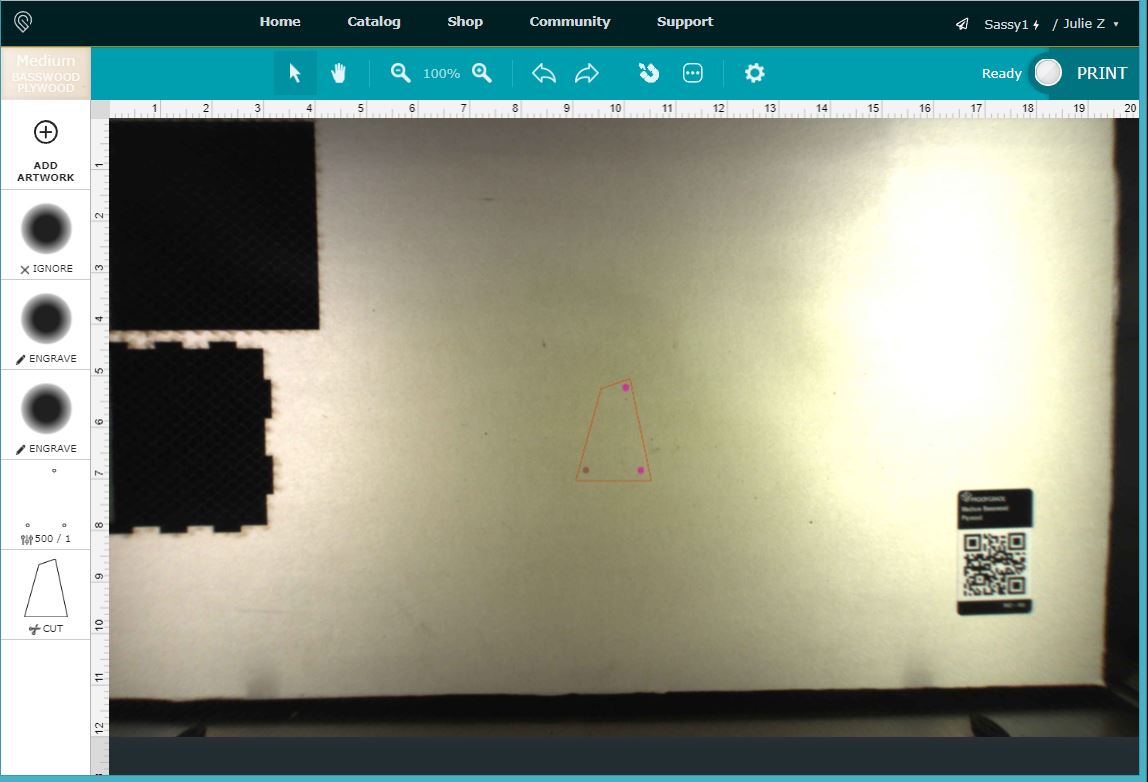 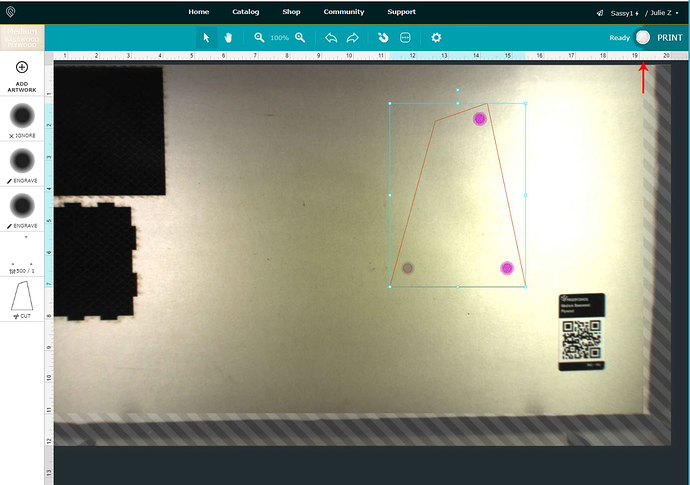 (This might be more wide-spread than just that machine.)

Glad you brought that up…mine appears to be trimmed to just over 18 point something at different zoom levels once in a while. (Doesn’t look stable.)

Maybe the problem is the RULERS. There’s another post I was just looking at a second ago where the poster was complaining that both of his machines were coming out stretched from what they used to be…same files as before so no changes there.

. Might definitely be a glitch. Those can be a bear to find.

You might want to run a small measurement test on yours to see if things are coming out the size that you intend. (For instance a 1 inch square comes out to 1 inch, less kerf.) I might do the same this morning on a few different sized objects to see if the actual sizing is changing, or just the appearance of it on the screen.

My sizes are fine. My cuts come out exactly right. Detailed scores not so much, which is the first issue I mentioned up above, and showed in photos in the first ticket that was prematurely closed.

The second issue is the bed rotation, which makes it impossible to visually place anything with any kind of accuracy. With all my previous machines I had a sense of how close I could put something to an edge and not have it go over. With this one, depending on where on the bed something is, it might cut farther up or farther down AND left or right of where I place it; trying to visualize where it will actually fall is mind-bending, so I end up losing a lot more material to bad guesses, either because I have to recut the piece or because I had to place it an inch away from any cut edges just to make sure it would actually end up not hitting one of them.

Hmmmmn. I think one of the reasons the changes didn’t much register with me was that I can’t go outside of the gray bars anyway, and they well cover the edges of the material, so it really hasn’t been much of an issue. (Guess I’ve now learned not to trust my eyes.)

And with a Pro model, if something didn’t fit, I just rotated it and stuck it through the passthrough.

Well, they’ll either start looking into it, or it was snuck in by design - to keep people from carving up their trays. At least it’s been reported now, so that was a really good catch. I probably would have never noticed.

Don’t you ever cut small things from scraps?

It’s not a change in the software. My bed image is rotated on the screen. If I rotate my artwork to line pieces up parallel with the edges of the image, however, they don’t cut parallel; they cut at an angle to it.

Here’s an example: If I place this piece like this, and cut it, the cut will actually end up perfectly parallel to the right edge of the material. 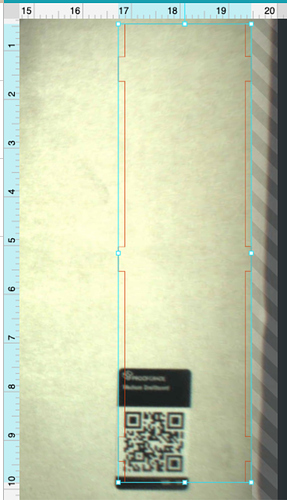 So now extrapolate from that, and imagine you’re cutting a small piece from a piece of material that’s had other things cut out of it, and figure out if you need to move it left, right, up, or down to make it fit within one of the uncut areas. It will give you a headache.

I kept telling myself I’d get used to it. I haven’t. At any given location on the bed, things end up some different combination of higher/lower and left/right of where I visually place them.

Here’s a full-bed screenshot showing how the top and bottom of the image measure more than 1/2" different on the X axis. I’m not asking to be able to align things visually with pinpoint accuracy. But with the rotation, I’m really not even getting the 1/4" accuracy promised, because the 1/4" varies up, down, left, and right over the bed, which really makes it a 1/2" variance in real life. 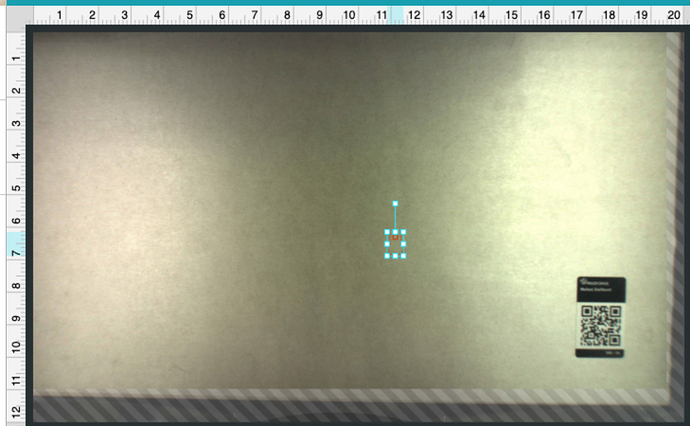 I believe it might be a change in the software. (Their “behind the scenes” processing software, not the interface that we use.) If my machine is doing it too, and it didn’t do it before, and it’s the same machine I started out with…then it might be more universal. My lens focus hasn’t changed, just the visual rotation we see on the screen. That’s based on a picture that they take with the camera and then send back to us via the cloud connection, I think.

Are you running Snapmarks on this machine? I’m now thinking it might have been there that long with mine…we’re on a different version of the software with that. (Which is one of the things I kind of expect with testing, so it never even registered, and I didn’t think to mention it earlier.)

My machines have been through at least a half dozen changes in “view” and “alignment” over the last couple of years…they’re still working on them, so it happens. And every time they make a change to one process, something else unexpected can get a little out of whack somewhere else. They’ll find it and fix it, they just need to know to start looking for it…that’s why it’s so good you mentioned this. They should probably go take a look, maybe they’ll find it.

For this kind of hunt though - we probably won’t get a speedy answer. It can take literally months to track some of them down.

Just my opinion, but I’m pretty sure this is more a result of the camera not being planar with (ultimately) the material surface.

Quite possible. My lid glass is a little warped…sits proud on the right by about 2.3 mm. That would cant the camera slightly.

That wouldn’t change where the cutting limits fall though - that’s the one that’s got me curious.

It was like this when I got it. Snapmarks showed up later, but didn’t affect the camera view at all.

My glass sits flat, no warp.

Hmmmnnn. Don’t know. That makes it harder to find.

If you’ve always had small variances, you’ve either been incredibly lucky, or I need to start bitching a little more.

I put a photo of the GOGM in the original post. It’s off by just a hair less than the 1/4" max.

we probably won’t get a speedy answer.

Yeah, unfortunately, it might not have been recognized as a coding issue then. (AKA…the clock might be restarted.)

They don’t have a way of knowing that a problem impacts more than one person until other people chime in. (Which is why I popped in with another data point.)

One thing I’ve noticed though…there are a couple of sizing issues posts popping up now…it’s tough to tell if they are new user error or maybe there is something going on that actually needs chasing.

The 1/4" off thing might improve over time as they capture more data on the specific machine with the algorithms that they are running. You might just see it get better one day. (That’s the way mine has worked.)

it might not have been recognized as a coding issue

You might be right. Guess they’ll let you know once they look at it.

UPDATE: I’d still like an answer regarding the vectors being inconsistently scored.

BUT… my bed image rotation has changed from a big slant to a smaller curve, which I’m hoping might be a little easier to work with. (I still need to run some tests to verify, but I’m hopeful!) 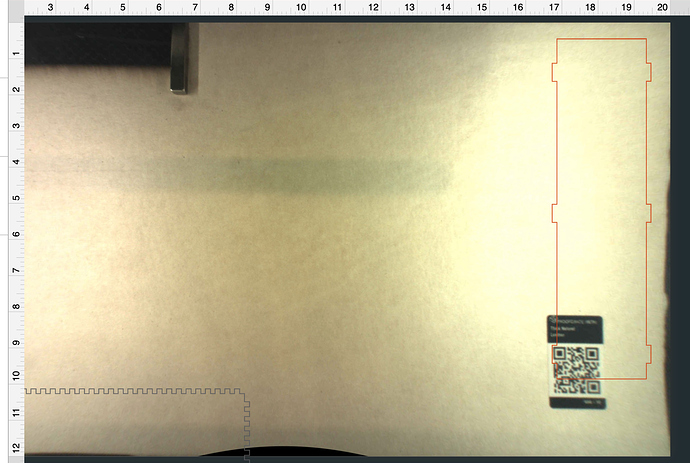 So despite the lack of response from support, they may actually be working on my problems. I just wish they’d SAY SO, because it’s kind of hard to sit here waiting for weeks feeling ignored while others are getting their issues addressed.