Here’s a screenshot of what I see.

Using certified material, the device is able to figure out the bar code (but only sometimes, lately, if that’s a hint).

But when I hit choose “set focus” and point to any part of the bed, it returns the error, “Material didn’t measure”.

I’ve not changed anything in my setup. I’ve cleaned both the moving head lenses as well as the lens on the top of the lid. I’ve restarted the machine and restarted the app in my Mac.

It’s able to work without set focus, but I’ve found better results when I focus on the small area I’m cutting and I’d love to have that back.

Perhaps unrelated, it was also cutting a full five inches from where it said it was going to. I took advice from a kind person here to turn it off and move the gantry back and forth a few times, so that seems to have been addressed.

Any help would be appreciated. I hope you and yours are healthy and finding peace of mind. 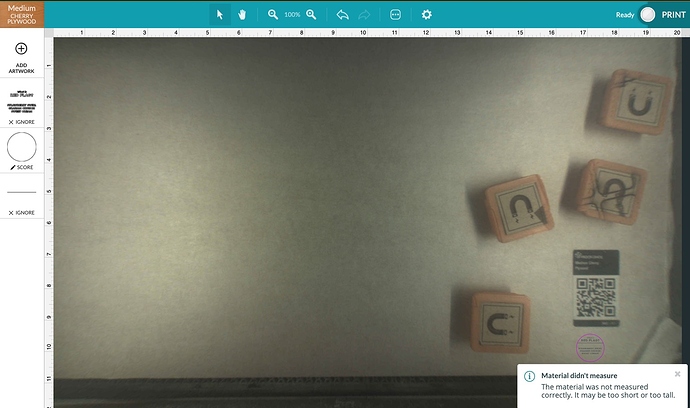 Are you trying to place the engraving on something sitting on top of the Proofgrade material? What are those?

It looks like what you are trying to score may be too close to the laser head. Try taking out the honeycomb and the proofgrade, see if that helps.

thanks @Jules you continue to amaze.

I updated the OP to answer the queries so they wouldn’t be buried in the thread.

Happy to do any tests that come to mind.

thanks @marthajackson1970 . If I take out the honeycomb and the proofgrade, the bed will be too far below the laser. Am I missing something?

Also, to amplify: I’m 400 or so projects in, and this is only happening now, for the first time, as of yesterday. So my hunch is that I’m seeing this alert for the first time because of a software update or because something broke in my hardware.

Searching this forum for the error message, I don’t find one match…

How tall are the items you are scoring?

Ah…okay, I was confused for a bit by the magnets. If you’ve done this 400 times, you know what’s going on.

When you send something to print, or use Set Focus, the head is going to move out to the center of where your design is placed and shoot a red dot at the board for a just a fraction of a second. You have to be watching closely to catch it…but you might want to watch for that a couple of times after you hit Set Focus to see if you see the little red dot shoot out. There might be something wrong with a window on the bottom of the head, or that laser might not be working.

the proograde medium cherry is whatever it is… .125 inches?

well that was good exercise! It’s in the other room.

So I hit “set focus” and sprinted

and got there in time to see, yes, in fact, a red dot.

It didn’t seem particularly sharp or focused, but it was there, and then the head retreated.

Yeah, i just have to run across the room, but it’s still a sprint to catch it.

If that red dot lands on the material (and not in a cutout) then you should get pretty good alignment for this next print that you run. Try a small print and see if it aligns properly this time.

I made a movie

I’m not questioning whether or not the glowforge can cut what I’m sending it. It can. I’m pointing out that the feature that I had for a year that was very nice to have (to ensure more in focus cuts and to save me having to measure thickness of the material) is no longer working and is giving me a new error message.

wanted to figure out why it broke and how to get it back!

I was hoping these preliminary tests might help to eliminate a mechanical issue.

But, (unfortunately or fortunately), it looks like it wasn’t. I’m out of ideas for what could be causing it, so it might be something in the software. Just don’t know how that could happen on one machine without something mechanical associated with it.

Anyway, support might see something from the logs. Sorry that didn’t do it.

thank you Jules. You’re a prince among hedgehogs.

I’m having tons of issues with mine. I cut thin fabric forever since I got it. They then made an update and now it requires that I put a piece of acrylic underneath it to cut that same fabric and my prints are literally now taking twice the amount of time. This is becoming fustrating. Nothing changed just the update and then all of a sudden problems left and right. I also believe that more people are starting to experience similar issues.

I would check the cable going to the head and make sure it’s seated correctly and you don’t see any spots rubbed in any of its wires.

Looking at the video I see the laser dot as more line than dot. I have never caught mine so I don’t know, but I would guess that it would be easier to measure where the dot was than a line. I think a scratch might spread that dot out.

@dan I think there may have been changes yesterday that affected some people.

I made a movie

That red laser is the distance laser. It used to be on longer to check distance.

So what happens is it projects a red dot/blob through one of the two little windows on the bottom of the laser head, at a 45 degree angle, and takes a picture with the camera in the other window. It then sends the picture up to the cloud where they do some processing to infer the height of the material from the position of the dot. 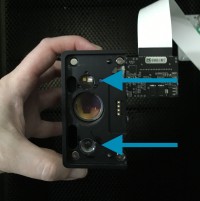 If the red laser wasn’t working, or was landing in a hole on your material, the problem would be obvious. You said you cleaned all the optics, so the next easiest thing, a smudge interfering with the camera, is probably not it (but if it were me, I’d definitely give that another wipe). So the only things I can think of are:

That last one seems the least likely, since it would presumably affect lots of people.

The good news is that once someone from Glowforge support gets to this ticket, they can probably look at the images your machine is sending back and immediately determine what’s wrong.