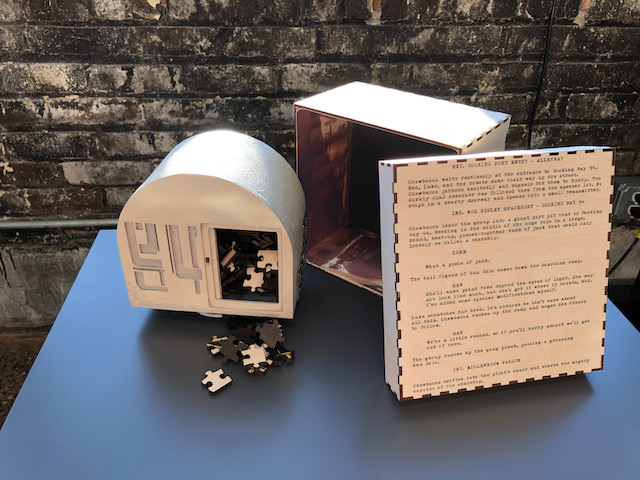 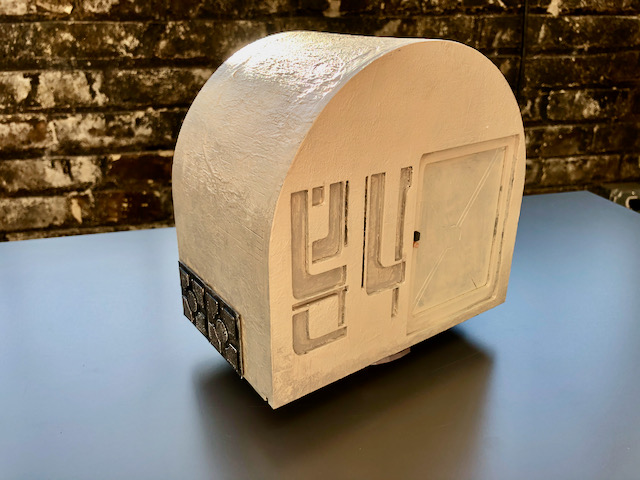 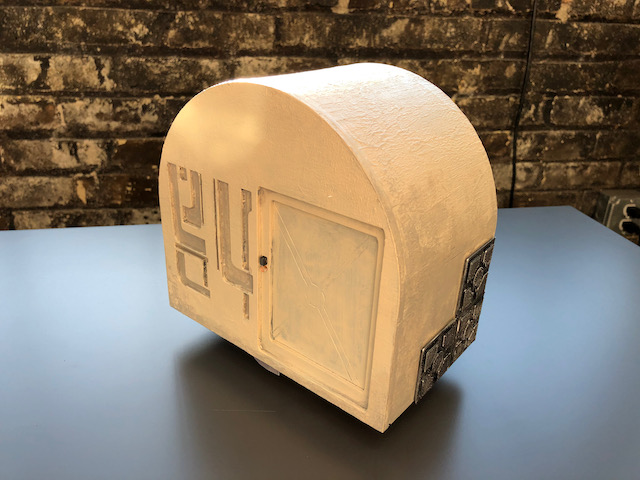 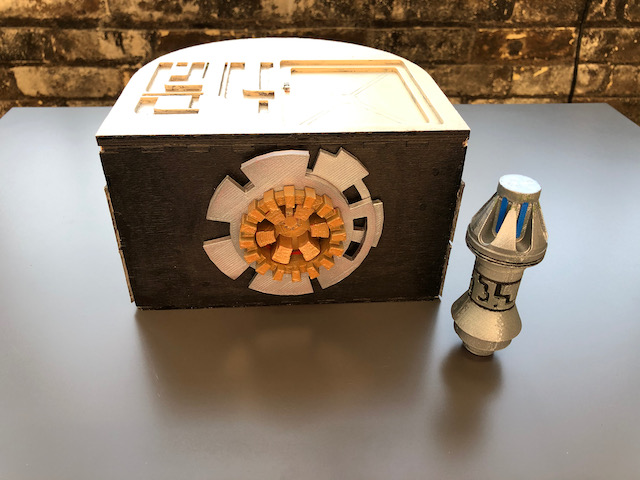 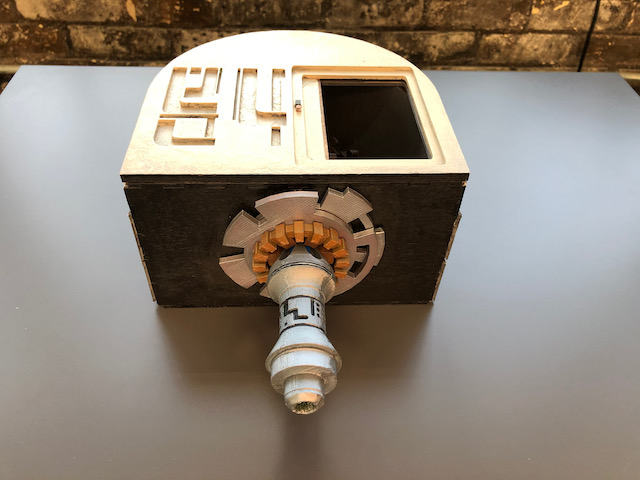 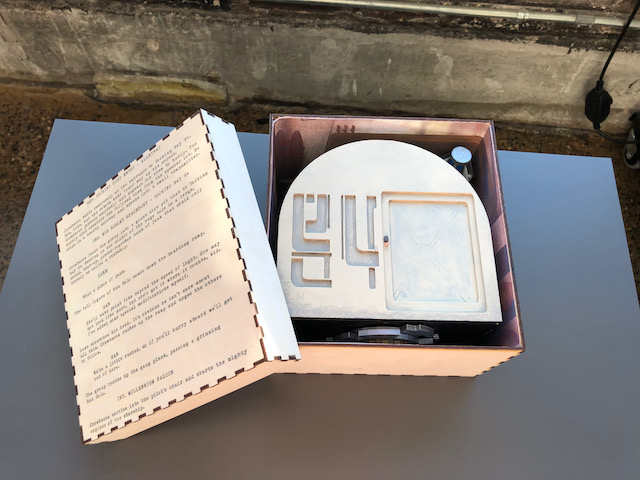 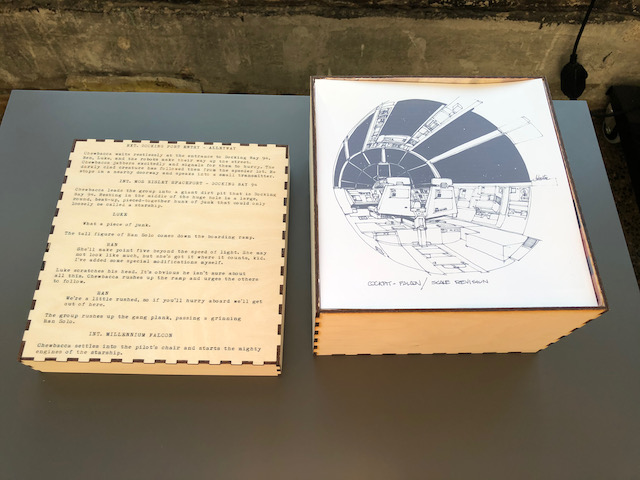 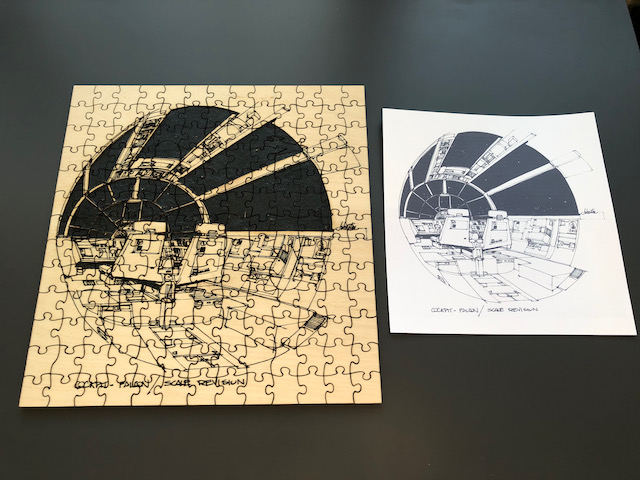 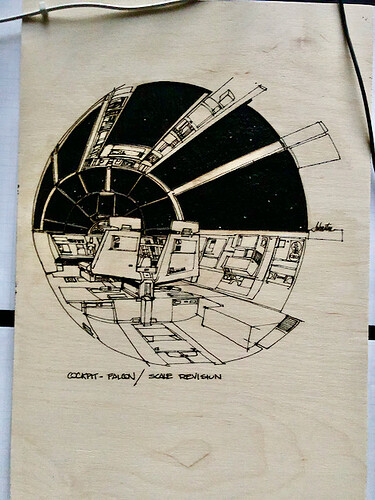 My sister’s birthday was in February and I made a custom jigsaw puzzle and box for her. Chewbacca is her favorite character from Star Wars, so using the scene where we meet Chewbacca in front of Dock 94 at the Mos Eisley spaceport as inspiration here’s the gift I made. Although it might be kinda hard to see, I was heavily inspired by KelliesWorkShop and her Star Wars themed ornament: The Empire Doesn't Care About Your Christmas Tree (Ornament) - #56 by KelliesWorkShop Thanks for the inspiration Kellie!

I found a jpeg of a sketch detailing the flight deck of the Millennium Falcon drawn by Joe Johnson: Joe Johnston - Wikipedia. I engraved it onto 1/4 Baltic birch plywood. To make the engraving really pop I covered the front with Frog tape brand painter’s tape, and left the tape on after the engraving was done. I used a wood embossing tool and stiff brushes to clean up the soot and small bits of charred wood, then airbrushed the entire engraving black. I used a nice deep Kona wood stain for the back side of the puzzle. Following the helpful advice I found in the community forums I downloaded an Inkscape extension Jigsaw Puzzle Generator Jigsaw puzzle generator to create the SVG puzzle peices, and added a few custom pieces of Chewy, his bowcaster, the Falcon, and a profile portrait to make the puzzle more custom. A few weeks later Glowforge came out with the new jigsaw feature so that certainly would have saved me a lot of time but I’m still glad I did what I did so that I could customize a few puzzle pieces.

I made files for the the half dome box and the square box using Boxes.py, also suggested from the community, (thanks everybody!). I absolutely love that site and will be using it a lot in the future. The internal gear to open the door was created with Involute Spur Gear Builder

I downloaded STL files from Thingverse for the parts I needed to 3d print: the droid arm: R2-D2 Computer Interface Arm by FreeFlowDesigns - Thingiverse and droid interface: R2D2 computer socket interface by mascal - Thingiverse. I created a custom insert for the droid interface to fit the droid arm and turn the gear using www.tinkercad.com. The crates I stuck to the side of the box I got from Star Wars Crate by Chase_Graybill - Thingiverse. From Womp Rat Creations I downloaded a SVG file for the Dock 94 sign/front of domed box: Downloads — Womp Rat Creations.

To create the texture, weathering, and colors on the Dock 94 box I watched a TON of Youtube videos but the one that was by far the most helpful was by the channel The Smuggler’s Room with their video: Star Wars Model Building | Christmas Village? - YouTube

I found a copy of the original movie script of Star Wars A New Hope and found the page where Luke, Ben and the droids meet Chewbacca at Dock 94. I used the iPad app ‎Hanx Writer on the App Store to type out the movie script onto one page so it would look like it came from a old typewriter and downloaded it as a jpeg, which I used to engrave the top of the square box. Again, I left the tape on the lid and painted the engraving black to make the type pop. I layered the bottom with some leftover black foam and printed out some free jpegs of random Tatoonie scenery and glued them to the inside of the box.

I put the puzzle into the Dock 94, closed the door, put the whole thing in the box with the droid arm, and gave it to her. She loved it.

The only thing I’m not sure of is my use of Joe’s sketch. I had no idea how to get permission from him to use his drawing in the making of this gift, but I’m only making this just for my sister, and not being sold or used for any commercial use, so as far as I can tell I should be ok. If he ever finds this, um, Hey Joe! Let me know if this was ok!

A big thanks to the glowforge community for all the advice and tips and tricks. I was able to find all the info I needed just searching the archives. I’m sure I’m missing some links and other people to thank, but this gift took me a month to make and I simply can’t remember all the questions I got answered searching thru the forums.

That is a frickin’ piece of art! I hope your sister adores it

Thank you! She did love it. She said she’s never had such a customized present and I was treated to her awesome Chewy roar over a zoom call when she found the custom puzzle pieces!

That is so awesome!

Wow! You did an outstanding job! What a thoughtful gift idea and the details into it is impressive.

OMG! Thank you so much Kellie! I drew a lot of inspiration from your ornament that (obviously) evolved from there, I’m so glad you liked it!

Sooo cool! I bet your sister loved it!

I am so jealous of your sister! This is incredible!

Terrific work! A keepsake for sure!

Very ambitious project. She must be a great sister.

wow!! that’s so awesome, and such amazing gift! I’m wondering how to store and keep track of all these tips and tricks! Star wars is my jam! The Force is with you!

Such a labor of love that your sister will treasure the rest of her life. That custom key is so cool.

I am never without amazement when I see the peoples talents unfold and artistic, clever and beautiful projects are created.