The wallet was laser engraved with a live hinge and laminated to a leather backing for additional support. The two pockets were then stitched in place. The brown pockets are finished with Fiebings chocolate dye, with the centre section left in its natural state. All leather components have been finished with carnauba cream and the walnut has had a light coat of tung oil.

Next time I’ll laser the stitch holes to mimic those of a pricking iron and awl to achieve a prettier stitch. I’ll be sure to share the results when I can. 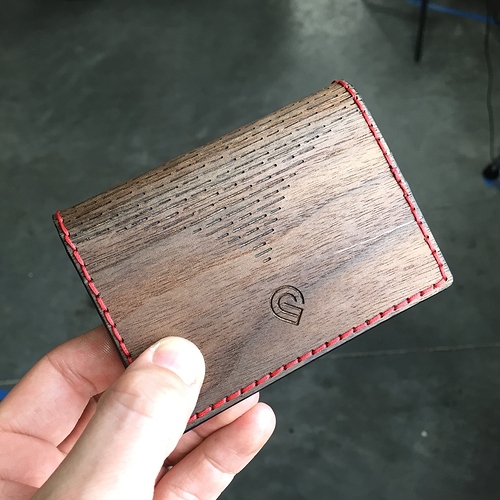 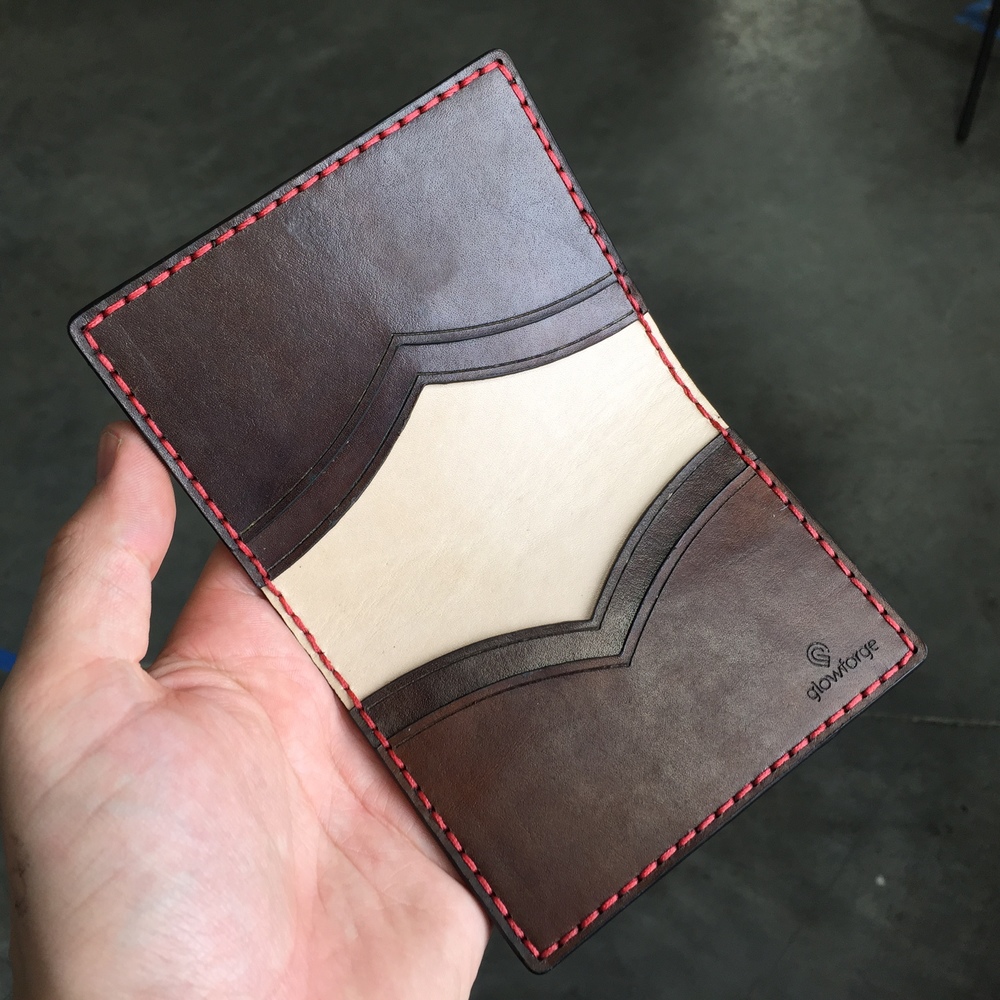 Cool, it’s great to start seeing some thing other then etched acrylic.

What program did you use to design it? illustrator?
It would be cool to see how you laid out your file.

LOVE. IT. Such a great use of the live hinge. I agree with @ianauch, I would love to see the project file!!

Now, that, I like… a wallet made of walnut. Can’t get much more legit than that! Awesome

Ah it looks to have a lining… Did you use leather for the inner side of the walnut or is that a thin cloth layer?

Is the wallet hard to bend since the wood and leather are laminated together? im interested to see how you attached them.

I like probably most of the people here love that you are there making real items there and they look like very high quality too!! so for that we Thank you!

That is so cool

I love that you’re sharing these projects! Really looking forward to seeing more!

Now if you guys could write me up some software to take a 3d model, and then apply all the cuts necessary to a thin piece of wood to wrap around it perfectly, like to create some wood armor… that would be amazing. Should go in the hopper

This might be close to what you need- Pepakura is a program that will take a 3D object then unfold, facet, and tab it for you to assemble out of a flat material!

Oh I am well versed in pepakura, but thanks! I was partially joking, but also slightly hoping they would take me seriously. The process of unfolding for pep is a bit different than what creating an algorithm to allow for curvatures in wood would be. Pepakura relies on reducing polygon count to allow for larger surface areas to be shown, having sharp edges, and creating negative spaces to be filled in with bondo or fiberglass, usually to create a pretty rigid object (so many people making pepakura ironman armor); whereas I was thinking about the possibility of taking materials and having them wrap around your body with cuts (like in the book edge), but on a more three dimensional scale instead of two. Ive seen some of the patterns that have been put out by people to allow for flexible plywood, and I feel that if you created a library of enough of these patterns, you could start to profile which work better in what flex situation and could apply that to a 3d model to ultimately let you cut a fully wearable piece of wood with as many flat/non cut spots as possible, but still maintaining mobility. Now that would be pretty awesome! What a mouthful. haha

haha yeah, can’t help with figuring out curvature…yet! But oh man would that be awesome if there’s an algorithm to figure all that out.

This could definitely go hand in hand with some of the material calibration data they are collecting. I dont think they are profiling material flexibility though. Ive seen a few people do some bend tests on different materials, and it shouldnt be too hard to get a formula for each. The margins of error would be greater for stuff like wood obviously, but there might be a way to add some reinforcement to those since they are porous, like a rubberized resin or glue coating to provide some supplemental support and bonding.

The cut pattern I think would be the interesting part, and its starting to make me wonder how much ability the glowforge will have to adjust kerf. I know they are aiming for a minimal kerf here, but if a slight defocusing of the laser would allow for a larger kerf on the inside of the bend, it could allow for less of a visible gap on the outside. So, kind of a conical cut.

@dan @madebynick - do you know if this is possible (larger kerf by slight defocus of the laser), and if so what type of kerf difference (even in %) could be expected?

If anyone can do it, these folks could. In Spanish but very much into exploring curves and shapes, design, materials, and fabrication, mixed with lasers and other CNC.

Whoa, that’s an awesome link! Thanks for sharing!

wow, this link has some pretty interesting projects. theyre even using laser engraved plastics to pull onto bucks on their vacuformer. I hadnt considered this… Im gonna have to give it a go! Thanks so much for this link!

Very cool. Can you post a picture that shows what kind of gap is left by the living hinge when the wallet is closed?

I can’t share the project file at the moment but I can tell you that this one isn’t particularly special.

Whereas I understand it’s possible to calculate optimal cut length/width/etc for a specific bend (see here), I simply guessed on this occasion!

The walnut is laminated to a piece of leather, around 0.75mm thick. It’s attached using contact cement.

That is really awesome work, I love it, but I can’t see that thing staying closed on its own. The wood veneer would want to bounce back even with the hinge design. I guess in order to keep it closed an elastic would have to be used.