Trying to figure out 3d engrave and failing hard

Tried to figure out how 3d engraves worked today and I have made… no real progress. Here’s 4 attempts (across two images): 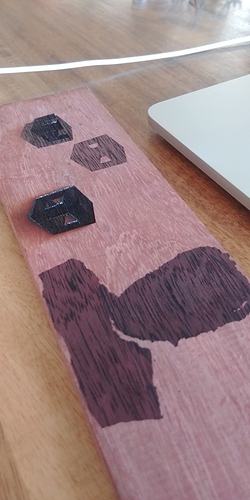 Everything is basically flat. It’s possible the scorched one had some 3d-ness to it, but it’s so charred it’d be unusable for anything other than a test. (I forgot to move something in the GFUI, so the test on the far left is two jobs on top of each other)

These are the two files I’m using:

The material is a piece of scrap wood I got from the bargain bin. Not sure what it is.

Very confused about what to try next. I’ve read about 15 threads on the forums about 3d engrave, but haven’t gotten any insight into what I’m doing wrong.

One you need to adjust your contrast so that you get a really high dynamic range. If you don’t know how to use curves, now is the time to learn. You want your engraved areas to range from pure black to pure white for the greatest height differentiation.

Two, slow or way down. Like speed 150. You’ll char it a good bit but get depth for sure.

After that it’s a matter of fooling with other settings like lpi and multiple passes. Engraving is easily the most complicated thing we do with the Glowforge.

It could very well be the wood. Oak, maple and walnut are good options. Softer woods might burn/char more and exotic dense woods might not work well. What kind of depth are you expecting? I’ve gotten 1 to 2 mm while etching grayscale 1 pass images. I haven’t actually tried a 3d image…yet. Try with draft board or any of the PG woods, might give you better results. Also, make sure you use vary power and not convert to dots. Good luck.

It could very well be the wood.

To that material list I would add basswood right up top. Super soft and very responsive to power variations like the kind you are applying here.

In case you haven’t seen this:

Tutorial - Creating a Depth Map from a 3D Model for 3D Engraving! Glowforge Tips and Tricks

Here is a quick and easy tutorial that I know a lot of you will find useful. Creating a depth map from a 3d file! This will allow you to do 3d engravings like the ones youve seen me post. First you will need to download and install Meshlab. Its free and open source: http://www.meshlab.net/ Next, import whatever file you want to make a depth map from. Im gonna use Han Solo in carbonite. [File -> Import Mesh] (if you dont have a 3d model, just google what you are looking for + “3d model”. Youl…

It looks like you have the image reversed. the whitest parts of the image should be the shallowest or the surface that is not engraved at all. The darkest needs to be the farther back stuff that gets the deepest.

So for the cube that has the holes in it, that will just not fit with having the closest stuff white.

Gradient Engraving Basketweave Pattern Made on a Glowforge

Sarbarmultimedia and @m_raynsford have some interesting tests at variable depth engraving. I won’t call it 3D because these are far from finished examples of what will be possible with 3D engraving enabled. I’m curious, especially with @takitus chipping away at this feature on the Glowforge. I thought I would see how gradients in Inkscape worked, exported as a PNG with no processing. Just brought in to the UI, rescaled smaller and printed. <img src="//discourse-cloud-file-uploads.s3.dualstac…

What he said ^
The tip of the nose in the figure should be white, the shallowest, graduating to darker corresponding to depth. Same with the box. Deepest is darkest.

Try this, its a pretty standard one. Also keep in mind purple heart is a pretty dense wood, so it wont work as well as softer woods like maple or poplar. This should give you better results than your previous images though. 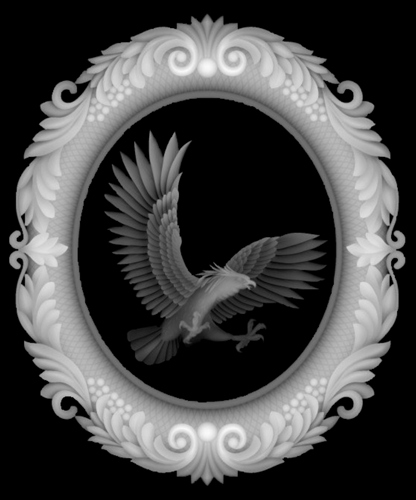 Also: multiple passes will help you. Even if the depth diff from one pass isn’t so big, it adds up with multiples. (I like going reasonably fast to avoid too much char, but everybody’s mileage varies.)

Try a softer wood (basswood is my favorite) and you need more contrast in your images for good results.

Here’s an example of how an image will translate into 3D. The link below has another example. 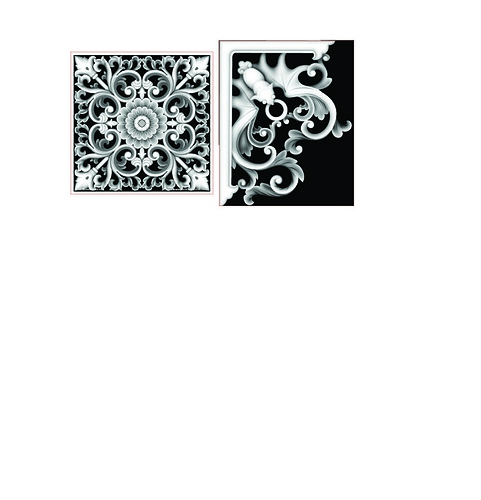 And then there was 3D Made on a Glowforge

This is gonna be so much fun

Did the crow without any adjustment to the file I had already made and still looks pretty darn cool. The last pic is just a sneak peek of something that turned out pretty neat if I do say so myself. (Not that I had much to do with it really.) After doing the initial 3D engraving with a photo of a CNC file made by Yura Tikhonovskiy, I’ve made some adjustment to the pic to see what further detail I can bring out. It’s cutting now. (I’m not going to pos…

I would make a new test object, something like a row of grey boxes: 0%, 90%, 80%, etc. Then you can see how your material responds to different power levels, and then you can adjust your depth maps accordingly.

Also, I second or third or whatever the call for basswood. It’s awesome.

TY everyone for the advice. I think it mostly came down to the wrong type of wood. The colors being inverted didn’t really help either.

I successfully did the bird one that @takitus posted, and it looked good. I’m testing the face image I posted earlier again right now, this time with different wood, a faster speed, lower power settings, and multiple passes.

Turned out much better!!! Now I know enough to keep testing and iterating. Thanks y’all! 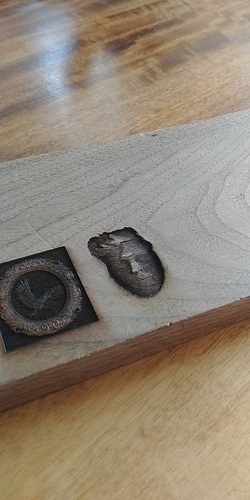 You may also want to do a cutout or an initial deep engrave around the 3D area to keep soot from accumulating at the downwind edge.

@paulw can you say more? I’m not sure I understand.

When you do a 3D engrave, you’re creating a lot of debris (in wood, mostly soot, in acrylic, kinda like snow). The air-assist fan blows that out of the way, but not that far. So if you’re engraving down into a surface, some of that debris is going to get trapped in the little depression(s) you’re making, especially at the “bottom” end of the engrave, i.e. the direction the fan is blowing. The debris might need cleaning, or it might even interfere with subsequent engraving passes (because it makes the surface locally higher).

So if you cut the outline of the thing-to-engrave first and then take away the surrounding material, or just do a band of deep engraving around the edge of the 3D part, your 3D engrave will stick up from the surround instead of making a sort of pocket, and the debris will be more likely to be blown far away. Mostly not a big deal, except when it is.