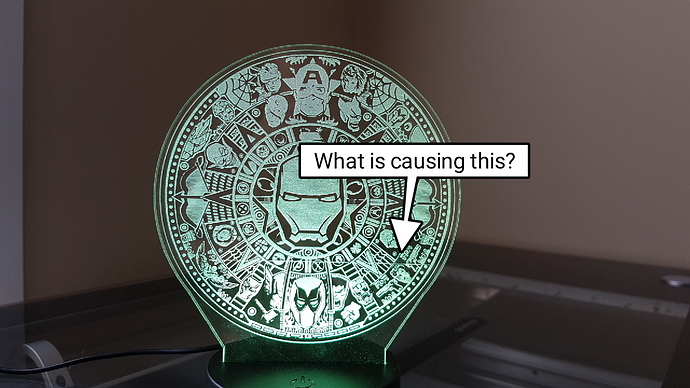 I looked for open paths and overlapping nodes and cant find where it is causing that !@#% kine.
Any bandaid suggestions?

I always do SVG way

I spent 1 hours on that engrave

Generally some jpg artifacts do that. I think I have that file somewhere, I’ll look.

Entire thing is a SVG. I never engraved rasters before. I should try that next time I have a hour and a bit to kill. Just venting out of frustration as this is such an awesome design

Select your pasted copy. Remove fill. Set stroke. Your rogue path will show up like a lighthouse.

Now that you found it, go find it in your properly filled original. Repair however you gotta.

Or, window > document info, and it will show you the number of open / closed paths.

Thanks, I tried both methods and there are no open paths in the original vector. It might be a overlapping node thing. This vector has so many nodes (I converted a DXF file into SVG but don’t know if that means anything) and the only thing made sense that node variable.

I’ll have to try it again when I have time. It’s a good opportunity for me to try and engrave a raster next time.

Looking at a blow up of the picture one end of the line is not near anything and the other in a mess of stuff, I have on many occasions highlighted a single node and accidentally moved it a fair distance and not realized it. That appears to be the case here.

You could have a twisted node, but almost always I have found a node that is not joined. They could be overlapped. It is frustrating, but there is something amiss.

I’ve had little bitty specs of a path do this.

Have you looked at in in outline mode? Zoom way in and pan left and right at that spot in the drawing.

I almost always do SVGs to for engraving. The added work balances out with being able to resize and edit much easier, but there are these issues that come up from time to time.

Post the file and let the hive mind at it.

Open it in another vector editor like Inkscape and see what it makes of it.

Just trying to think of possibilities.

Thanks, I tried both methods and there are no open paths in the original vector. It might be a overlapping node thing. This vector has so many nodes (I converted a DXF file into SVG but don’t know if that means anything) and the only thing made sense that node variable.

Select the whole thing. Size it up to 12” across. Export to png at very high res, like 600 dpi at least.

(Why 12”? Because that was larger than I can imagine you’d ever want to engrave it. It should show every bit of detail you’d want and trace nicely in our next step.)

You should have a clean svg now. Scale as you like.

Caveat: this is going to be a beast. No guarantees that it’ll work on such a complex shape. Your pc will probably grind away at it, and it may or may not ever complete. Be patient.

Would you be willing to post or send the file? I’d be happy to try and help.

Select the whole thing. Size it up to 12” across. Export to png at very high res, like 600 dpi at least.

There are settings (in Inkscape anyway) for the size in pixels that a PNG gets exported but there is also a way that if you bring an SVG into Gimp Gimp will allow you to set the pixel size but it has the added ability to bring in the vectors as Paths!

The paths are accessible on any layer and can be used in many ways from drawing along them to basing a mask on them. On a new layer you can use the to create a mask and then fill it in as black or any color or shade of gray or white and an export of that can make a nice vector line even as you substitute different less sharp versions from Gimp.

If you make all inside a path white and use the path to draw a black line and then apply a blur; it will engrave with a rounded edge.

I have not found a way to export from Gimp as an SVG but that would fix some of those workarounds.

haha - love this term. I may try this to learn new things if I find another issue with a similar file

Would you be willing to post or send the file? I’d be happy to try and help.

Post the file and let the hive mind at it.

Here’s the file I used. This is intended to be a remix file to be uploaded on Thingiverse but I won’t offer it if the file is not engraving properly. Originally it was a DXF for a CNC machine. My work is grouped by teams and my team is called the Avengers, which is my motivation to get this made for my work desk. It has a ton of nodes

Any help would be appreciated

This is the only thing that popped out at me. I re-merged and joined the paths again. I’d say try running this on a score operation first and then see what happens. 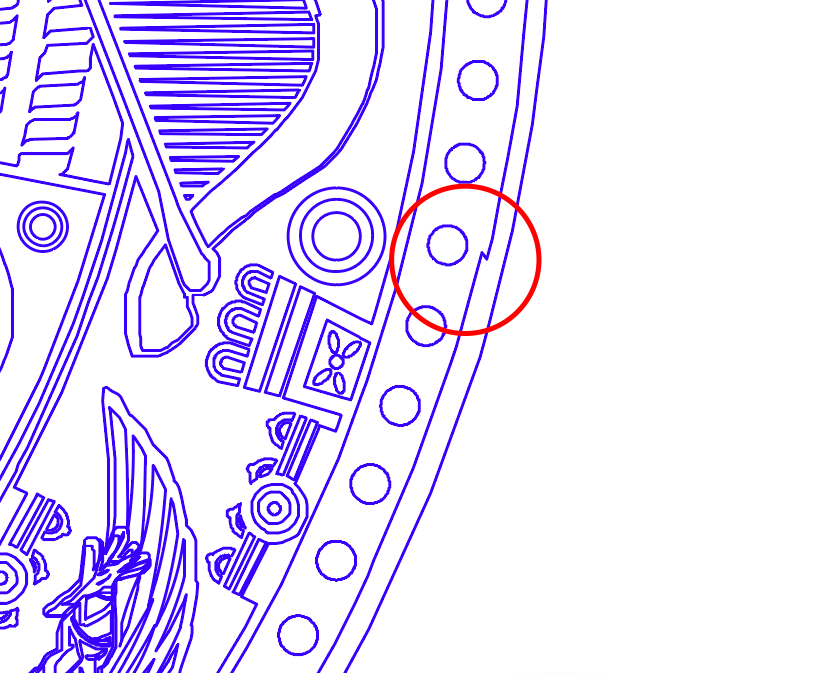 Objects shown highlighted below are open. You can select each one, right click, and choose Join to close. 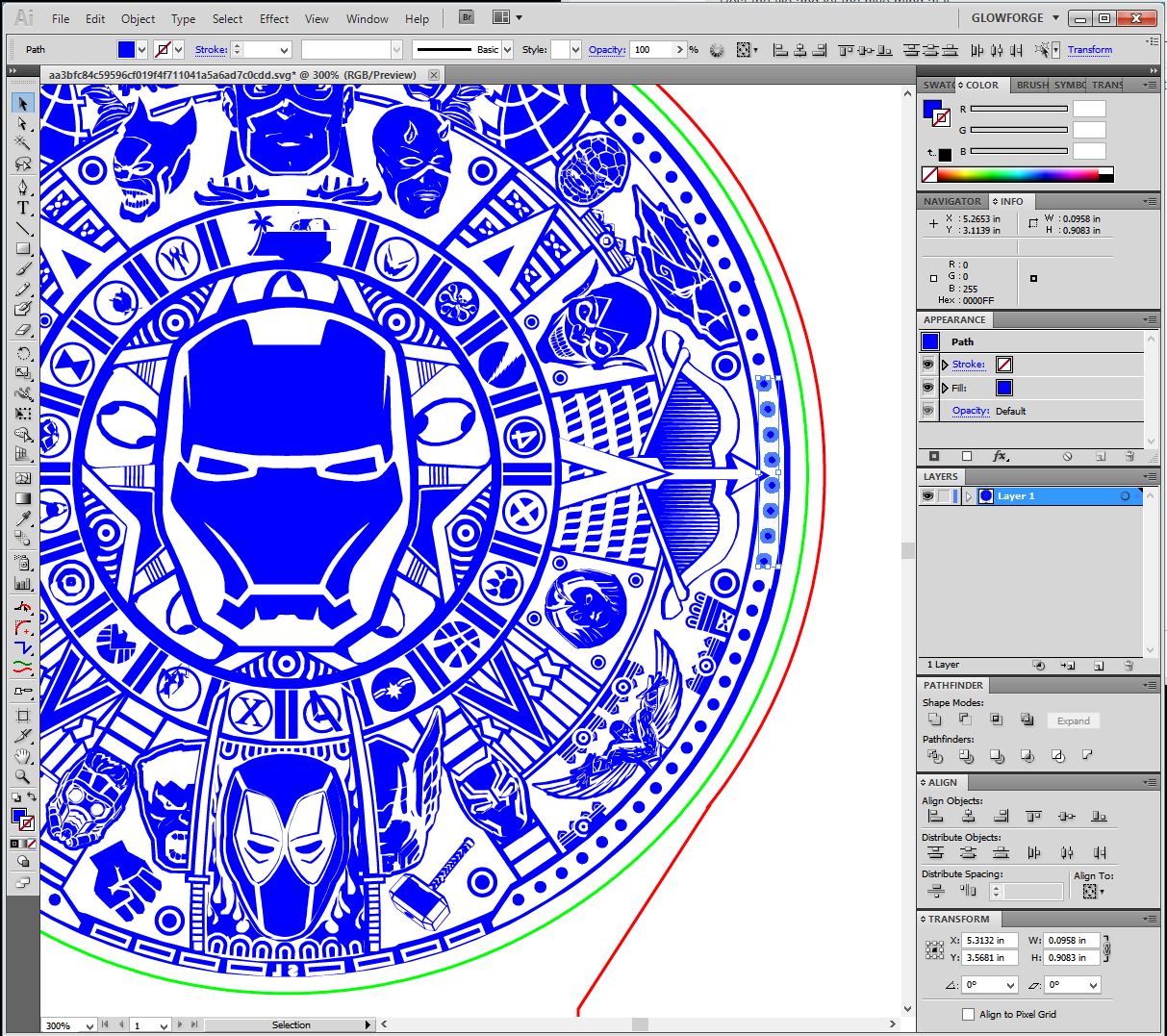 @Jules @dennis oh thank you! I thought I got all of the weird things! I’ll fix those and try engraving it again when I have time

That file has shown up multiple times on the forum and several people have had trouble with it. I think someone may have fixed the vector. Someone else put up a raster version.

Apropos of nothing but knowing you’re planning on engraving it again - take a look at the posts on defocusing your acrylic engrave - it smooths out the lines beautifully!