Has anybody else seen this from UPS? The other package (with the crumb tray) is updated with a departure scan and a delivery date of the 5th, which was the original delivery date for both packages I’m worried that my Glowforge is lost in the system. 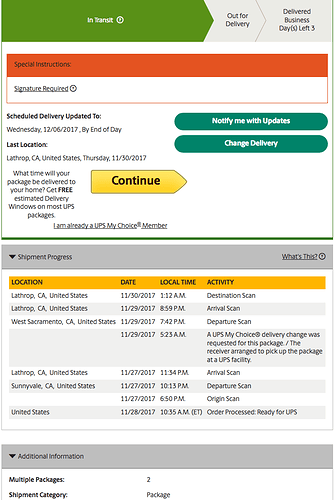 That whole “leaving Lathrop for a day trip to Sacramento and returning to Lathrop” is weird. However, I think the crumb tray and main package frequently get separated in transit- my crumb tray showed up on the original scheduled date, and the laser itself showed up a day later after spending an extra night in Portland.

UPS is notorious for misleading info in their tracking system. Just this weekend I was all disappointed because I was expecting a track saw that I ordered from Amazon to arrive on Saturday, and UPS updated the tracking to say it was delayed until Tuesday. Then it showed up on Saturday anyway.

My forge was suppose to be here today, but all weekend it is stuck with exceptions in IL. Last night I get the address label was damaged update. Newest delivery date is 12/6, but I’ll believe it when it starts moving again. Accessory box went through the same hub and out 11/30.

I just hope it isn’t sitting in a pile of glass while they figure out how to get away from the liability of it all. 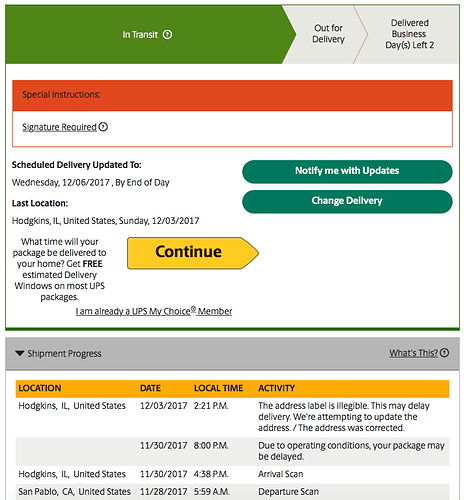 Not exactly that, but just the other day I received a “Your package has been delayed.” from UPS for two of my packages. Things get rough during the holiday season. Not an excuse, mind you, but certainly a fact.

Yep, this is a tough time of year for shipping. I had two UPS packages delayed from Thursday to Friday and a FedEx package delayed from Friday to Saturday.

Which one did you buy? I ordered one through Amazon that turned out to be non-functional, and it took 2 months to get my money back. That’s probably the worst purchasing experience I have ever had in the 19 years I have been purchasing through Amazon.

I generally have good luck with UPS; although FedEx has been extremely bad lately. However, with the GF, the UPS tracking information was very misleading. I never did figure out why.

Which one did you buy?

I got the Makita SP6000J1. This model is sold by Amazon, so no 3rd-party seller involved. I’m very happy with it, and it was significantly cheaper than the Festool.

Isnt Hodgkins a UPS Depot? Why don’t you call and pick it up there? I used to live in IL.

It is coming to Eastern TN, it was just passing through there.

It finally left this morning with a new delivery date of tomorrow. Fingers crossed.

UPS tracking can be very hit-or-miss.

We just got our GlowForge. Both packages arrived together, but the tracking showed one package progressing nicely through the system while the other never left its second stop.

(Also, the delivery date was consistently wrong. Started at Friday, changed to Monday, but delivery was Saturday.)

So funny! Mine is at the same Depot today. 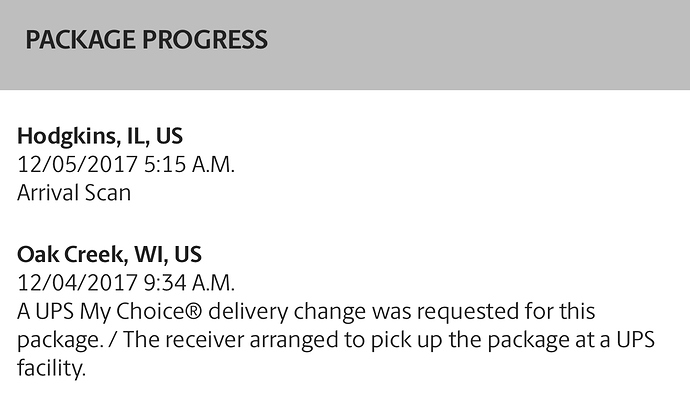