Wavy lines when travelling across bed

I recently posted about some banding lines which were fixed by replacing a carriage wheel. I’m back because ever since, things still haven’t been quite right.

I can engrave the gift of good measure fine. But if I try to engrave a series of them (ie forcing the head to travel from one end to the other), the lines are wavy.

I’ve tightened the carriage plate belt as much as I can and tried various degrees of tightness thinking it’s too loose or too tight. Nothing helps. I’ve followed the video and feel like the tension is right but it’s hard to tell.

I’ve also made sure the glowforge itself is stable. I don’t believe it’s wobbling from table movement.

Are there any other troubleshooting steps I can try? Could calibration help? I don’t have any medium draft board on hand and would need to order some.

No. Camera calibration simply adjusts how the fish-eye image it captures is displayed for rough material placement before a print.

That’s what I thought and didn’t want to pay $25 in shipping for no reason. I brought it up because I had come across some other people with this issue who were said they did it as part of their fix. But I suspected it was unrelated. 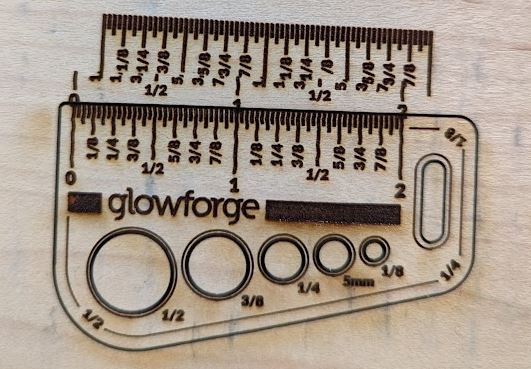 Bottom print is engraving multiple GoGMs, top marks are engraving them as a single unit.

Did you replace both wheels or just one? Have you inspected the rear wheels of the carriage plate? Have you ever had a fire?

It was just one wheel that I replaced, but all 4 seem to be moving fine, no cracks or anything. I did have some masking peel and ignite in early December and I stopped my print early and it was out in a few seconds. I have previously suspected that was what damaged my wheel. I’m tempted to replace the whole carriage plate now.

That is a mechanical issue.

I am really confused. Isn’t this the same issue as this is? Diagonal banding lines when engraving

no, when I was getting those banding lines, it was a repeating imperfection in large engraved areas, which is now resolved. This is an issue that looks like the head is sliding or something since I’ve reinstalled everything. I suspect its belt tension but I can’t seem to get it right.