Weather and the filter hose out the window

I had a question, perhaps it’s an obvious one, if there would be any problems with the venting hose out the window during rain or snow storms or if that should not effect my ability to use the Glowforge. I’m thinking about perhaps using it from the second floor of a building with no overhang protecting the window from the elements. Do I need to worry about precipitation coming down the vent tube? My wife and I are here in Utah and experience snow throughout the winter season, which is also the holiday season great for putting our creativity to work on the Glowforge. It could be that someone has answered this but I haven’t found anything about it yet.

Is it possible to put a flapper (like a dryer setup) on the end of your vent hose? Or, you could put a T in the hose with a water drain. Go

Shouldn’t be a problem. I have mine (in CT) vented outside now. It goes to a dryer vent on the inside and that goes through the wall to a flapped door dryer vent cover on the outside. When my laser is running it pushes the flap open and all works well. When it’s not, the flap drops closed and no snow/water gets inside.

I originally bought the GF Pro so I could dispense with that and put it into the basement (my laser is in the garage). But I’ve decided to add a hose connection to the basement as well and use that whenever I’m doing acrylic so I don’t clog the filter prematurely - save me some $ in filter replacements and it’s not that hard to deal with adding the vent.

I was going to design a wood or acrylic piece that I put in my window so I can still seal it and not let in (as much) cold air.

I have my vent going through 3 layers of cardboard that I cut to fit in my window. I generally leave it in the window, but I pop it out and shut it when the weather goes down hill or when I’m out of town.

Shouldn’t be a problem. I have mine (in CT) vented outside now. It goes to a dryer vent on the inside and that goes through the wall to a flapped door dryer vent cover on the outside.

Something to keep in mind for others reading this thread: if you’re going to vent to a pre-existing pipe like this, you need to make sure there’s some kind of guard in place to prevent laser exhause backflow into the dryer / house.

In my case it’s not a pre-existing pipe. It’s one I’ve added for this purpose (in the garage, the dryer is in the basement but not where I’m putting the GF). I was just calling it what it was not implying I use the same pipe for multiple purposes. Here’s what it looks like: 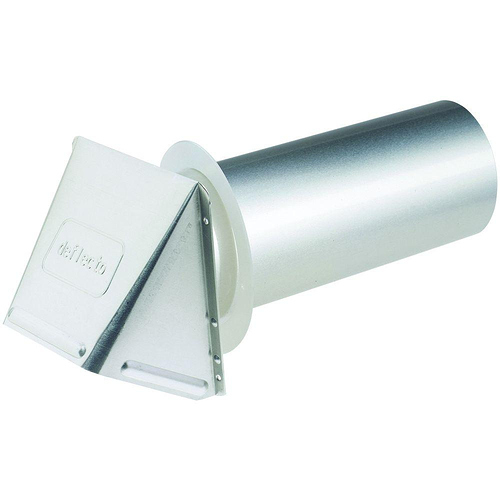 Ah, calling it a dryer vent on the inside appeared to me to mean that there was also a dryer attached on the inside, heh. I’ll leave the above for anyone else who gets confused, though.

The dryer vent (with flap) will help drafts be minimized, but you will get condensation in the flex tube since the room and GF

are close the the cold external connection.

Most dryers are far enough from the external vent that condensation is evaporated from within vent pipes or not accumulated. You might be able to wrap the vent tube/flex with an insulating material, but make sure the external vent is lower that the GF

to keep the condensation going downhill, if there is any.

That is a definitely something I’m looking at doing. Thank you for the idea. When the time comes I’ll post pictures of what I do.

I would be very interested in seeing the piece you make!

To be honest it will probably just be a piece of acrylic with a vent like the one @jamesdhatch posted above and foam around the outside to seal extra cold air from getting in when I close the window down on it.

This awesome. Most likely what I’ll end up doing. Thank you for posting this picture.

They make a ton of different types of dryer vent hoods - be they louvered, flapped, etc. Most any of those should work to keep the elements out.

I’m very glad I asked. Thank you for bringing that up to me, I definitely didn’t think about using something so useful.

Since I’m in Utah too this is something I should probably think about.

Hey Utah 'Forgers - I didn’t realize that there were more than about 3 of us!

I’m also planning to vent outside. I’m fortunate enough to have an overhang in my current home. We’re fixing to move house right after Christmas, though, so the custom Glowforge vent in my office will probably not get to actually vent a Laser.

Consider adding yourselves to the map:

Hey GlowForgers, I started a Google map so GlowForge supporters can share where they are and see where others are too! Edit: I started the map and included my referral link. I would really appreciate if the person who keeps editing my link...


(use a major intersection nearby to avoid guests

EDIT: @mspricethelibrarian I found you. It’s been a bit since I checked the map for neighbors.

Yes! I discovered the map recently and it was fun to see so many of us around! Users’ group?

I got a filter, but am hoping to vent outside on occasion.

I’ve never been in a useful user group before; but I bet we could come up with useful and fun.