Weather and the filter hose out the window

How hot is the GF exhaust? Because I’m thinking it would help if you could put a heat break at the end of the flex hose but before the part that goes out the window.

I vent my CCL through the shop roof, easily done, there’s no heat to speak of and pretty sure any wall/window variation of the same will work. Don’t expect the exhaust to keep itself clear of snow, it won’t. 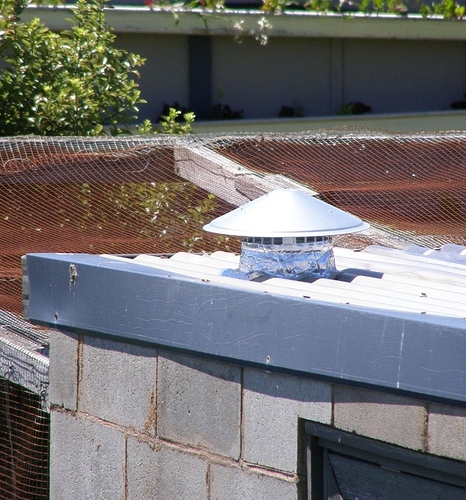 Now hurry and get approved for a pre-production unit so we can meet, will ya?

It would be my distinct pleasure!

These ideas are getting better and better. That makes a lot of sense. Perhaps when we get a house. I don’t think the apartement wants us messing with the roof. Thank you for the picture.

Seriously though. Someone get approved so we can all meet and oogle over the forge.

I also like the name. But seriously we should all keep a group going. Change the state of Utah one Glowforge at a time.

I mean, if one of the Utahns has to take one for the team…

I think Dan should take this one to heart and send us one out to Utah. We have a volunteer for tribute. @dan

I’ve been thinking about an inline blast gate. I do need a vent cover to shed water on the outside of mine. What I have designed but not cut yet is a simple way to mate the male window opening to female vent hose. It will be a two meeting plates as magnetic quick coupling so I can quickly remove hose and shove in a Styrofoam plug to keep wind/air out.

What concerns me more is that with the styrofoam in the Windows, there is no security in the house until I put a plate on the outside. Thinking about that issue.

What concerns me more is that with the styrofoam in the Windows, there is no security in the house until I put a plate on the outside.

First, there’s no real security with acrylic or even glass, let’s be honest

But if you use your blast gate and put a pin in it on the inside bottom by drilling a hole in the bottom frame, just don’t go all the way thru the outside frame, you can drop the gate and put the pin (10p nail?) into it and it’s not going to be slid up so a miscreant could stick his arm into the hole and reach around for a window latch or something.

First, there’s no real security with acrylic or even glass, let’s be honest

I sanded a piece of Lexan (polycarbonate) and put it in a garage (side door) window. It is unbreakable, lets light in and does not let anyone see what’s in my garage…good stuff. - Rich

True, that, however, thinking about the broken window theory of urban decay, a flimsy piece of Celotex at ground level is inviting investigation by the local hoodlums: the raccoons have been known to pull of siding on my house!

I sanded a piece of Lexan (polycarbonate) and put it in a garage (side door) window. It is unbreakable

But is the mounting unbreakable? Or will the frame give when the Lexan is kicked? Or is there another glass window near it that will break without even a kick?

I’m doing the Lexan in the basement window myself but only because I figure it’s a bit more proof against a rock being kicked up by the lawnmower.

But is the mounting unbreakable? Or will the frame give when the Lexan is kicked? Or is there another glass window near it that will break without even a kick?

I re-enforced the frame to match the .30 inch Lexan. No other windows around. The door cannot be opened either (still two exits from the garage). As good as I made it, any determined criminal can break into a house. They would be sorely disappointed in my house though (not much worth stealing) and I have security cameras.

any determined criminal can break into a house. They would be sorely disappointed in my house though

Plus a sign pointing to my neighbor - “Good stuff here”

Yeah, I love telling friends that go too far on “security” devices about my “universal key”. When they give me the look, I tell them I have a sawzall and can make a doorway anywhere on their house. It takes a second to sink in, but it does the trick. This honestly didn’t dawn on me until I was a carpenter for a few years and got into a company that did additions on existing houses. I watched a guy with a sawzall make a door sized hole in the side of a house in a matter of 3 minutes one time. Mind blown.

I don’t have definitive environmental #s yet, but as a general rule you’ll want to keep extreme temperatures & actual moisture out of it. A blast gate or flap or similar is a good idea.

Thank you Dan. It will be exciting to see what everyone does. And to see environmental numbers.