Not a vector at all, just a PNG image for engraving

Hmm weird. New to me, sorry.

the last two attempts have worked as expected when using masking.

I expect that potentially the clear glass was causing an issue with the auto-focus when the laser tries to see where the material is (although I don’t know why it worked partially). The masking you’re doing now is allowing the GF to “see” the material when it does the scan before the print prep step.

The most interesting part here, in my mind, is that my attempts to fix the “no print” problem resulted in an engrave that has a beautiful even white etch, which I’d been lead to believe wasn’t going to really happen with glass, only acrylic.

resulted in an engrave that has a beautiful even white etch, which I’d been lead to believe wasn’t going to really happen with glass, only acrylic.

Check to see if it washes away. It typically will because it’s only glass dust and not a stippled surface.

That’s really neat then. The LPI you were using or the engrave setting (did you do any dithering?) must have resulted in the stippling effect that makes frosted glass vs the fracturing that typically occurs on lasers.

That’s definitely a keeper method to use!

The first attempts using variable power engraves @100% fractured like you mention, leaving sharp edges on the bottom of the piece and an uneven engrave. Switched up my settings to use the dot pattern @ full power for 3 passes and masking the piece before engraving and I’m loving the results! The engrave isn’t as deep but it’s infinitely more desirable.

Found this thread that has similar settings for those exploring…
https://community.glowforge.com/t/salt-shaker-settings/10146

Yep - that’s the key. Using the dot pattern the laser pulses on & off so it’s still fracturing but just tiny little bits. That’s what the sand blasting and other frosted glass etching methods end up doing as well (technically those eat a crater into the surface either chemically or physically).

When the laser is doing a line (vector) based engrave/cut/score it’s got a continuous (although potentially variable) power beam. That creates long fractures instead of tiny craters.

How do you use the dot pattern. I have engraved before where it asks if you want to do dot or variable as an option but I went to do a simple test and it doesnt give me the option. For reference I am trying a simple text I created and saved as a pdf.

Shows up under the manual engrave and the greyscale setting

OK here is what shows for me. I have seen before where I can select the style of engraving but its not showing here. Am I missing something? 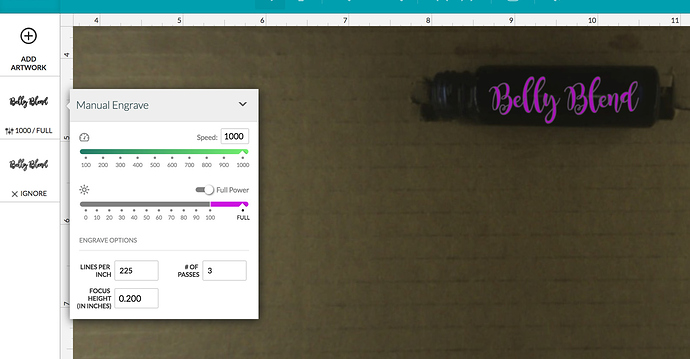 You need to use a raster image rather than a vector to get the full set of engrave options.

Good and bad. Rastering the image worked. I was able to select what type of engraving. Bad news is that my GF wont calibrate. Says to try to turn it off/on and/or contacting support. I just sent my email.

Well that sucks! Hopefully support can get back for you.

I’m sorry for the lack of response - I’ve been digging, and haven’t found a conclusive answer. Have you seen this again since? If so, do you know the date and time of the issue so I can add to the investigation?

Date and time is approximately the time of my posting and the day prior. Sorry I can’t be more specific. Since using painter’s tape to mask my glass engraves I haven’t seen the problem recur so I suspect that the 'forge was getting confused by the clear glass somehow.

Thanks for trying to figure out what happened.

Thanks @Jeff_Frank. I’m going to close this for now - please let us know if you see the issue again.