So in my standard production of “death frames” for my wife’s animal hospital, I crank through about 20 of these frames at a time. I have magnets on the bed and I just engrave, open, put a blank one in and hit print without changes. So bizarrely one of them did a partial engrave (ignoring all but 2 complete letters???) No idea how letters in their entirety got engraved and other letters got forgotten (this was the 14th in line so I know the file is good) 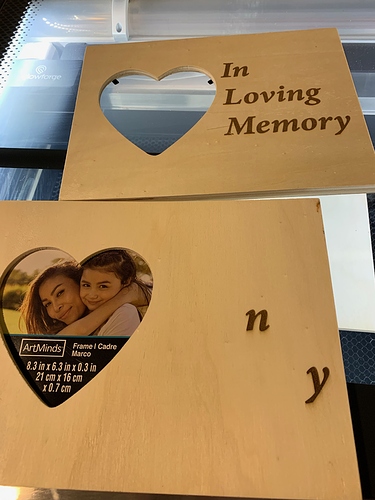 Note the magnets essentially serve as a jig so I don’t have to worry about placement. You can see one peaking out on the side

UPDATE: It did it a second time. I then reloaded the browser and the problem went away (just hit cmd-R and pressed print). Interestingly it took significantly longer to motion plan on the refreshed version, but it worked. So I am back in business, but if you could do a post-mortem exam of the logs to figure out the bug?

Thank you for letting us know about this. Did this print complete and have a post-print image load in the app, or did you cancel it by opening the lid before the image reloaded?

The second time I cancelled since I knew what I was seeing. The first time it completed with a post-job image

Thank you for your patience while we investigate this issue. Have you experienced this again?

I took a look at the logs for your Glowforge, and I believe that you pressed print while some of the pieces of the artwork had a gray outline. That gray outline indicates that they’re outside the printable area. In the future, move the pieces you want to print until they are brightly colored, and then press “Print” in the app.

I’m going to close this thread - if you have another question, go ahead and post a new topic.