Why an egg? Because it can

no. At this setting it only carved away a part of the shell, not cut through the shell. You can see in the illuminated egg the dark lines are the areas that were engraved.

I’m really curious about how you were able to do this.

Yes the crumb tray was removed, and I measured the thickness of the egg and jig to get the input setting. I used the highest point of the curve as the thickness

Thank you! Just knowing this little bit helps me confirm some hunches.

Why stick to hunches? There are many units in people’s hands and lots of people have tried things. Just ask and validate your thoughts? though maybe in a new thread.

Many years ago, I used to do hand engraving and sand etching on Emu and Ostrich eggs and I was wondering if the Glowforge could etch an egg…
I’m guessing that you used a chicken egg. I would try using the Ostrich or Emu egg as they are quite a bit larger and the shell is thicker.

This was a chicken egg. The only issue I can see with an ostrich or emu is the size. Even with the crumb tray removed you are limited in the height of the material. I assume that most of the emu eggs are greater than 2.5"

I assume that most of the emu eggs are greater than 2.5"

Yes, I think they’re usually around 3.5" in diameter. (Too bad. They have such a pretty color.)

You can get some pretty colorful hens eggs as well. And robins eggs would be nice.

And you can dye white eggs before blowing and lasering. (Might be the easiest method.).

Wow… thanks for listing your settings.

Can you share the full settings you used with this?

Did anyone ever try a hardboiled egg? I’d think the eggshell is tough enough to be safe to laser on with a non-food glowforge. Hmm

Thanks Dan. That yolk cracked me up.

Did anyone ever try a hardboiled egg?

Results from a peeled hardboiled egg. Glowforged the outer and yoke. 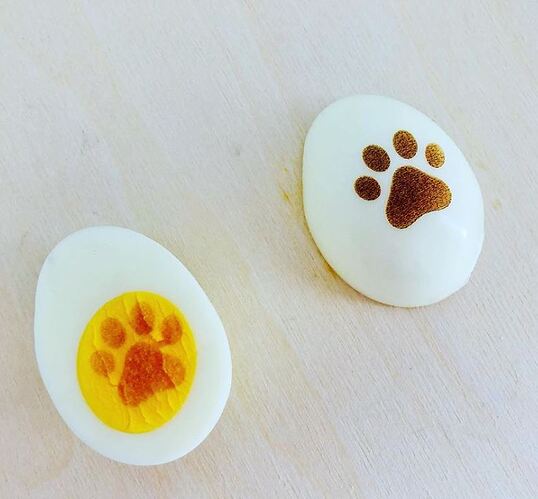