Yesterday was a very exciting day for me because I was finally going to receive my long awaited GF. Two years waiting and it was finally going to be here. I went home and waited by my window during the delivery window UPS stated. 30 mins were left and I found it odd that the truck had not passed by so I check my UPS my choice account. The status had changed to “first attempt made” and that the received was not home to receive the package. I immediately called UPS to file a complaint and state that the driver was lying because I am sitting there waiting. The customer service person said there was nothing they could do that it would be delivered again the next day. Fast forward to today. I call this morning again asking what is going to happen because I could not miss work again to receive the package. That i would only be available in the evening. I again restated that I was not happy because the driver lied the previos night and it was noted. It is 7pm and I was waiting for my package that never arrived. Why? When I checked the status update again I saw that 1 hour after I got off the phone with UPS my package had been damaged. I called the store from which it left and the person spoke to me like I was crazy stating that the package was on its way to my house and that he had no idea where I was getting the information from that it was being returned to sender. He even told me the time it was going to get to my house and that there were 10 more stops to go (another lie). 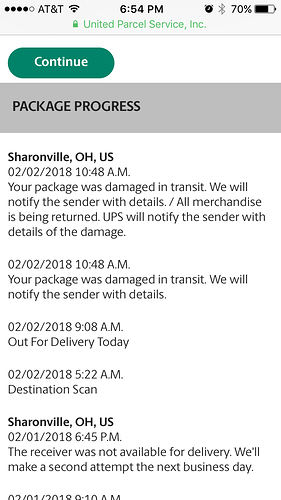 How convenient right? I file two complaint and all of a sudden my box is being returned to sender because it was damaged. I called the damage department and they read the report stating the box was crushed and cracked (those exact words) and had damaged corners.

Two years waiting for the GF that I would have had is the driver had not lied yesterday. Now who knows when I will actually get it.

I asked how I could report the workers that I dealt with and the UPS customer service person says I can’t. So pretty much UPS can damage your packages and you can’t do anything about it. Hope you all have better luck than me. And if possible just pick up your GF at the store and don’t have it delivered.

PS: Glowforge they stated that only you guys could file a claim and I really hope you hold them responsible and pay for the damages if in fact the printer itself was broken.

Hope everyone is having a better day! Happy printing everyone.

Total bummer for you. But if it turns out the unit really was damaged in transit, Glowforge has been very good about getting a replacement to you very quickly. This has happened to a number of people already.

Yup, they just contacted me and made my day a bit brighter with good news. Ugh I hope this doesn’t continue to happen to other people because it truly sucks.

It’s UPS so it will happen again. To be fair, though, I don’t know that FedEx would be any better.

Just a word of caution. I dont often see it mentioned, but having your UPS package held for pickup can add several days to your wait. Thats probably insignificant in the grabd scheme of waiting 2 years, but sitting around for 5 days waiting for my packages to go from one building to the one right next door, where I could get it, was brutal. And then when we picked them up They still had to look for them.

I’m not saying it’s not the safer choice or worth the wait or anything. Just that, if you’re anxious, be aware that disrupting their process by having them hold the packages can slow things down quite a bit.

I think it depends on where you have them hold it and when you tell them to do it. I changed mine too hold at hub as soon as the tracking number showed up. Also, I knew the hub that the box would travel through and had them hold it there rather than the one closer to me.

In my case I picked it up the morning of the day they would have delivered by end of day. So I actually got it 5 or 6 hours earlier than I would have.

In my case I picked it up the morning of the day they would have delivered by end of day. So I actually got it 5 or 6 hours earlier than I would have.

Also the same.
According to the tracking it arrived at the depot on Sunday morning around 6 AM, so it would have been delivered sometime on Monday.
Was there smiling at them when they opened the door.

I’m so sorry that our shipper damaged your Glowforge and we’re working hard to replace your unit.
We’ve followed up in email with next steps, so I’m going to close this topic.