I’ve recently started to get an “Alert Cooling” message every time I turn on the laser/run a job. I do live in South Texas and I know it’s starting to warm up, however I keep my house at a reasonable temperature when I’m operating the laser (approx. 72 degrees) and I keep two different fans blowing near the GF as well. The window that I’m ducting through has thick faux wood blinds and is well insulated.

I noticed this started happening about 3 weeks ago when I had engraved several long engravings (about 6 hours of laser time altogether) and ever since that day, it has given me the cooling error. Prior to that day, I had run the laser for longer periods and during hotter days without ever seeing the Cooling alert. Is there something I can diagnose to make sure it isn’t a separate issue?

Please help, at this point I can only get through one job per day (if that) before it stays in the Alert Cooling mode (with the solid yellow light). We are going to have temperatures in the 50’s over the next few nights, I will continue to test in the cold temps.

Thanks in advance for any suggestions.

Are you running a pro or basic? Your ambient is below the threshold for both but obviously closer to the Basic threshold.

First thing I would check is for adequate airflow for both intake and exhaust. Make sure nothing is blocking the intake port (front bottom right of machine - approximately inline with the button, but on the bottom side). That intake fan likes to suck all kinds of things under the Glowforge - pens, paper, etc.

As for the exhaust, that fan not pushing the air out it needs to could cause a rise in operating temps. I cleaned mine the other day using a vacuum hose attachment and some pipe cleaners. Worked pretty well.

Another consideration may be some of that hot air coming back into the machine via the exhaust vent.

(I’m just up the road between SA and Austin, so I hear you loud and clear on the temps!)

I’ve been experiencing the same behavior in Seattle where it was snowing last week. I have a support case open and Glowforge is investigating logs from my Glowforge Pro. I measured the ambient temperature every minute as jobs were running and the room was between 65-71 degrees Fahrenheit.

Yeahhh, I just did a little forum digging after I posted and saw the suggestion for the intake. Going to check it out here in about an hour or so to make sure I don’t have any blockage. I did remove the exhaust duct and blew it out/cleaned the GF exhaust port. It was a bit dirty, but honestly most of my engravings have been slate and haven’t really created much of a mess.

You’re in Wimberley right? My folks just moved up to New Braunfels, actually closer to Canyon Lake off 306. I’ve been following your puzzle posts/progress and think they’re awesome. We should grab a beer sometime and talk about all things Glowforge!

Please let me know if they’re able to figure anything out. Would love to get up and running again. Feel like I’ve lost an old friend!

I don’t want to cause panic, but I saw a post from someone whose glowforge gave the same message and they sent him a new one. It sounded like his wouldn’t even do a single job, but IDK for sure.

According to the post office, at least. I’m probably the last or second to last house in “city limits”. I’m actually closer to the north side of the lake than to town. Probably temporarily flooded in, in either direction right now though haha.

Not sure of your exhaust set up, but if it’s hot air intruding back in, a small booster fan could help. Or a louvred exit.

If you have a meat thermometer or something, you could stick that down by the intake to see what kind of air temps you’re pulling in. Sometimes (probably more often than not) you’ll see hot spots in rooms. I have some spots in different rooms that will be 3-4 degrees warmer.

@scott.wiederhold do the temp sensor readings show up in the log downloads? I’d imagine so. If nothing else, might be interesting to look at.

The tough thing on the basic is that it won’t cool below ambient. So if you’re right on that threshold, or in a hot spot of the room, you’ll sit there spinning your wheels.

Man, Wimberley floods are no joke… hope everyone’s safe out there. I do have a louvered exit on my setup but I like the meat thermometer idea. I’ll be experimenting with it tonight for sure. I was really hoping I wouldn’t have to get a separate window unit in order to run the GF during the summer, however that may be my last resort.

Really wishing I sprung for that Pro a couple years ago, seems like it’d alleviate several of my headaches. Thanks again for the information though, I’ll do a bit more poking and prodding tonight and report back.

There’s no direct sun landing on it is there? That would cause the interior to heat up.

@scott.wiederhold do the temp sensor readings show up in the log downloads? I’d imagine so. If nothing else, might be interesting to look at.

It does, though only after a completed cut:

No sir, it’s on the shaded side of the house and I keep those wood blinds closed at all times. I also have dark curtains covering them as well.

That’s bummer - would have been an easy solution

Others have had that issue and been able to resolve it by closing the blinds.

Sorry it wasn’t your solution. Back to GF Support

I turned off my machine for a couple of days just to be sure that it wasn’t a thermal issue. When I powered on my Glowforge Pro this evening and re-attempted a print, it failed within a few seconds with a glowing orange light and a message in the app that my machine was calibrating - even though it was doing nothing. I powered off the machine, moved the head to the center, turned it back on and re-attempted the print. This time it failed in approximately 20 seconds with another glowing orange light.

Not sure if this is the same issue as you, but you can see a video of my machine’s behavior here:

I’ve responded back to Glowforge support and have asked them to take a closer look at the logs as this is definitely not a thermal problem - or at least a normal thermal problem that I can resolve myself.

Alright, so I did some testing tonight and it looks like I’m still stuck in the mud. First off, I waited until 9:30pm to crank up the GF since I knew it would be a cool night and the ambient temperature in my house would be around 72 degrees. I checked the intake for any sort of blockage - negative. Upon start-up, I’m able to calibrate, however as soon as I try to run my first test (which is literally a ten second score in order to help with alignment) I receive the message I’ve become accustomed to: 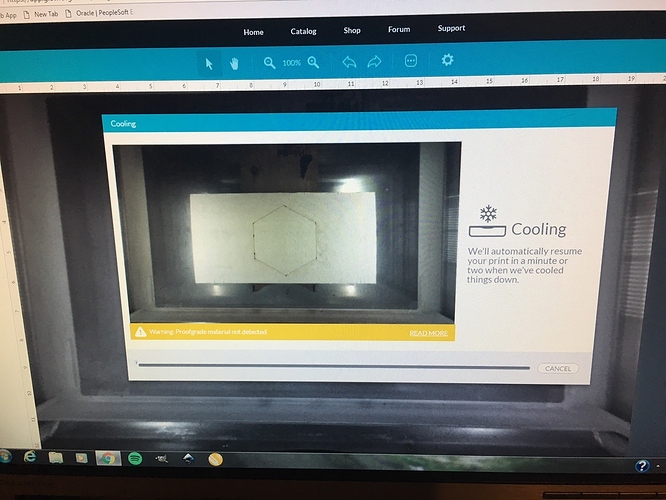 I have received this message upon startup every time for the past 3 weeks. It usually goes away after about 10-15 seconds so that I can run my first job. Tonight I was able to run a 17 minute engraving on some marble, here is the video:

Immediately after this engraving, I entered the Alert Cooling mode and could not continue printing. I re-inserted the crumb tray and turned the GF off for 30 minutes. Turned it back on and was able to run a quick 10 second score, only to return to the Alert Cooling mode asap. Here is a video of my probe thermometer placed underneath the GF whilst stuck in the AC mode:

I apologize for the shotty cinematography, just hope this gives some insight into my issue. If there is a better place for me to check the temperature with the meat probe, please let me know. This is beyond frustrating. Hoping @Rita or someone with the support team is able to reach out soon.

Thanks all for the help.

Have you checked to see that the exhaust is not blocked in any way? Nothing fell in front of it outside or anything? Nothing underneath the right side of the machine under the edge blocking the intake?

You can try pointing a fan at the intake on the right side of the machine and see if it moves some cool air in there.

If you are etching on a lot of tile - is it creating a lot of dust? If so, I’d try applying a vacuum cleaner with a brush on it to the back of the exhaust fan to make sure it’s not clogged up and moving freely. If that grid gets clogged it will block the air flow and overheat the machine more quickly.

(And i apologize if this has already been suggested - I just caught the latest post.)

I’ve got two fans on the intake side (nothing blocking either intake or exhaust). 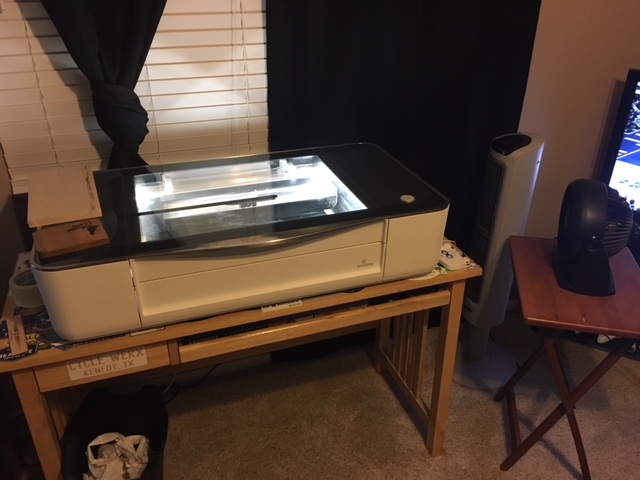 It’s nice and cool in the room with all of this air circulation and the probe thermometer is currently reading 74.2. I know I’m close to the threshold so maybe I’m too close for comfort?

If there is a better place for me to check the temperature with the meat probe,

Since the jobs completed, you could log into the forge and download the logs and check the reported coolant temps. I’m sure it’s frustrating

seems like either running hot or thinking it’s running hot which could be a few things but no reason for me to speculate. Either way, they’ll get ya taken care of.

Edit to add: is it possible to bump the air down a few degrees temporarily to test that end of it?

Only thing left to check if you haven’t done it is to remove the exhaust hose and check that grill over the exhaust fan - they can clog up solid if you cut a lot of draftboard or do a lot of heavy engraving.

Is there an instruction manual out there to teach me how to log in and download the logs?

Here’s a link with a couple of links:

Add me to the "Needs Calibrated" list Problems and Support

You can follow the instructions here to download a copy of the logs stored on your machine. You can cruise those and see if anything jumps out. There are some details on interpreting them here and here.