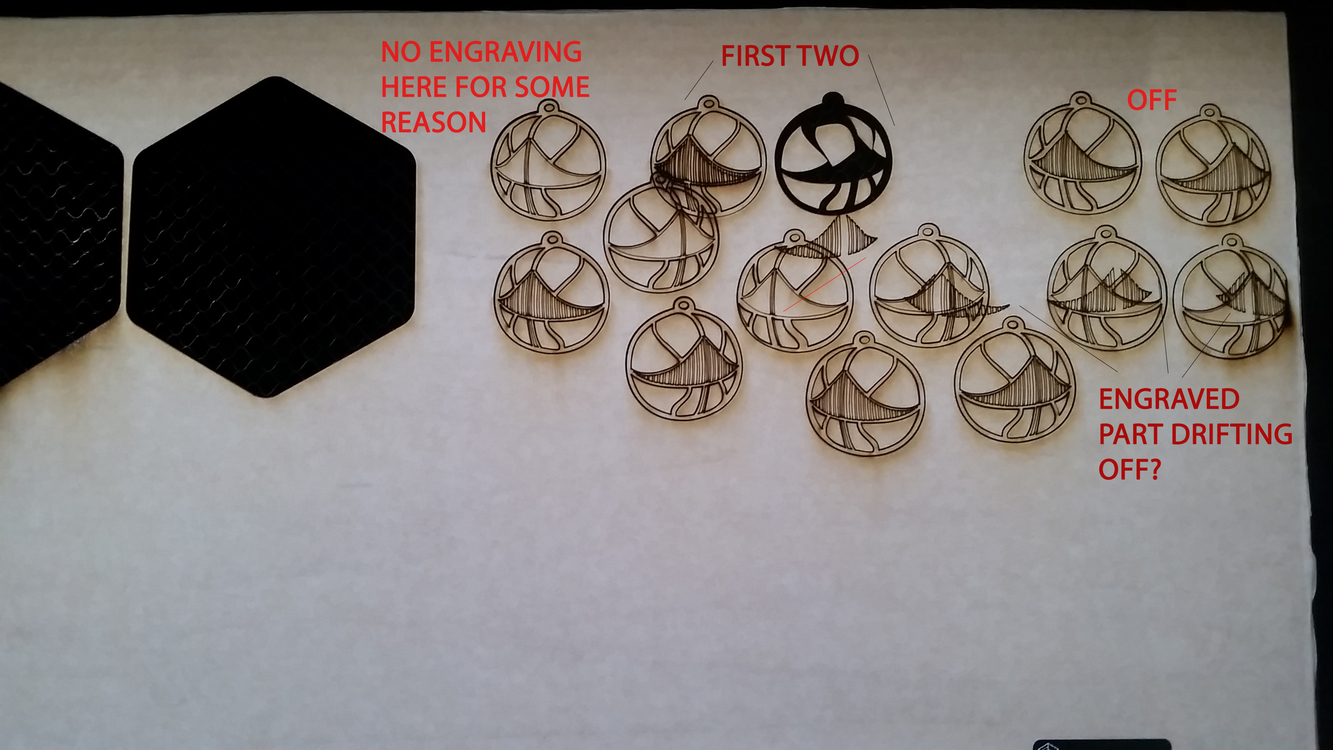 I saw the post about alignment software update and some issues folks are having with the head calibration, but I haven’t seen anyone talk about the issues I just experienced (please forgive if I missed it somewhere).
I tried to add two little Warrior earrings next to the previously cut hexagons (“FIRST TWO”) and they ended up printing about 2" away from the hexagons rather than 1/4" the camera / layout showed.
Ok. I really wanted to print 4 more sets so I added six to the layout in case one or two unpredictably overlapped with existing cuts. Who knows, maybe they’d actually be cut near to where they were laid out.
Well, this run was also inches away from where the camera / layout said it should be. What I was not expecting was the engraving to drift so far off from the cuts of each duplicate piece. Strange, non? I think the cuts themselves got a little weird by the far right because the head was limited by the edge and wasn’t expecting such a thing but the whole file has me puzzled.
I like to start with a test cut before adding more to my design, but it seems my glowforge doesn’t want me to reuse the rest of the material. Is anyone else having such severe drifts, both with initial alignment compare to the camera visual AND within the way the laser cuts / engraves parts of the file?
I guess I should also say that I could not get the gf to recognize Proofgrade Maple Plywood either. I cleaned the camera and restarted several times. No dice.

Were the severely misplaced engraves copy and pasted elements by chance? Or, were they just dragged and dropped from the original import?

I think there’s been a spate of issues lately where the laser head is further to the right than the software thinks. Here’s another example where something similar happened…

Annoying failure just now. I was cutting some 1/4" acrylic from inventables, and cut lines that should not have overlapped… did. Motion-plan preview looked fine, file looks fine to me. Went back to the GFUI, rotated the image 180° and tried it again. Worked fine the second time. But… why did it fail the first time? It didn’t get bumped. The air assist did not move the acrylic. I wasted a 3"x9" section of 1/4" red acrylic (would have been more, but I can salvage part of it). What can I d…

I think I saw another one, if I remember any of the details about it I’ll search for it and post a link.

Apparently, sometimes the X axis (the gantry) is so far out of alignment with the case that it causes the head to make contact with the front of the enclosure during normal operation. This friction can cause steps (and therefore positioning) to be lost.

Had you cut anything toward the front of the machine since the last time it had been “calibrated”?

Some possibilities people have reported causing similar issues include:

The first set of two came in as a single file and were placed what I thought was next two the hexagonal shapes cut earlier that day. They were cut 2" to the right. The next batch were copied and pasted and were also off set but then engraved elements were also not aligned with cut elements.

I started the machine, it calibrated. I then cut the three hexagons to the left. No problem. Well, apart from it not recognizing brand new Proofgrade materials.
Close app and add new file with two would-be-earrings. Set them next to hexagons and they cut 2" over… Now I am a bit curious and cut and paste multiple copies near this pair and even the engraving gets out of alignment.
I was hoping to add something to the back of those inital hexagons but I have no idea where the laser will be relative to the image. It does seem to think it is further left than it actually is but I’m not sure what is happening with the engraving vs. cutting.
Maybe it just needs a time out.

Did you perhaps move the head or gantry between the cuts?

I would power cycle, and perhaps reboot the Glowforge before trying another operation.

Tape some cardboard down on the bed. Have your design file with the art placed inside the shape of the hexagon. Ignore the design but cut the cardboard out. Remove cardboard. Drop in the coaster and then engrave your design.

That is a work around for an issue that should not occur, though. I can see slight misalignment, but a) not this much, and b) not within the same job (different actions, but same job)

Sorry. The quote wasn’t placed right. I was just thinking of the coaster. You are absolutely right about the earrings. That alignment and placement of the print is not within specs and needs an explanation.

Hmmm, I might have tapped it when the camera wasn’t recognizing the proofgrade materials.

I appreciate the work around anyway and will keep it in my arsenal as other things arise. Thank you!

The Glowforge uses dead reckoning to know where the head is at all times. But it can only do that if the head is only moved under command of the computer.

If you move the head manually when it is on, the computer has no knowledge of this movement. This will make placement off by however much the head was moved…and if later motion plans cause the head to reach the physical limits, it will also cause distortions.

You should only move the head (or gantry) manually when the power is off.

If you notice any alignment anomaly, it’s good to power cycle the Glowforge so it will calibrate again.

So I was away from my GF but eager to return and start over. Today, I fired her up only to find that she’s stuck in calibration mode with the head vibrating off to the left every 30 seconds or so…for 20 minutes! I restarted and same thing. What now?

Do you have any material on the tray? Sometimes that confuses the camera. If you do, I would cut the GF off, remove the material, then turn it on again.

Alternatively, you could leave the material on the tray and just move the head under the camera (with the GF off, of course).

I did have material in there. Took it out and restarted. Now the head is all the way to the right and instead of trying to jump on the x axis, the whole carriage is moving about an inch back and forth on the y axis.
I had hope for a minute! Any other ideas?

What is the difference between power cycle and reboot?

Wait!! I also had to clear what was on the app layout and it seems to be ready now to take next step. Wish me luck with the refire!

reboot by holding the start button down for ten seconds until it turns teal, then turn off the machine

I think when you just power cycle it, it restarts to a state it believes is a known good state. However, sometimes that is not quite accurate. It’s kind of like sleeping or hibernating a laptop. It can restart fastest from sleep, faster from hibernate, but a true reboot is sometimes required to clear up state.

I’m sure @scott.wiederhold can go into more detail if you want it.

What is the difference between power cycle and reboot?

There is no difference. They are two different terms for the exact same process.
@johnse is referencing @jules describing the WiFi connection procedure.