Anyone know how to fix this font issue?

Added some text to a bamboo cutting board tonight. The overall result was good with the exception of how the machine interpreted the location of where the letters of the text overlapped onto another letter. It didn’t engrave two areas of the text on the board. You can see this in the images below where the “G” crosses the “A” and the “G” crosses the “H”. Anyone know how to fix this in Illustrator? 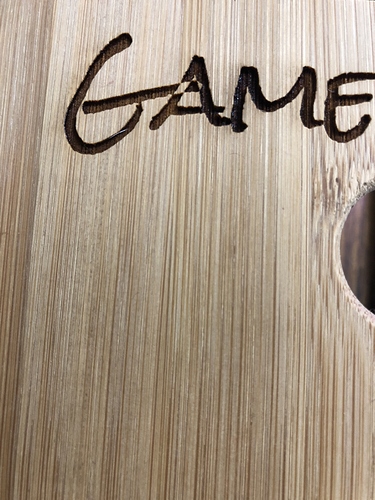 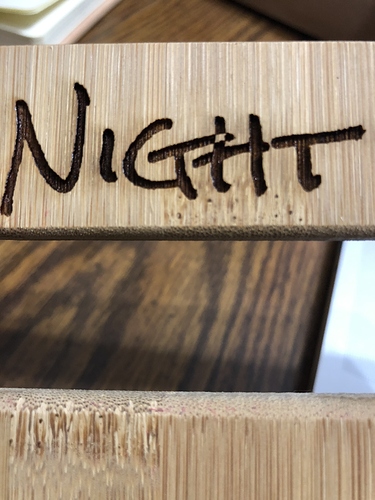 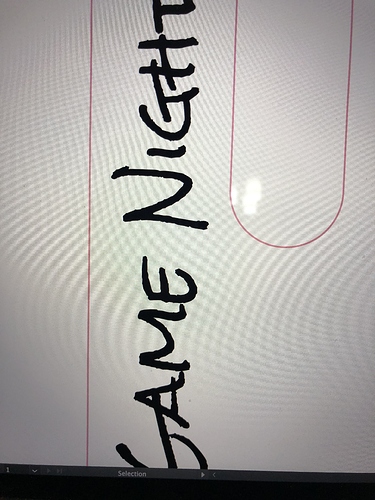 The easiest solution is to rasterize the text.

I’m not an AI user (Corel Draw and Inkscape, mostly) and, I am sure one will be along to provide a more precise answer shortly but, since it is late:

You likely want to convert the text to a path then merge the overlapping objects. This might also be called something like unite or union, IIRC (it’s “Weld” in Corel Draw). You can probably get a better tutorial by searching on those terms on the forum or, with Google or YouTube.

P.S. – “Pathfinder” might also be a relevant term here.

I wouldn’t save it to a different file. Just convert it to a bitmap within the SVG. I don’t know the Illustrator command for it. (in Affinity Designer it’s Layer->Rasterize)

Yeah. I wouldn’t abandon the original raster version, just “export” or “save as” or whatever is appropriate for AI.

No, I wouldn’t export. It looks like the original file has cut lines. I’d just rasterize the text and leave it in the SVG so it doesn’t get separated from the cut lines.

Makes sense. I wasn’t paying any attention to the rest of the design shown in the last image.

Selecting the outlines and merging them from the Pathfinder window did the trick. Thanks for pointing me in the right direction, much appreciated.

Yep, that’s the solution! Next time, be sure to view your project in outline mode before you take it to the Glowforge—those sorts of issues really stand out in outline mode and fixing them at that point will save you a lot of grief (and material).

I’m with @tim1724. I prefer to rasterize anything that’s going to be engraved. No reason to take chances with whatever Glowforge uses on their backend. They’re made it much faster now, but it still has rendering errors like this.

In Illustrator, at least, you can apply it as a filter so it’s non destructive.

True, but I just see that as secondary to the original problem. If he decides to score instead of engraving he still has the problem, so an understanding of what caused it is useful.

Fair enough. Merging paths is a critical skill for using these machines.

If he decides to score instead

Sometimes, I’ll score after an engrave to get a cleaner look around a graphic. Honestly, I should probably rasterize more than I do for complex patterns, but I just use the pathfinder tools in illustrator. Glad you figured it out.

Vote one for combining path. I’m just an antiraster guy I guess. Mainly because of sizing and resolution facility through various outputs.

In AD select your curves, right click, geometry, add [image] [image] That should do the trick.

Just the same. I left the curves filled this time, and changed the color of the inner letter for illustrative purposes [image] [image] It combined them into a single curves layer [image] in outline: [image] (got tired of using black

) It’s still a vector so can resize, recolor, etc. easily.