I’ve had my Glowforge a couple of weeks now. I did some “tutorial” projects that came out well, and experimented with engraving some laser-safe rubber stamp sheets to make custom stamps for my wife… that’s the topic of another post.

But I wanted to make it more interesting. So I went looking for an interesting pattern for the interior. I found some code floating around the internet (written in Perl, of all things!) to generate random lattice work (by generating a point field, and then generating a Voronoi diagram from it, and thickening the resulting lines).

I had to mod up the code a bit to generate a circular bounding for the Voronoi diagram, and that took a while since I hadn’t written Perl for a decade. I took the resulting shape into inkscape, added an outside circle, score line, and some text, and cut the result on PG Maple plywood. It came out great!

For a second swing, I wrote some new code that generates hexes and put them through the same bounding code, and built another template with a hex infill instead of the random lattice infill.

I’m happy with how these came out. I didn’t expect to be writing Perl to generate shapes for my Glowforge; who knew? 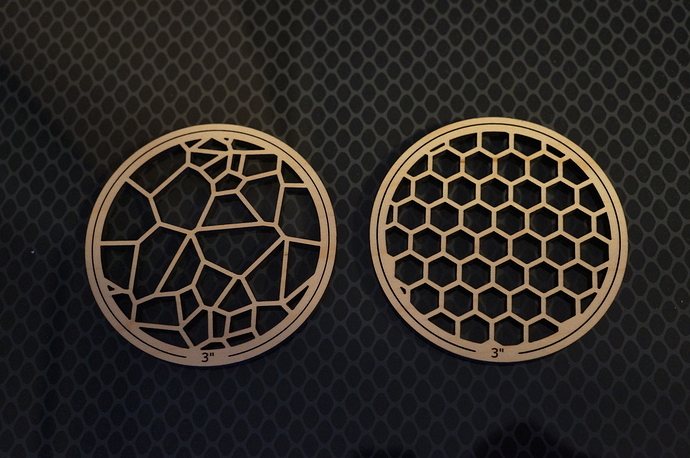 Nice! Reminds me of some of the tesselations people have been posting about.

Nice work! If you need something a bit more utilitarian or versatile for 1”::5’ standard scale, I posted these a while back:

Ignore the fingerprints Made on a Glowforge

D&D area of effect templates, either you need and want these or you are like “what?” [image] [image] Dusty and covered in fingerprints but I was in a hurry

You do know of course that Inkscape generates its own Voronoi patterns in the built in pattern maker. I am not sure as yet what Glowforge will do with a pattern but Inkscape has quite a powerful capability that a Voronoi pattern is what happens if you do nothing else with it.

It is a Voronoi generated in a square area, and then clipped to circle (actually a 200-gon)

@rbtdanforth I didn’t mess with Inkscape’s built-in pattern maker much, but I assumed it could make a Voronoi pattern, and probably a hex pattern. Call it code for code’s sake

The code I started with (which generated the Voronoi pattern), and the code I wrote from scratch (which generated the hex pattern) both have the property that the cells are generated as complete closed polygons, which is useful for generating the offset that generates the linewidth, and also necessary for clipping the boundary to another shape. I don’t know if Inkscape can do this with the Voronoi Pattern, but I couldn’t figure out how to get that extension to generate separate cells. I’ll probably mess around with it more in Inkscape, but it was for sure a fun exercise, especially to figure out the hex math. I didn’t figure out the Voronoi math; the code I started with was just using a Perl module to generate the cells from a randomized set of points as input.

I’ve tinkered with Inkscape for quite a long time. I have another laser cutter, one of the cheap blue boxes imported from China, and I replaced the controller board with a SmoothieBoard on it. After that mod, Inkscape with GCodeTools was the only tool chain I had for it until I started using and then working on LaserWeb3. Having said that, there is still a lot for me to learn in Inkscape!

I noticed that the patterns generated in Inkscape were image only and would probably be received by the GFUI as a raster, but as a fill, it, of course, reads like any other fill matching the shape of the object and thus clipped I tried to make the pattern back to objects with no success but exported as a png and brought back Inkscape should have no trouble making an outline of that and those would be closed polygons for cutting.

I totally get the exercise part, even more so, as a jump off to really exotic that nothing else will do. I played in LISP a lot in Autocad and often did in seconds what would take hours the ordinary way or be impossible at all.

Ok, so I have no idea what Pearl is, other than my Mom’s best friend. And, I’ve heard of GitHub and ASCII, but likely a place on my computer that I should steer clear of. But… this thread reminded me of something I noticed yesterday on this https://www.evilmadscientist.com/2012/stipplegen2/

Stipplegen converts photos to dots, I know, not the same thing. But… it also does TSP. It referred to that as a Traveling Salesman Path. Not sure if that’s the real name, but it’s the continuous path from dot to dot and can be exported as an SVG. It looks a little like the circle on the left but not intersecting. And, you don’t need to know my Mom’s friend Pearl.

@rpratt Perl is a computer programming language, one that can make quick work of many tasks, but is difficult to read, even for programmers. Pearl sounds lovely

Good eye on Stipplegen… I went and had a look at it, and it is using the same math I used to generate the random-looking lattice. It looks like a super-cool program; thanks for the tip!

Stipplegen and the rasterbator and halftones in general have been covered elsewhere:

Converting to halftone with stipplegen Made on a Glowforge

Was looking at some of the big oversized halftone dot prints done with CNC routers and was wondering about how that would look on the GF. Ran a picture through a program called stipplegen and did a 7x7 test print. At this scale, the larger dots are about 2mm. [image] Now I’m wondering how this would look at 4-5 times this size.

Provide halftones directly Beyond the Manual

Hi support: I have used the convert to dots option to build a silkscreen It was OK but I’d like more control over it How can I provide my own dot pattern? A vector set of points? A high res image of dots on 3D burn mode?

Anyone know how to create the pictured halftone-like effect? Everything Else

The other day I saw a fence that used holes of various sizes to render an image. It was a neat effect. Any ideas on how to turn a normal bitmap image into a bazillion vector cuts? [image]

Beta Project: Halftone Pattern Engraving Made on a Glowforge

I made some more engravings… This time I used halftone dot patterns to engrave photographic imagery. You can create halftone patterns of images in Illustrator and Photoshop, though it may take some time and perhaps some trial and error. I’ve done that before, but opted to use this cool site I found: https://halftonepro.com/ With a paid membership you can export unwatermarked images in either rasterized .png format or vector files as .svg.

Here are some of the results! 01 with maski…

Another technique which will translate easily to laser operations http://makezine.com/2015/12/27/create-stunning-illuminated-art-rasterbated-images/

… and more. Search around, it’s a pretty well-discussed idea.

What minis game are you making 3" templates for? I’m getting mine sometime mid march and have plans for making a ton of Guild Ball condition tokens and accessories.

It referred to that as a Traveling Salesman Path.

The Traveling Salesman Problem is a classic computer science assignment for beginning artificial intelligence. Basically, find the shortest route between a set of points without passing through any point twice.

The Traveling Salesman Problem is a classic computer science assignment for beginning artificial intelligence. Basically, find the shortest route between a set of points without passing through any point twice.

I suppose starting with a Hilbert curve and working backwards would not be on the list?

When I went to Drexel they were still using punch cards. And fortunately architecture didn’t require a computer at that time.

These are for Warmachine and Hordes (which we elide to “Warmahordes”). Many of my “minis buddies” play a lot of Guildball; I’ve only played a demo game.

I don’t know if you are familiar with Warmachine, but there are a bunch of common templates: 3, 4, and 5 inch area of effect, measuring keys for 1/2, 1, and 2 inches, and 30/40/50mm base proxies and precision movement templates are all super-common. I’ve been 3D printing a bunch of these for my gaming group; I’m (hopefully) switching to some new designs in hardwood. The funny part is I hardly play right now; I traded most of my minis time for playing hockey. Haven’t figured out what I’m going to laser for hockey yet

That sounds cool! They are vulcanized rubber – I imagine it would work, probably with an extraordinary smell

Also, and this is too late for me, if I had purchased a Pro model, I could use the pass-through to engrave stick handles. Next machine, if there is a next machine.