Alignment question here: I thought I have read all the alignment posts, and I thought I had it all figured out. To make this piece print, I had to make each part of the artwork a different operation, because the GF can’t handle it 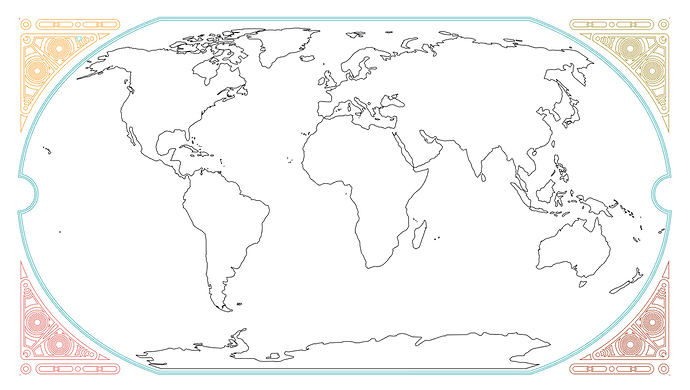 I have a special operation, 4 dots, one in each corners, to carefully calibrate and overcome the GF’s all-over-the-board-alignment issues.

Once it’s all aligned and where I want it, I start the print, but of course, I have to “ignore” several operations, just doing one at a time. But in between operations, I never move the material, never shift the artwork, never close my browser, never touch anything. And then, into my second operation: 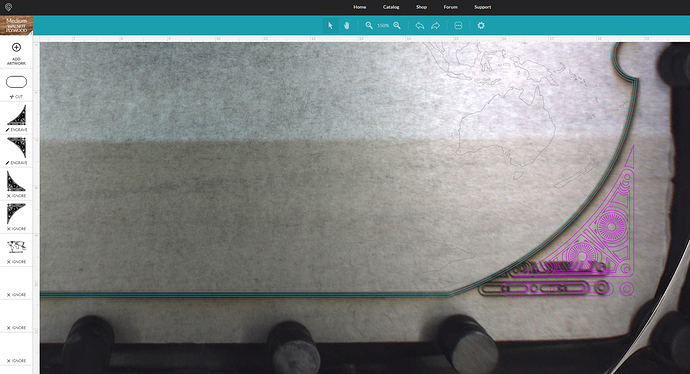 What!? Look how far off that is! Another sheet of PG ruined, an I thought I was being so careful.

I know there are enough nay-sayers and negativity in the forums , and I really don’t want to add to it. I’ve just failed on many more projects than I have succeeded. I have ruined so many pieces of PG without getting better at this. It’s kind of demoralizing.

I guess my questions is, how the heck do I print this project? Do I need to do a bunch of alignment dots for each operation? That seems so crazy.

Your piece looks held down pretty well - so doesn’t look like it moved.

Everything in your design will stay relative to one another as long as you aren’t moving design components around. If you’re trying to align components in the UI, you’re going to have alignment issues because the alignment discrepancy will vary depending on where on the bed you place it.

If you’re completely aligned in the file how you want it, and just turning on/off operations, you don’t even need the alignment dots?

Are you aligning it in the UI or do you have a source file that is completely aligned? If it were me I’d align it in my source file and never do anything in the ui.

Aw, that’s frustrating. Could you elaborate on what the “alignment dots” are for? Like @evansd2 said, I wouldn’t use the bed image in the GFUI to do any aligning that had to be precise. I’m having a hard time figuring out what the dots are for if you’re not using the bed image.

@evansd2 @orozcodoor @jbmanning5 - Yeah, sorry, I should explain the dots.

Everything is lined up perfectly in the file, as in the image I showed above. It all comes in together in separated operations (SVG) and I use the dots as follows:

As their own operation, I press ignore on everything else, and just burn those dots - they’re tiny and barely make a mark on the surface of the wood, just enough for me to see where they fall on the big piece of wood (Since in this case, I’m not cutting an entire image out of the sheet, just using the sheet itself as the borders of the work - so I want the whole of the image, all operations together, centerned on the PG Sheet). I see where the dots land, and in the GFUI, adjust the location of everything together, reburn the dots again, repeat, until the dots are more or less where I want them. Then, I “ignore” the dots operation and get to burning the other operations, which are all now in a location where they should compensate for the alignment problems of the GF.

Except in this case, I did the first operation (the ovals that seem aligned in the image above) and then once they were done, made them “ignore” and set to the second operation, nothing moved, nothing changed, and yet they ate into the design in the wrong location.

As long as the dots fall on the material, everything else will also, since they are inside the dots. Just burn them once and don’t move anything again. The other parts will fall perfectly aligned with each other inside of the dots.

(Does that make sense? Just don’t ever shift anything on the screen once you start the operation.)

That’s exactly what I did - I think it was one of your posts that got me using this method.

I guess I don’t understand exactly the thought process behind it all.

You have one piece of material right?

You have one design broken up into different operations (by color)?

You have an entire design where everything is aligned?

Are you trying to make the design hit on a very specific spot of your material?

Everything in the design will stay aligned to one another. If you want to move it to another area, just drag a big selection box, or cheat and control (or command/mac) - A to select all and move everything wherever you want it. The overall design alignment may be off by 1/4" but the design components will stay exactly where they need to be relative to one another.

Or, is this a design larger than the bed and you are using passthrough or shifting material?

See my reply above: This was my exact thought process, but in this case, it didn’t work out that way.

If I were going to do this… and it’s a big if because really I would always cut an outer rectangle and thus have no issues, I would instead carefully mark the very center of the pg board with an X that would match the svg in the dead center. Then I’d ignore the X in the svg and burn away. Your alignment would then be locked in on the most accurate part of the camera’s image. That being said burning the outer rectangle would always yield better results.

Shouldn’t have happened then… how tall are those magnets? I’m wondering if they had an effect on the head?

(try taking those off and run it on the back of that sheet…no magnets.)

There have been one or two instances where prints in the lower right front area of the bed got out of whack, but it’s a random thing, and doesn’t seem to repeat. I’d try it without the magnets first and see if it works. If you still have a problem with that corner, you might need to scale it down or there might be an issue with the machine. (Can’t remember right now what the outcome was on the lower right corner thing.)

Before you run it on the back of the sheet, why dont you try another corner first and see how that lines up. Because weren’t some others having issues with the lower corners? Maybe try the upper right corner and see how it aligns.

Yeah, and i was adding that while you were responding. It’s something else to check.

Thanks for this, trying it now. The magnets looks a lot bigger in the lid camera than they are in reality due to the fisheye effect, but it’s a good thought, I’ve removed most of them and I’ll retry it on the back.

I would personally just get a ruler and mark a physical reference on the wood (or put a little piece of tape and mark on top of that) - you have to have something to align your dot to, right? Let’s put it at the top left of your design. Load it into the Glowforge. Set everything to ignore except your alignment dot. Control-A so you are moving everything (even stuff that’s ignored will be grabbed) and align where you think it oughta be. If it’s off, make sure you are moving EVERYTHING and try again. As long as your wood is loaded square, one alignment dot is all you need.

The key is that you have to move everything in the design together. Once you have one alignment dot hitting, all of the rest are going to be hitting anyways (as long as everything is square).

So I flipped the piece over and tried it again - I didn’t think I could salvage the piece because of some cuts made on the alternate side, but they don’t show much.

Good news: I don’t think this specific alignment thing happened again, it must have been a fluke, the lower corner issue mentioned by a a couple people. I bundled the operation with another to discourage it, too - I’m not sure this is what helped, and perhaps I shouldn’t have mixed variables when testing the problem, but I only have so much material to laser!

Unfortunately, I encountered the infinite “Scanning your materials” glitch after my second operation. I thought had waited long enough before pressing go on the next operation (I’ve heard clicking print too soon causes this) but I was mistaken. So then, of course, I needed to realign everything - didn’t nail it exactly, and then after 2 more operations, I had the Chrome browser “OOPS” crash, and had to do it again. I’m seeing chrome pushed an update recently, maybe it will help, who knows.

While many others have much more time on their machines than I, I’m finding that “bigger” projects like this, with multiple operations, can be so risky. I find myself praying and praying and always getting excited and always being let down. Been checking glowforge almost daily, praying for them to push an update through to help with some of these issues.

very cool design, it sucks that the software is letting you down. I honestly haven’t tried any big designs for just reasons like this. Kudos for do it though.

First image is the lower right corner where people are reporting that their machines hit and cause alignment problems so I would think that is what you had happen to you.

Yuuup. Every instance I’ve seen of this, it has always occurred in the lower right corner. I know @jbv has experienced this, and I have lost a couple sheets of material to it as well. I just stay out of that corner if possible.

Do you have a Pro with shields installed?