So, yet another word-clock design. This time, it is fairly huge. The length is just over 28 inches long, which means I used the passthrough for several parts. This takes 4 of the 16 x 16 led matrixes that I typically use. Each letter gets 16 LEDs vs the 4 LEDs per letter for most other clocks. So a total of 1024 LEDS inside.

This video shows the lightshow when booting up. Something similar repeats on the hour and half.

Material for the case is untreated Baltic Birch. The finger joints mostly hold it together with no glue but there is a bit holding on the front trim ring and the sides where the tabs are lacking. The diffuser is rice paper. The electronics are my own custom board which contains a trinket m0, a clock chip, crystal, buttons for setting the clock, and a shift register so the 3 volt trinket M0 can talk nicely to the LED matrices which like a 5 volt input signal. 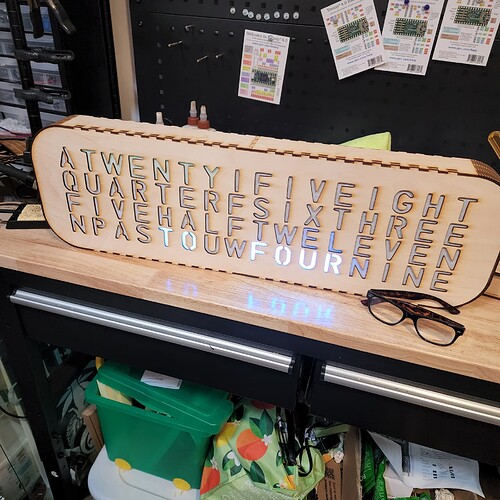 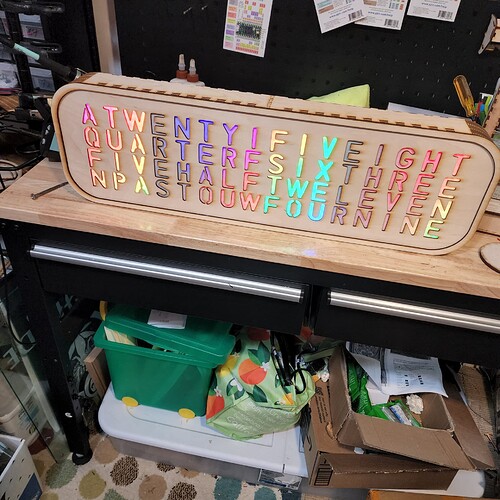 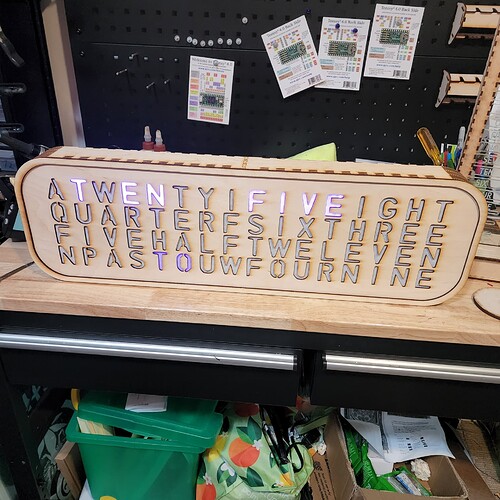 Nice. Got any pictures of the interior?

Level shifting and cost is why I stick with arduino nanos and ws2812b leds. Everything is 5v, simplifies things a bit.

Unless you’re getting into lots of float-based math for your animations ATmega328-based microprocessors like the nano have plenty of performance.

Nice. Got any pictures of the interior?

Sorry, I failed to take any photos during the build. I will do a post on the clock structure/ interior the next time I build one. (which should be soon). Most of the box types have a similar structure.

My first batches of clock brains used a trinket Pro 5 volt which is similar to the nano. At some point they were either on backorder or rumored to be discontinued so I redesigned for the trinket m0 which is a buck cheaper, and has sufficient I/O for the job. It is otherwise overkill in terms of capabilities.

But, since I use the same board (with clock components deleted) for the led lanterns and other (often higher count or trickier animations) LED matrix projects, it made sense to use it. The shift register was not a hard addition.

Impressive! The letter placement to make up all the times is excellent!

The electronics is far beyond me but I am fascinated at how you came up with that letter arrangement Twelve- eleven is a great connection, but some letters seem just space holders?

I cannot claim the overall layout of the words. These were borrowed from pre-existing word clocks. I did have to figure out how to get the corresponding LEDS to light up to tell the time.

You are correct. There are 4 letters that are not used. I change them up from time to time and use them to spell out non time based messages. In this case. There is an extra I in the top row (middle-ish), an extra F right below that. An extra N on the bottom left and and extra W on the bottom row, under the I and F.

I use these to say …

IF
NOT
NOW
WHEN

on occasional half or hour marks (like a digital coocoo clock

I also spell out the word “LOVE” on even more rare occasions.

I use these to say …

I see A-I F - N-O-U-W. I guess the A could be like A quarter to nine and that would use up the A and O, but the words like a quarter to five would have to bounce about a bit.

Me too. Gives me headaches thinking about anything sciency. But I can still appreciate the skill and labor.

my go to is the esp8266. on board wifi (and bluetooth i think?) and a reasonably good processor.

I spent some time building fun toys with it, using the 8x32 (I think) matrix LED’s. I wanted to build a clock but could never get it to work. Got bored.

could never get it to work. Got bored

that describes many of my pojects.

“Short attention span” - although I worked on it for weeks…