I’ve had my unit replaced. As my buddy Garth Algar stated “We don’t like change. We fear change.” So maybe I’m looking for problems. But it seems to me my original unit was pretty spot-on regarding object placement on materials. Since I’ve gotten this unit, however, I feel like I’m struggling to do the same thing.

I’ve opened a ticket with Support to know for sure. But I’d like the opinion of other owners to see if it looks like a problem. So I’ve put it in this category rather than Problems and Support because I’m looking to see what you, my peers, are thinking here.

Below you’ll see a post-run image. So you can see, via the rulers, where I placed my material (pretty much center-bed), as well as where I placed my objects, and where they landed on the material. So there’s no questions up front… The material was measured by calipers at 0.4" (0.3998") and entered into the GFUI as such. The Glowforge tray was used. I set each object at 1000/100/340.

Thanks for taking a look! 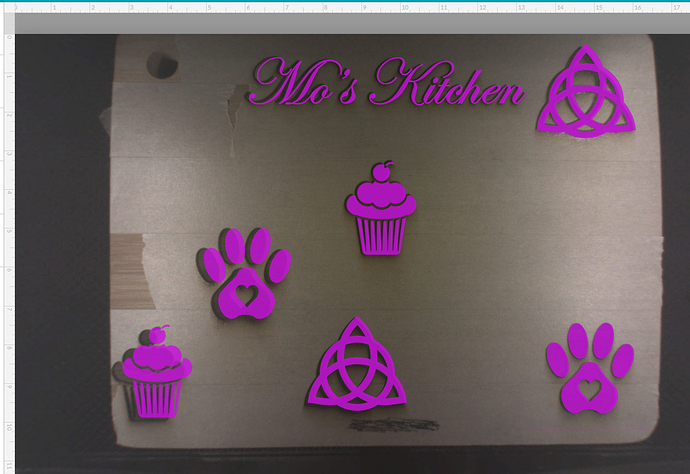 The after image is always further off on mine than the initial image for placement. I don’t think the height information is retained.

But continuing to process any further cuts or engraves will turn out fine if you don’t move them.

Assuming the after-image was correct, though that seems to be in question, I’m showing .265" left difference/.05" down on the “cherry” on the bottom left cupcake, .21" on the left pad of the left paw. In a June post, Dan has stated up to a .25" difference.

A way to improve object placement

Three things: 1) In order for placement to work, the material height must be correct. 2) Then, you may find an error of a few millimeters (less than a quarter of an inch). 3) After a large number of prints without rebooting, the error may increase. This is a known bug - rebooting will reset the problem. cc @rita in case I got some of this wrong.

The bottom-right side of the bed is pretty damn accurate to the after-image.

Thanks. But this is a WYSIWYG situation. I did NOT place that left cupcake on the edge of the material. I gave it a nice margin to be a little more eye pleasing.

First, reboot the machine. Then check it again. If it’s still off, notify support.
(When they pushed through the last update,the placements got out of whack a bit. Rebooting the machine fixed the problem.)

The bottom-right side of the bed is pretty damn accurate to the after-image.

Thanks for that analysis. It does seem to favor the center to the right. But that’s the thing, my previous unit didn’t have that. I never gave placement a thought. Hmmm…

I think we’re going to see a large variation in camera placement accuracy from one machine to the next. I don’t think GF will swap out a machine as defective because of this problem alone. It seems Dan’s attitude toward this is it’s good enough for some applications and not so much for others, but that it should get better in the future:

Is my lid camera misaligned?

Could you describe the use case you’re concerned with? I’ll give you the state of the art now (and we have lots of improvements in the hopper for later).

Seems like it should just be a matter of engraving an array of crosses onto say cardboard, snapping an image of it, working out the positions of the crosses in the image and then applying an interpolated inverse mapping to the image so they appear in the right place. How hard can that be? It should be possible to get at least pixel accurate resolution and possibly sub-pixel with clever software.

One complication is that alignment is dependent on lens focus settings. And then there’s warp…

The lens setting is fixed so if each machine is calibrated after it is set that shouldn’t be an issue.

Yes a warped sheet will cause an error unless its height is measured on a grid and then it can be corrected for using geometry.

The lens setting is fixed so if each machine is calibrated after it is set that shouldn’t be an issue.

I guess I misspoke. I meant material thickness will greatly affect camera alignment, so that would have to be taken into account in any calibration procedure.

Yes but I think that is just a matter of geometry. I think if you calibrate at one height you can work out how to extrapolate that for other heights. Once you work out what angle each pixel of the camera responds to you can work out where it is looking at any height.

I believe that is what they do now when you enter the material thickness in the GFUI.

Glowforge could just include a pre-printed alignment calibration sheet for each owner to throw down on the bed when they want to force a recalibration.

Glowforge could just include a pre-printed alignment calibration sheet for each owner to throw down on the bed when they want to force a recalibration.

You’d need a pad of them. One would be consumed with each calibration since a printing operation on it is necessary to measure offsets in alignment.

I don’t think it would. Throw the sheet down, let the camera take the photo, then place material and regauge accuracy alignment with that. It doesn’t need to retain the placement markers to know whether it’s aligned, otherwise we wouldn’t have the “20x14 document as a jig” (or whatever the dimensions are) ability to begin with.

I don’t agree. In order for your approach to work, the machine would already have to be perfectly calibrated so it knows where to point the laser based on what it sees in the camera.

This is my daily life with the GF and what you’re describing is normal for me. It depends on the job as to how I approach getting around the problem.

12x20 and doing a lot of cardboard templates.

Now with that said, I’ve been squeezing my waste sheets by carving out Escher fish and manually placing the fish including rotation and copies. For whatever reason I’ve not had one of those miss yet and I’ve printed in excess of 200 of them so far.

On the other hand, lining 3 coasters up and using the cameras to position a design centered on them results in tears for anything that isn’t dead nuts under the lid camera. I’ve seen the quarter inch offset and even distortion of the image to the right or left side of the bed. The graphics always offset toward the camera though.