Since I had some thin cotton fabric out after the last project…I wanted to see what would happen when I tried to cut it with the laser.

Great success! It would take FORever to cut something like this out by hand, and the results would be no where near as neat as this one turned out.

To prep the fabric, I covered it front and back with paper masking tape to keep the residue to a minimum on the fabric itself.

Then I just taped it down to the grid, used some double sided Scotch 714 adhesive in a couple of places on the back to stick it temporarily to the grid and keep the parts from flying, and let 'er rip. 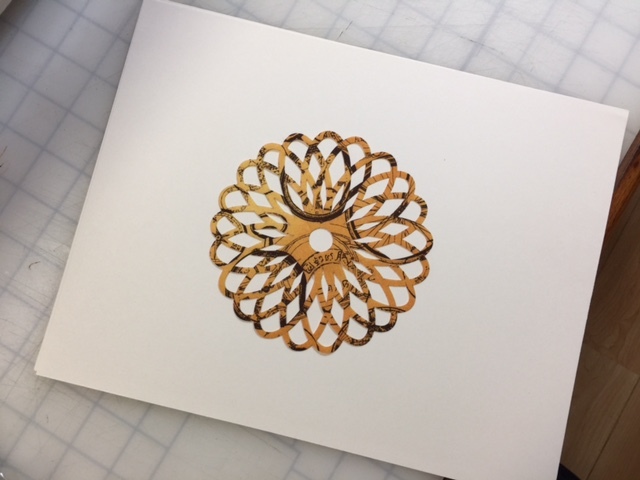 No fraying either, although it does still smell a little smoky.

NOTE: Hey guys…just wanted to mention that this was cut using the old scale on the PRU, and the settings information listed above is no longer correct.

I’m very excited to be able to do this kind of thing!

Thanks Jules!!! That looks amazing and your description of the taping is helpful. My Glowforge plans include lots of fabric cutting for applique work and other projects/methods.

Did you put a fusible on the back to assist with applique? It looks too thin for needle-turn, and seems too delicate for sewing around enough of the edges without fusible. I’m interested in how the fusible would stand up to the laser. I’d think it would cut cleanly and the laser would not deposit enough heat to activate the fusible or melt it back or anything, but It would be nice to see it.

I must tell you, you make me jealous every single day, between the talent you show and the pre-release. They did themselves a favor asking you to test the pre-release, to be sure.

The paper tape masking held it well while coming off easily and not damaging/fraying the fabric?

Did you put a fusible on the back to assist with applique?

No, I haven’t tested that yet, but i think i might have some upstairs - I’ll have to see if I can find it. (It should cut just fine, and will eliminate the need for the paper backing.)

They did themselves a favor asking you to test the pre-release, to be sure.

The paper tape masking held it well while coming off easily and not damaging/fraying the fabric?

Yep! Worked like a champ…much better than on wood, truth be told. It tends to curl up off of wood.

The paper tape came off easily though, with no fraying at all.

If not using PG, what do you use for masking wood effectively?

It’s a roll of paper masking tape that I purchased from Signmax. It is laserable.

If not using PG, what do you use for masking wood effectively?

I’m using the Signmax paper tape, but as soon as that roll is gone, I’m going to try to find another brand that has better adhesion. This one will pull up when the air assist hits an edge that’s hanging out over the material, and it can literally peel it back.

It actually presents a fire hazard if you don’t get it stuck down thoroughly. If it were to jam up under the beam…not good.

Did you put a fusible on the back to assist with applique?

Okay, I ironed some Heat-n-Bond Ultra Hold onto the back of a piece of the fabric and ran another cut…

It turned out fine, but the cut didn’t go all the way through the paper on the back of the fusible webbing, so when that was peeled off, the fabric piece was released. (It’s fine - it’s eventually what you do with it anyway.) 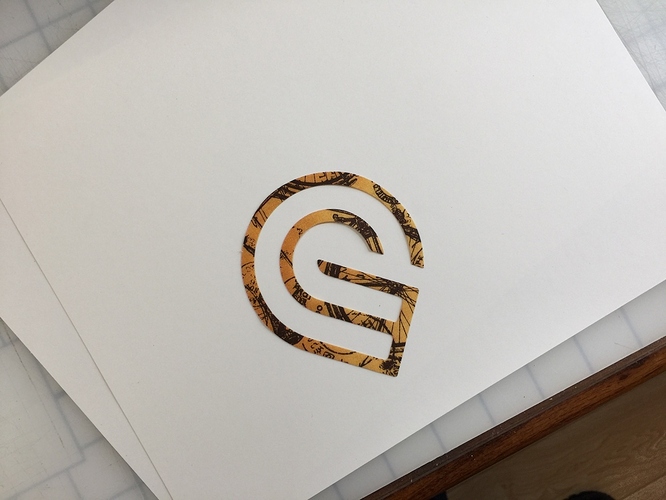 You can just barely make out the shiny webbing on the back of the fabric. 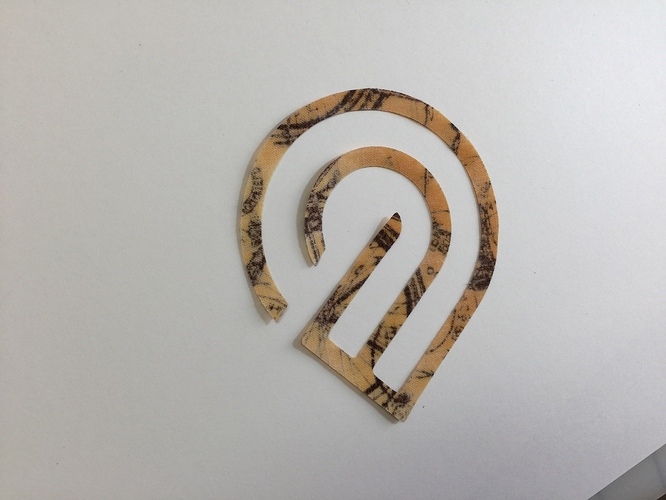 One thing you do have to be a little careful about with Heat-N-Bond, they have a bunch of different kinds of fusible webbing, and one of them is a vinyl webbing. I would not use that one without checking it out first to see if it is safe to laser. (Vinyls that contain chloride are NOT safe, so as a rule, I just avoid vinyls.)

It looks good on my monitor, can see it not problem with the size photo you posted.

Very cool. This is one of my intended applications (not the GF emblem, but, you know…)

Looks really good! Thanks for posting it!

The heat from the laser doesn’t “activate” the bonding from “Heat and Bond” ?

Well, for about the width of a hair, (the kerf), I guess it does, but since the liner is still attached at that point, the adhesive just cools back off again and stays where it is.

All of the adhesive has already been heated once to apply it to the fabric - you iron it on, then cut it with the laser.

That is amazing.
I’m a newbie. What are the correct settings?

I think you are going to have to do a little experimenting. Start with power of 1 or 2 and work up. Start with a fast speed like 500. Make sure the fabric is held down securely so cut pieces don’t fly into the path of the laser.

New to Glowforge. Your remarks say these settings are no longer correct. Can you provide the correct settings?
Update: I now see the settings suggested. Thank you.