I’m away from home so I’ve been passing the time in the hotel working on a laser cut wallet design. Heavily based on one of the free templates from http://makesupply-leather.com/, but laserizing it. Makesupply’s Youtube videos for designing laser cut wallets tends to use circular hole cuts, but I’ve also read that the “slit” method results in something more akin to what you’d get from using traditional leatherworking tools to make the stitching holes.

Anyway, given that I’m not home to do test cuts, I’m curious if folks think this design is up-to-snuff? Also, feel free to steal.

Hmm. Not sure why the stitching isn’t showing up in the image.

This is what it’s actually supposed to look like…something is happening to my SVG between my computer and Discord: 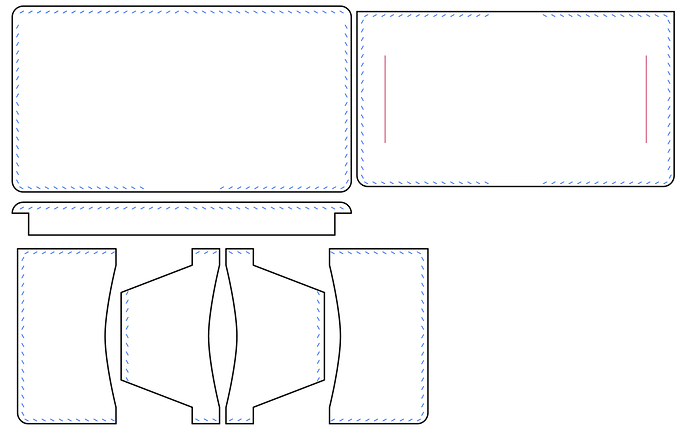 Did you perhaps mean to put the link as http://makesupply-leather.com/? The way you have it above is doing some crazy things. I also have wanted to do some leather in the laser.

Yep, that’s the one. Sorry about that. Fixed it in the original post.

Nice that you will have it ready to laser when you get home!

What a happy happenstance, I was just looking at this design the other day! Thanks for making this!

Pinging the ‘Leather Woman’ @morganstanfield, or the ‘laser Lady’ @smcgathyfay. Slits or holes?
I know nothing about leather, but in many materials holes tend to tear less than slits.

I gotta knock out a birthday present first, and then I’d like to take a crack at it.
Thanks for the file.

I’m for holes myself because they tear less easily, but then I don’t do a lot of traditional leatherwork, in which the “thread-tunnels” are punched out with a chisel-shaped tool that facilitates two-sided stitching.

Few notes on your SVG. When I loaded it into the GFUI, it showed up as an engrave for some reason. I was able to convert it to a cut instead, and then the stitching showed up.

I’m going to try bringing it into inkscape now.

It looks like a really cool design. I eventually will have to try it

Looks like the SVG has neither stroke nor fill specifically articulated so I think the GFUI just interprets the objects as filled which creates an engrave.

I haven’t looked at the SVG file (just in Inkscape) so I’m not sure that’s specifically the case but it’s the likely one.

What’s weird is when I open my own SVG on my computer, it shows up fine. When I download the one on this thread and open it, it looks blank (except the outline cuts).

What’s weird is when I open my own SVG on my computer, it shows up fine. When I download the one on this thread and open it, it looks blank (except the outline cuts).

When I download & open in Inkscape I just see the cut outlines. But if I change the Display Mode (View|Display) to Outline I can see the cuts for the sewing. 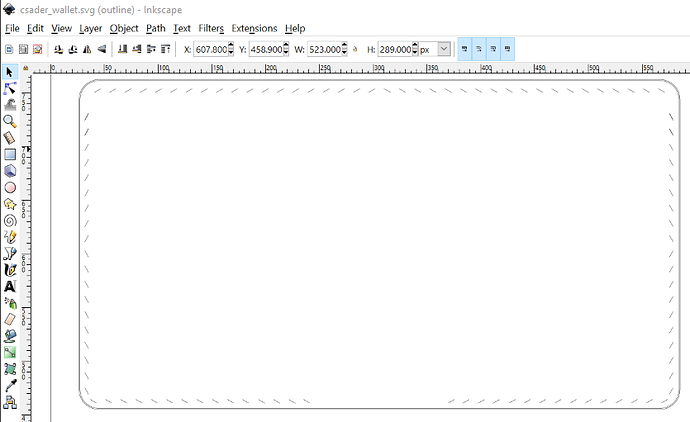 If you’re in Normal display mode and click near, not on, the edges you’ll see little selection boxes - those are the sewing holes. So click on the lines and make the stroke black and fill null. Then lasso all the inner parts and set the stroke to blue and fill to null and you’ll see what you expect. 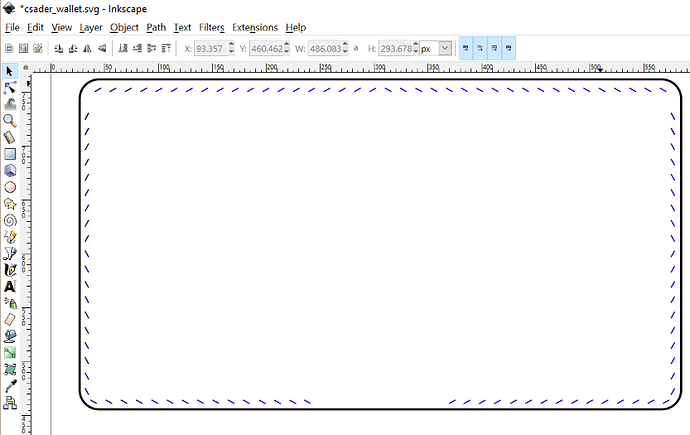 Thanks. Fixed the original. Still no idea why that happened in Illustrator, but whatevs.

Thanks. Fixed the original. Still no idea why that happened in Illustrator, but whatevs.

NP. Just a flaw in the AI SVG generator. Every app implements their support for the SVG standard a bit differently. And even within the same application there’s usually a difference between a File Save As and an Export.

Has anyone made this? I would love to see photos!