Experiment with rounding corners in AI

There’s been some discussion about using AI to round corners in cuts and scores to try to avoid the problem GF has with making pinprick-sized spots where the laser dwells on a sharp corner for just an instant as the head comes to a stop and then takes off in a new direction. The idea is to substitute short curved paths for sharp corners making it possible for the head to move continuously. Yes, it’ll have to slow down as it changes direction, but if it never stops completely, the effect of having a bit of extra energy dumped into the material will get spread out a bit, reducing the effect.

Since I didn’t find too much in the way people actually doing it here on the forum, I decided to give it a try. I created a table of star-shaped scores and varied how much the corners were rounded and the speed+power with which I scored them. I chose white cardstock as the material because it’s pretty hard NOT to burn a hole through on engraves with corners.

Here are the results:

As you can see, when the head is moving at speed 500, the pointy corners are burned through even when the rounding is 0.020", but when the speed it reduced to 200, the burn-through goes away when the corners are rounded to 0.010". On the obtuse corners between the star points, even rounding the corners to 0.005 prevents burn-through.

As you can also see, there is still one burn-though in every cut. It happens not at a corner but where the cut begins and ends.

All of this is consistent with what you’d expect. The amount of “extra” energy that gets dumped into the material depends on the how much the head needs to slow down as it goes around a corner. For a given corner angle, a slowing the speed of the score (or cut) decreases the amount of rounding you need to avoid burn-through. And for a given speed, you need less rounding as the corner angle increases.

For the record, here’s how to round corners in AI.

If you save your design in AI format, you can go back and change the amount of rounding using the appearance panel. When you export to SVG, the rounded corners get changes to paths the GF can understand.

(I’ll shift this to the Tips and Tricks section and link it in the Matrix.)

This thread is similar to this one:

Here’s how to do it in AD: Rounded corners with Affinity Designer

Another thing to do is to take a note from professional fabricators by doing things like designing lead-ins and outs. Your pierce point is always going to have more energy deposited at the surface increasing the chance of material imperfections. Build a lead-in so the laser is already cutting by the time it gets to your actual job area/part.

Setting up the operation for the material is also important. Everyone wants to go full-speed but reality is reality. If your parts need to be a certain way, set the speed to what is manageable and the power accordingly. There is a reason that they use a speed of around 125 on Proofgrade HQ score settings.

Another thing to do is to take a note from professional fabricators by doing things like designing lead-ins and outs. Your pierce point is always going to have more energy deposited at the surface increasing the chance of material imperfections.

Yeah, this is a great idea for cuts and I’ve been planning to do this for some designs I have in the works. In most cases it’s not possible for scores, though.

I’d be very interested in knowing how to do lead-ins and lead-outs on the GF. So far as I can see, there’s no way to specify this for cuts or for scores.

Ah, this is a very useful demo! Thanks for contributing it to the community!

I’d be very interested in knowing how to do lead-ins and lead-outs on the GF. So far as I can see, there’s no way to specify this for cuts or for scores.

You’d have to modify your paths in Illustrator (or another drawing program) to add extra segments for lead-in/-out. For example, to cut a circle without a hot spot at the start/end of the cut, you’d want something like this: 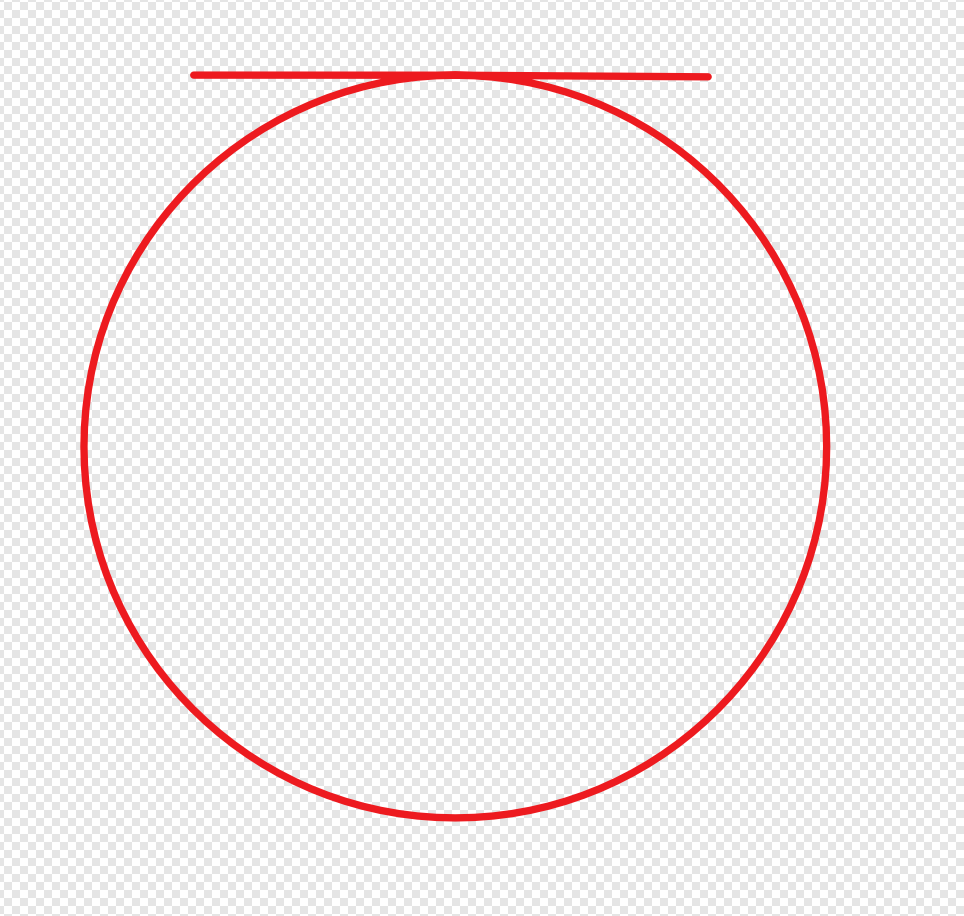 Thanks for this! I’ve used the Round Corners effect a number of times–pretty handy–although I never thought of it for this purpose.

Surprisingly, you don’t. I’m used to having to expand the appearance on anything I’ve modified for any other cutter, but the GFUI seems to be picking up the altered paths.

Ah, I think I understand. In the example you gave, the idea is to cut a circle. The straight lines are in waste areas. The cut begins at the start of one straight segment and continues to the end of the other. That makes sense.

Thanks for the explanation.

As it turns out, no, you don’t need to do an Expand before exporting to SVG. I thought you’d have to, but a little experimenting shows that the export process applies the Illustrator effect during the export process. That means, of course, that if you open the exported SVG file in Illustrator, you’ll effectively get back the expanded version and won’t be able to adjust the amount of corner rounding.

Exporting to SVG loses lots of info (from any program) as there are limits to what can be expressed in an interchange format like SVG. It’s always best to keep a native file for future editing, but the limits of SVG mean that a lot of stuff gets done automatically when you export.

Excellent. Thank you for the process.

Just adding this script here also, after following from another post - I like Illustrator’s built-in rounding but sometimes you want a bit more control, so I’ve long used this script. Sometimes one is better than the other, so this one is good to play with also. Your mileage may vary. I use it a lot with detailed papercutting to avoid burn-through.