Just some experiments using GF and 3DS Max to generate depth maps to drive 3d engravings. Mostly focusing on how to do bevels. Anyone had any luck doing deep engraves ie greater than 1/8"? I am already up to 6 to 10 passes to get to a a good 1/8" and doing more for deeper cuts does not seem practical for time.

Also GF Support PLEASE PLEASE add some way to markup an SVG so we can add the GF cut/engrave info directly into the file. I want to experiment on using paths to do bevels instead of bitmaps which would seem to be way more efficient and faster, but after generating the paths and bringing them into the GF UI it is not practical to set the values by hand since there are just way to many. I can write a plugin in 3DS Max that takes a 3d bevel and converts it into paths with various settings automatically to test with to see if it is practical but right now there is no practical way to test this. 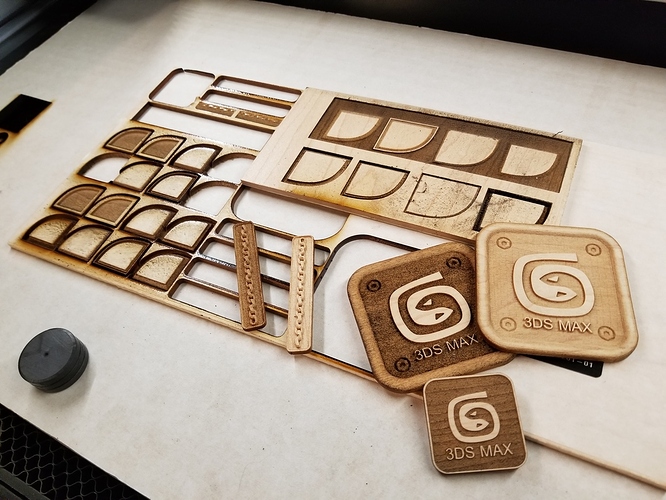 This is great. can you explain the workflow a bit more - how do you generate the depth maps?

Anyone had any luck doing deep engraves ie greater than 1/8"? I am already up to 6 to 10 passes to get to a a good 1/8" and doing more for deeper cuts does not seem practical for time.

Looks like you need to look into learning some of the manual settings.

As for depth, that’ll be a function of material you’re using. I did an engrave in non pg maple last night that was 0.09” deep in one pass, and I was going 600 speed. I had plenty of room to slow it down and go deeper.

As for beveling with paths — if I understand your intent— in theory if you choose a color scheme you will be able to set power by color, but depending on how smooth you want your bevel to be (how many “steps” of depth you’re aiming for), that’ll be a tedious process.

You could get clever with stacking paths (sort of manually doubling or tripling passes to get greater depth) and reduce the number of colors you’d need, but it’ll still be a bit janky.

I did a bit of experimenting with engraving via path here, it might be of interest:

Awesome work - especially the chains. I have some learning to do!

Yeah, the chain engraves are my fav too. Very nice!

Wow, your work is amazing! I’d love to see a tutorial from you when you get it figured out.

Thanks that is a very interesting idea. I could you use your approach to make one continuous path if the bevel was closed. Then just vary the power once you past your start point every time. That would be the fastest way but just need access to a away to vary power along a path. Grr it is so frustrating not having any sort of SDK or any programmatic access to the settings. There are ton load of tools that the UI needs but no way to create them.

I’m actually glad they didn’t open it. You can very easily end up with all manner of janky half-baked toolsets if you do. Look at the messes that are app stores on IOS and Android… the average app is a piece of junk.

Just because someone has the SDK and ideas doesn’t mean he or she knows how to make a cohesive bulletproof toolset, nor does he or she necessarily have the resources or will to keep it up to date when GF changes their main software.

The worst possible outcome would be to have a ton of features that don’t work well. (Inkscape plugins, I am looking at you)

Edit: I’m not saying that an API or SDK is necessarily a bad thing, I just think it’s got to be implemented very carefully. It’s very difficult to rewind that decision, and especially difficult to do so without revealing your trade secrets. I can see why GF hasn’t done it.

BTW here is the workflow that I used to generate the Depth Mask. It is a bit 3DS Max specific since that is the app I use, but should be similar to other 3d apps like Maya, Blender, etc.

So first you need to create some 3d geometry, for the chains I just created a torus, squashed it a bit and then cloned and rotated each clone 90 and moved it up a bit. Then applied a twist deformer to break up the uniformity. So you get something like this

Then you need to define the view to render the depth map from. In Max you create a Free Camera viewing your object and set it to orthographic so there is no perspective. Set your render output size and file type to render to ( I use png 16bit grey scale), turn alpha on. Then you need to set your render to output the z depth info. For Max you do this with Render Elements by adding a Z Depth element which requires zmin/max values. The zmin is the starting z depth value that will render white and the zmax is the ending value where black will be rendered. You may need to use the tape measure to measure the distance to start and end of your object from the camera to find these values. Then just render and you get a file like below

Upload the file in GF UI and set it to 3d Engrave and you are set.

I will try to do a video which will explain it better and in more detail.

You can export the 3D file in a different format (OBJ, STL, FBX) and render the depth map in Blender.

I’ve carved much deeper than 1/8". So far basswood produces the best results. You definitely need to use manual settings.

Anyone had any luck doing deep engraves ie greater than 1/8"?

And then there was 3D Made on a Glowforge

This is gonna be so much fun

Did the crow without any adjustment to the file I had already made and still looks pretty darn cool. The last pic is just a sneak peek of something that turned out pretty neat if I do say so myself. (Not that I had much to do with it really.) After doing the initial 3D engraving with a photo of a CNC file made by Yura Tikhonovskiy, I’ve made some adjustment to the pic to see what further detail I can bring out. It’s cutting now. (I’m not going to pos… 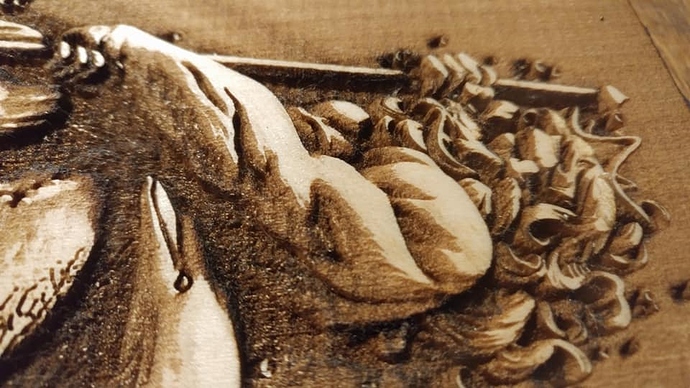 Even more 3D (Bat and decorative tile) Made on a Glowforge

The novelty will wear off eventually and I’ll stop boring ya’ll with these posts, but man, this 3D setting is a blast.

I’m getting use to adjusting the greyscale files for the black to cut all the way through and got some pretty cool results this time. Neither of these have any cut lines in the design at all other than a square cut around the outside. Basswood makes for amazing engraving. [3d kittrell bat] [3d kittrell]

Thanks all for the suggestions. I will try poplar or basswood.

I could you use your approach to make one continuous path if the bevel was closed. Then just vary the power once you past your start point every time. That would be the fastest way but just need access to a away to vary power along a path.

I don’t believe the SVG file format recognizes gradient strokes along paths and that is likely a limitation GF can not workaround unless the SVG standard gets updated, or they add support for other file formats.

Using a solid color path you would still need 20-30+ paths to produce a smooth bevel just 1/8" wide and even then, the laser is so precise I don’t think the bevel would even be smooth. It would still be somewhat noticeably stair-stepped and have some areas burned deeper (or higher) than it should be simply because of minuscule inconsistencies within the material.

Having the individual paths in the file however presents another issue. The GF app won’t handle that many paths very well.

Edit: Well, I’m surprised the GF app opened this test file with 20 paths even though it’s a pretty simple file, but that’s not to say it would catch all the paths at the time of creating the final motion pathing. I think this file would still look a bit stair-stepped though.

Very nice !! That chain engrave would be a nice frame around a small ornament or coin sized design (by curving it into a loop/circle).

As for stair stepping isn’t this what happens when you have a bevel that runs horizontally when using 3d engrave with a bitmap. It follows the bitmap horizontally at one power in this case. Steps up the power to match next horizontal line value and repeats. The main issue I would think would be hard corners where the GF stops and burns that corner to change direction which could be mitigated some by curving the outer corner.

Yes, ultimately there will always be some stair-stepping so it comes down to how much is acceptable versus the ability for the GF app to read however many paths it takes to create it.

Here’s a thread I posted in July 2017 with some bevel tests.

Engraving Bevels! Made on a Glowforge

Sorry @Jules, I could not resist giving this a shot!