I am thrilled to report that this tutorial is no longer necessary. If you use the default Draft Photo engrave setting for large sized engraves, the image should process without needing to be split.

(I guess I’ll leave the rest of this up in case anyone wants to know how we used to have to do it.)

One of the owners wanted to engrave the large sized PNG image shown below and was having trouble getting the interface to accept it.

The Glowforge Interface currently has trouble accepting bitmap engraves with a large surface area, and Glowforge recommends splitting the bitmap into parts and engraving them in stages.

The problem with using the image splitter (Imagesplitter.net) to cut a design like this into fourths is, there is the potential for doubling up of the engrave at the edges, or not getting the engrave to extend far enough, and then you might have lines in it.
(There’s just not a good place to split the engraved part of the design.) 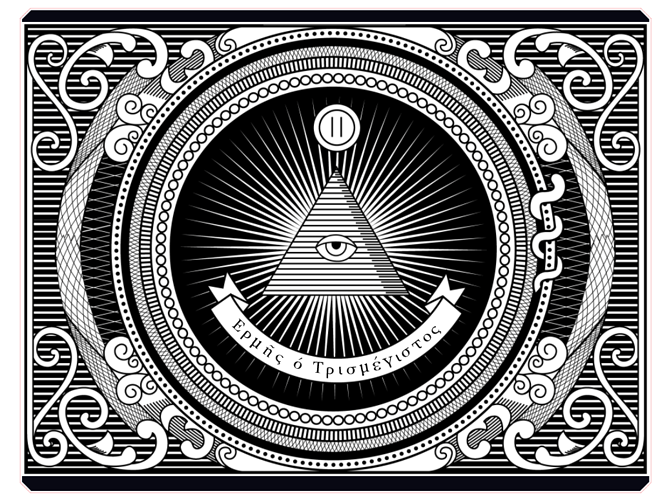 In the Glowforge Interface

.
This one was still a little bit too large though, and generated an Unspecified Error after about 15 minutes. 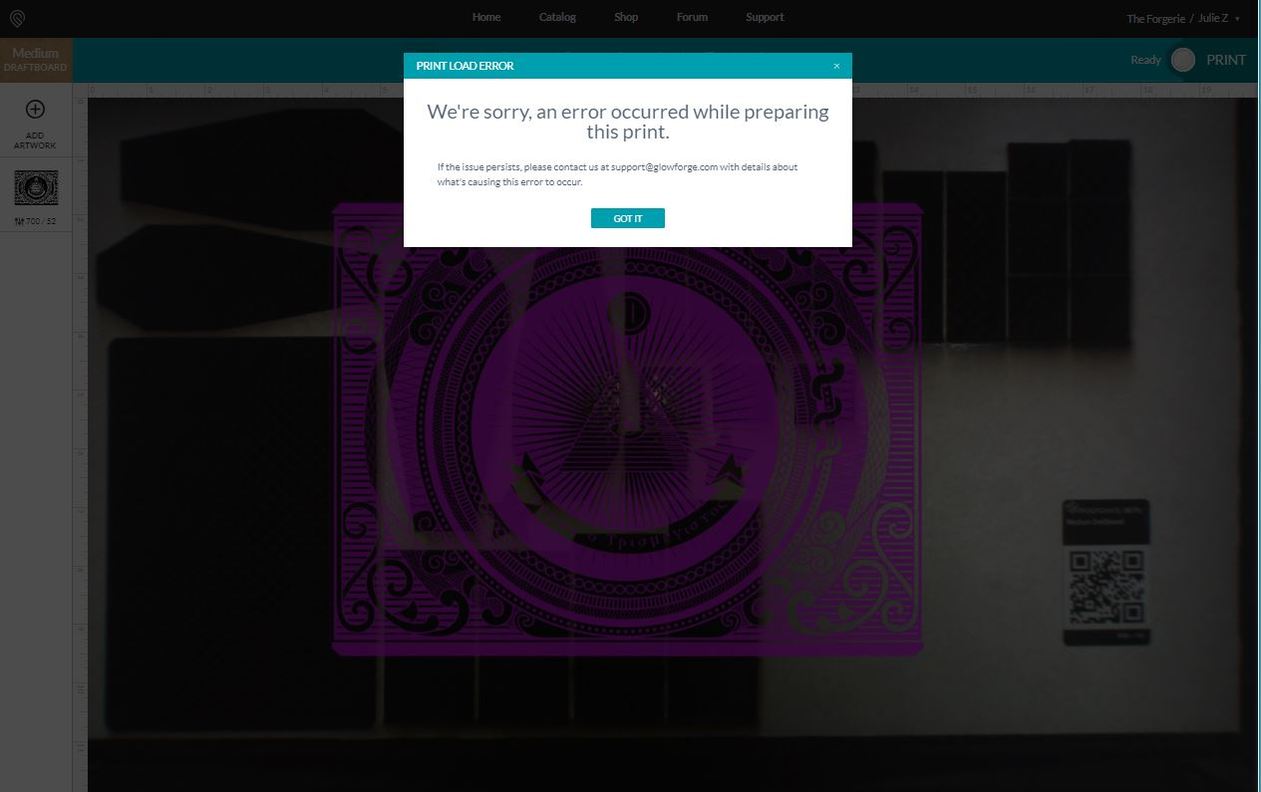 Okay, so we have to split the bitmap file. I’m going to take it into Photoshop to split it, since I don’t want to use Image Splitter.

In Photoshop (or equivalent) 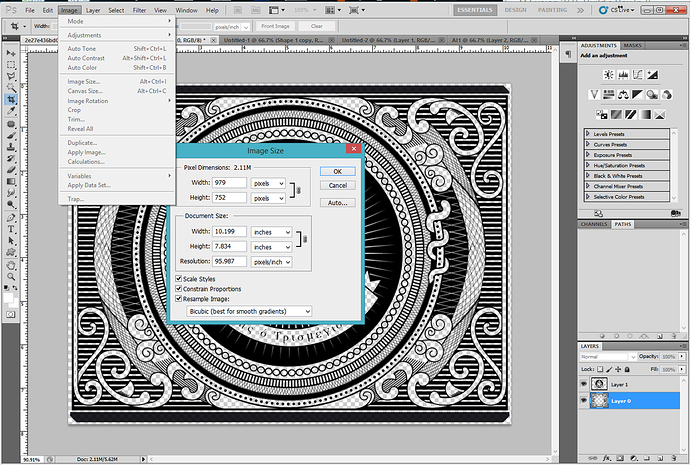 Click the Magic Wand tool, set the Tolerance to 1 as shown in the slots below, uncheck Contiguous, and click once on something white. Then hit the Delete key on the keyboard. 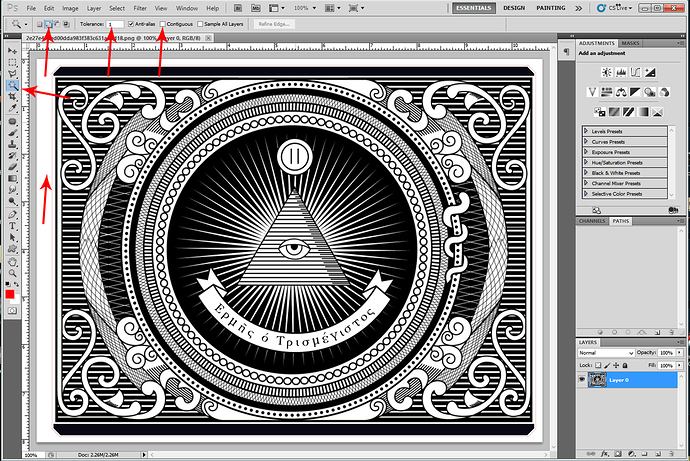 Now we want to split up all of that black engraving into a couple of chunks, so that if it’s still too large for the interface to handle in one go, we can do them one at a time if needed.

I’m just going to pick the big solid black sections that I can easily capture with one or two clicks: 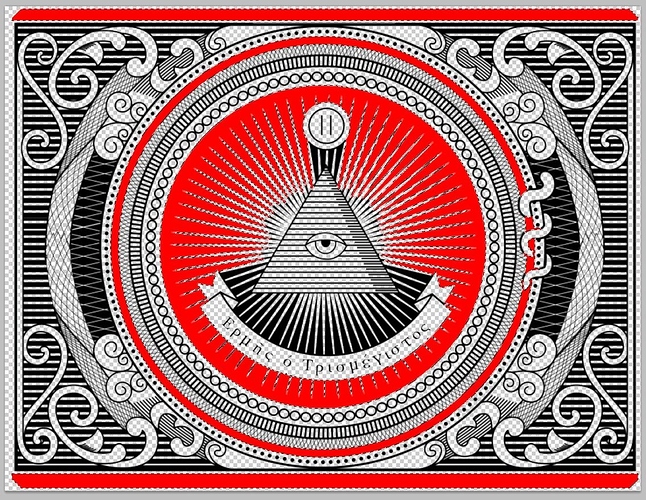 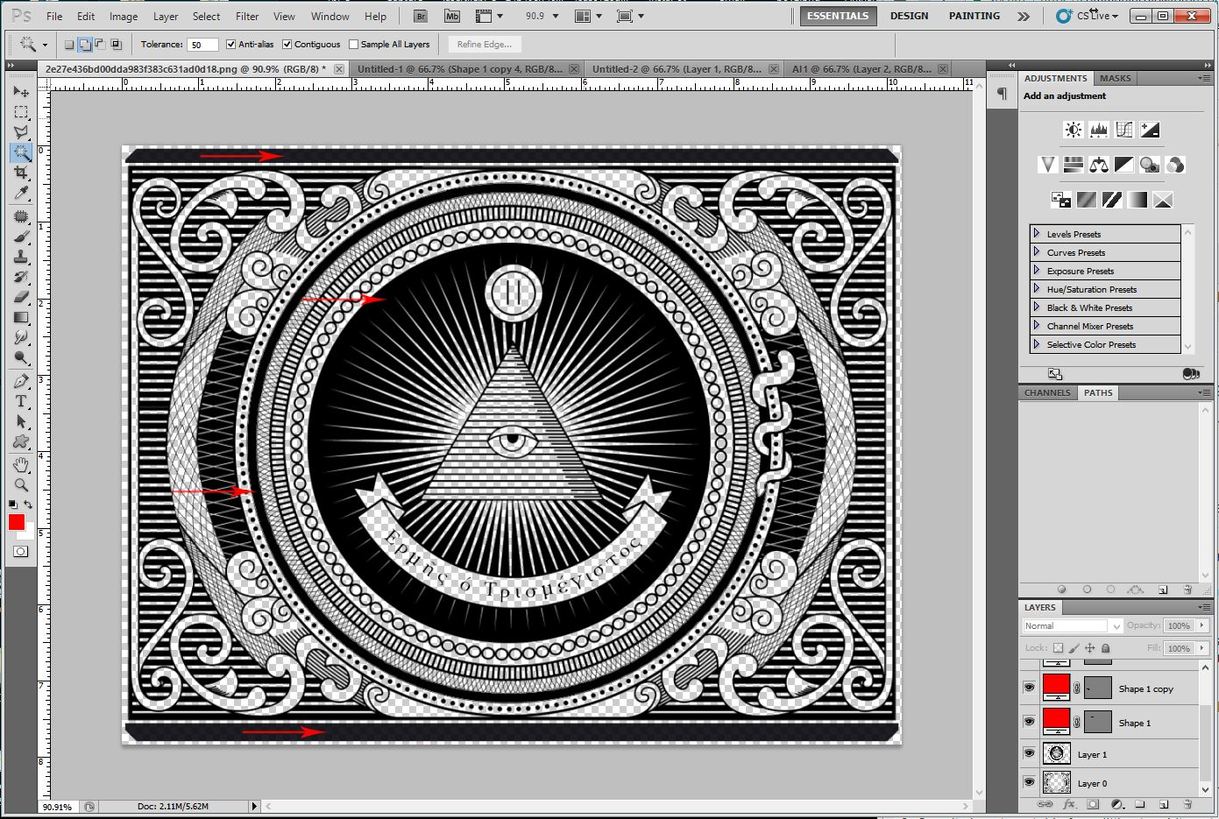 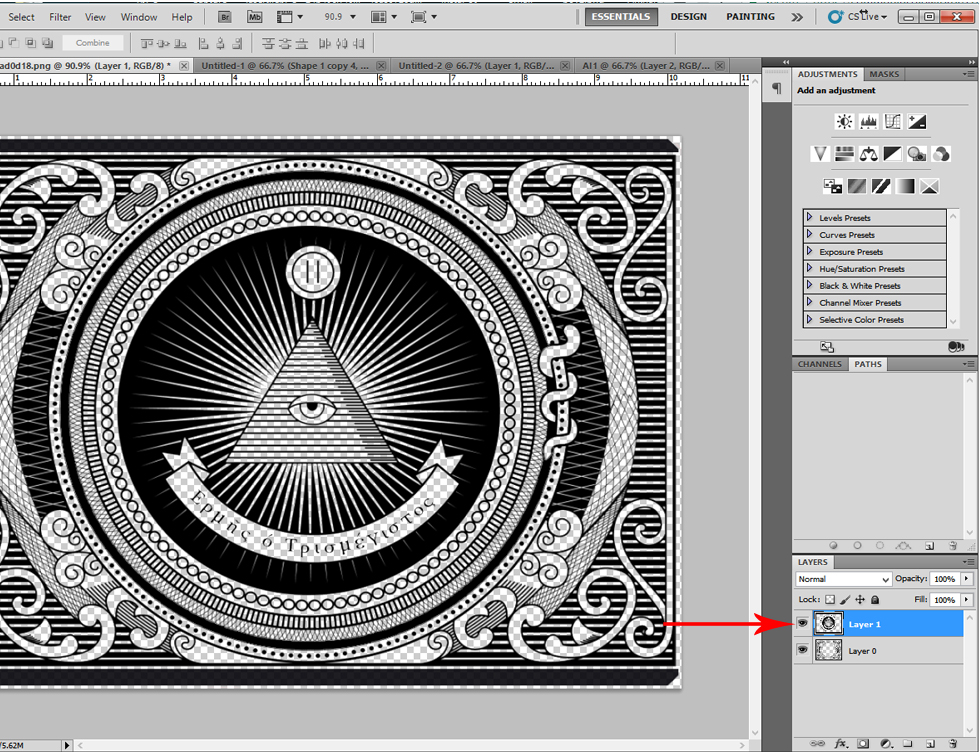 Then click on Layer 0 (the bottom one) in the Layers Palette, with the same areas still selected, and hit the Delete key on the keyboard. You just deleted the duplicate information out of the original drawing. 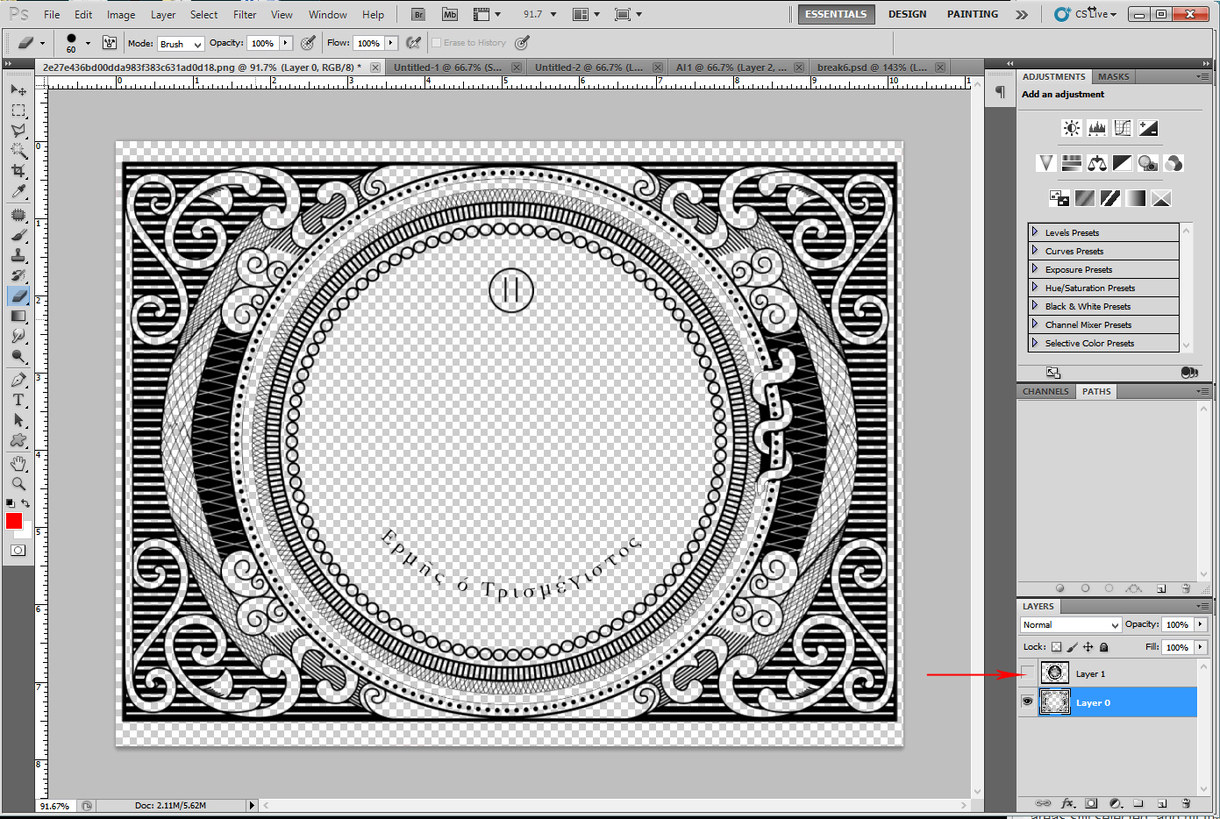 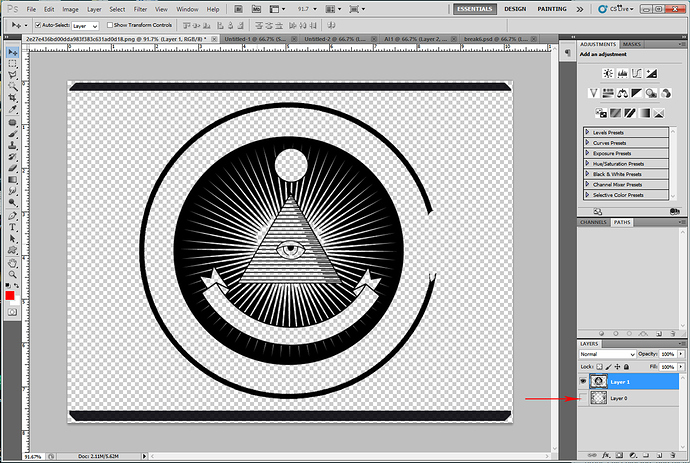 In Adobe Illustrator (or equivalent) 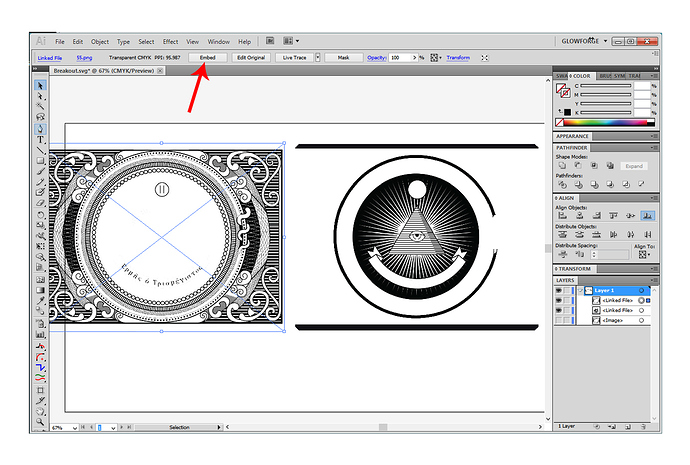 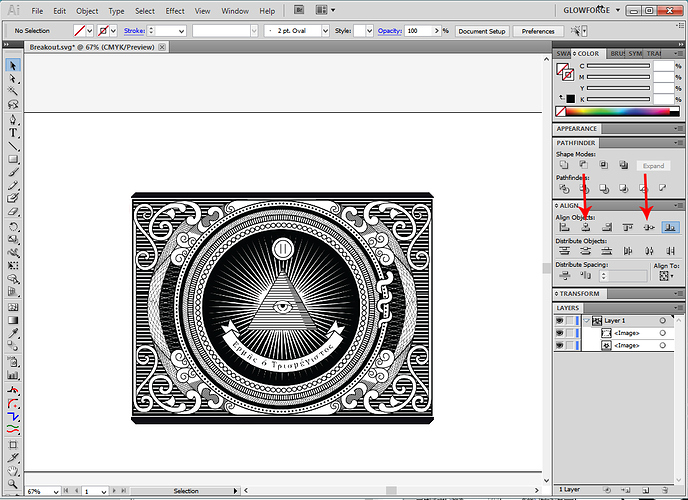 In the Glowforge Interface

Note: If you absolutely can’t live with 195 LPI, you can set one of the Engraves to Ignore, and try to process them one at a time at a higher LPI. Totally up to you.

Note: Give it about half an hour for full bed prints to process before you throw in the towel. Depending on the complexity of the file, it can take a while to process all of the data. (I usually set them running and go fix dinner.)

Success! And no ugly lines breaking up your engrave! 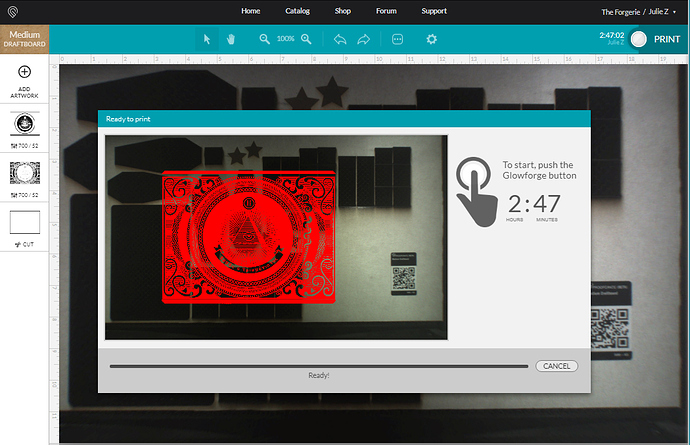 Is it worth the trouble to do it this way? Totally up to the individual. If I needed to do one that had no breaks in it for splitting, I’d do it this way to get a better result on the finished product.

And you can split one up into as many small parts as you need to, to take the engrave in small enough steps that the interface can handle it.

The benefit to setting the files up in Photoshop as layers is, they will all export as the same outside dimensions. When you use the alignment tools in Illustrator to align them, they re-align perfectly.

Okay…I’m done again. Thanks for reading.

57 Likes
Edge-lit acrylic engraving
Best practices - file set up?
How I did the Civil War print
For the newest of Noobs
Pressure Building...Temperature Rising
Any Ideas on how to get this printed?
Gray scale, pencil shaded art 8x10. Stuck at "Prepare your design"
Split Images - aligning, snap together & locking
Dividing images in illustrator
How do i separate parts of a picture so i can give them diff colours/assignment
My First GF Project
Error after uploading SVG/JPEG of one file
Seam on split files
sailbyc November 14, 2017, 1:51am #2

While I’ve used PS and AI for a decade at least, I always learn something from you. Bookmarked. Of course, I spent a bunch of time thinking about what you were making with those little squares cut out of your

Wow, another phenomenal tutorial. I don’t use photoshop but these concepts should translate to GIMP.

You rock! And roll. 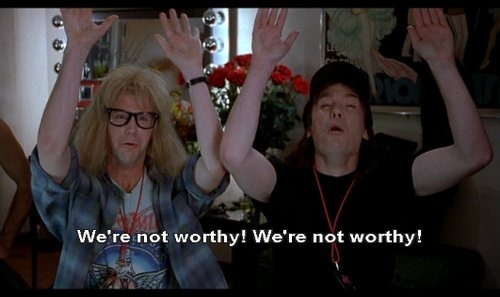 but these concepts should translate to GIMP.

They will pretty much translate across the board to any advanced photo editor - the nomenclature will change but the concepts are the same.

I have not yet tried to do a really large engrave, but I know what I’m going to read when I do.

Earlier today I independently concluded this approach was the way to go, and in my case also a necessity because I wanted to do an integrated design that had parts engraved and other parts hit at high power to cut. Doing separate bitmaps and combining in Illustrator worked a treat. Great walkthrough!

That’s a clear and logical instruction; thank you! Got the job done but (more importantly) made clear why the approach is beneficial.

Beautiful explanation. I totally would have screwed up the splitting-up part by trying to select regions (top-to-bottom or left-to-right). But this works better and without the finicky.

Thank you for the layers lesson! I see this method of layering different aspects of the file as superior to splitting the image.

WE LOVE YOU @Jules!!

@Jules, GF Owner of the Year. And hopefully, she will get her forever GlowForge soon.

Thanks you guys! ( My turn will be coming up soon.)

Ohhh, that is useful.

So I’m having some issues…Whenever I select something and CTRL+J it does paste to a new layer but no longer keeps it selected so I can’t delete it from the main layer…any ideas? Using photoshop CC.

CTRL click on the icon for the Layer to select everything in that layer.

Then click on the bottom layer without the CTRL key to move to working on that one.

ohhhh. Thank you. While you’re here, running into a new problem. Doing a full bed engrave, and I’ve busted this picture up into 13 different parts. And it still can’t engrave the biggest (which isn’t very big) one. Pulling my hair out on this one.

Might be something else locking it up, or it might still be the size…full bed engraves are going to be tough to pull off.

If you reduced the LPI to 195, and taking it in steps doesn’t do it, all I can suggest is to reduce the ppi further. That might not work, depending on what you started with.

Ya, this is the most disappointing thing for me on the glowforge. If it wasn’t cloud based we wouldn’t need to jump through hoops just to do large projects. Any idea when they’ll finally address this?