THE LATEST: I reproduced the problem in a new smaller test file, @dan saw the post and passed the data on to the engineering team. Cool.

I just saw something pretty darn weird. It is repeatable, photos and video are below, and the SVG is attached too

Summary: During a job which involved cutting a lot of little circles with identical settings, the head speed increased when cutting some of them, producing misshapen cuts that did not cut through.

The head also seemed to move from one cut to the next at increased speed, but the distance traveled is so small that I can’t be sure about that. The extra speed of the head was enough to wobble the heavy cart that my Pro sits on, it was very dramatic!

The file is super simple, one 68 mm circle containing a bunch of 5 mm circles. I built it by hand in Illustrator and it doesn’t contain any nonsense than I am aware of. It’s also using the same workflow and template that I have been using all along–I didn’t change anything in my processes today.

Here’s the Save As SVG dialog I use: 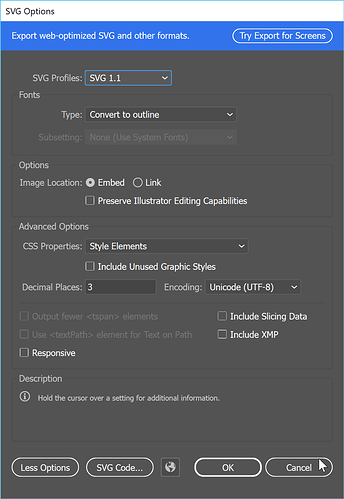 (I did type values like “5mm” into Illustrator’s tools but it converts everything to inches, plus I have done that before a million times with no Forge trouble.) 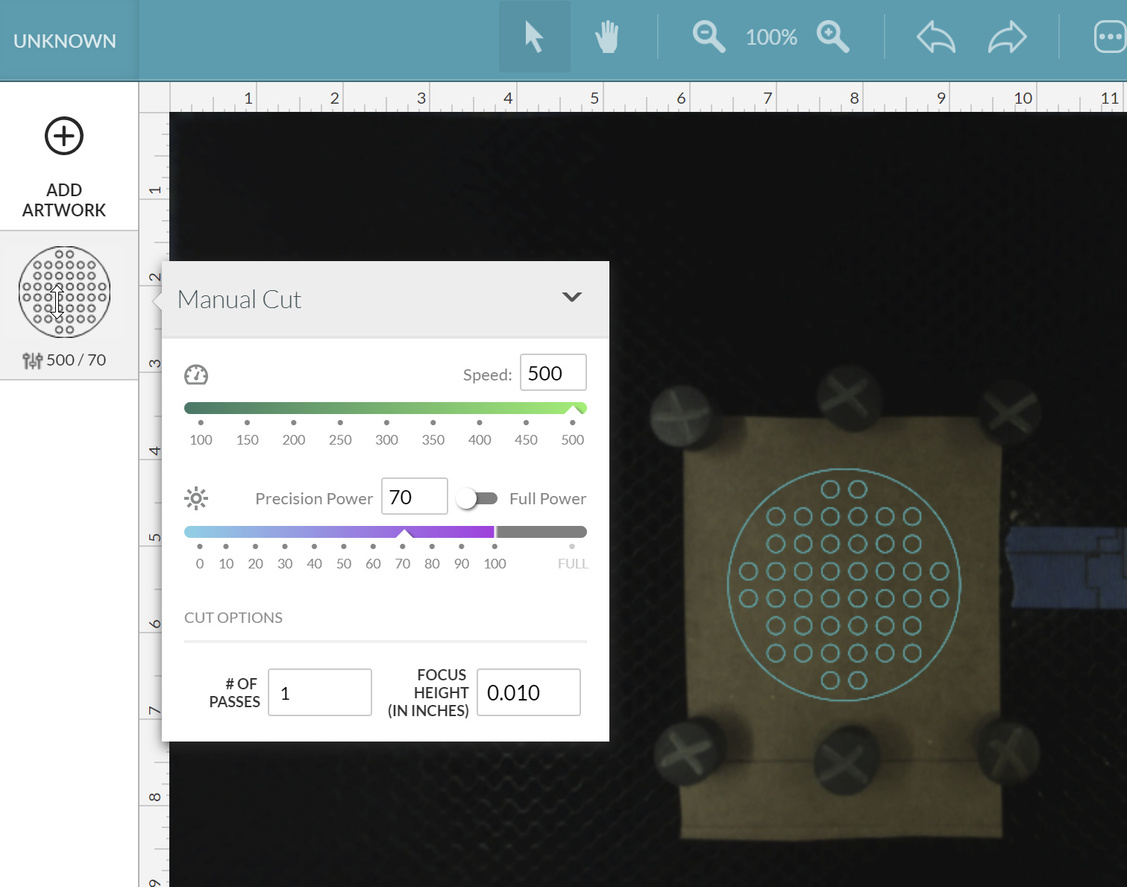 You can see here the circles which were cut at accelerated speed did not cut through and drop free as expected. 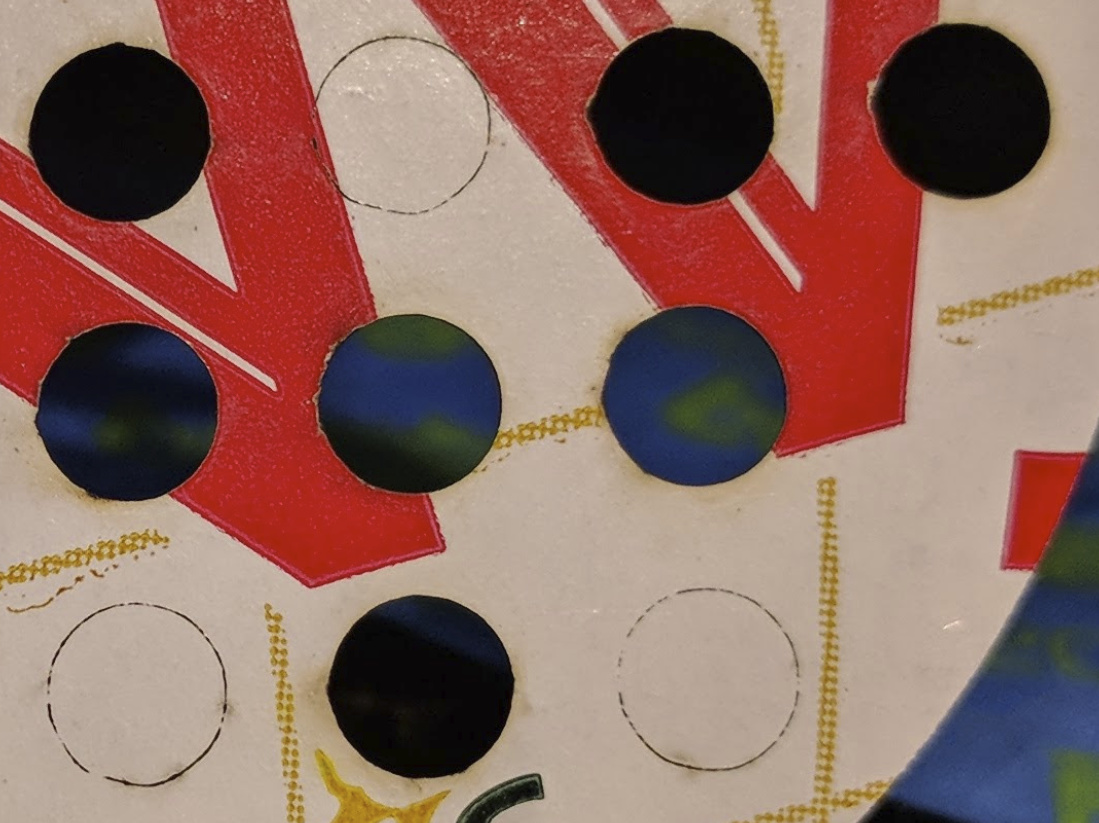 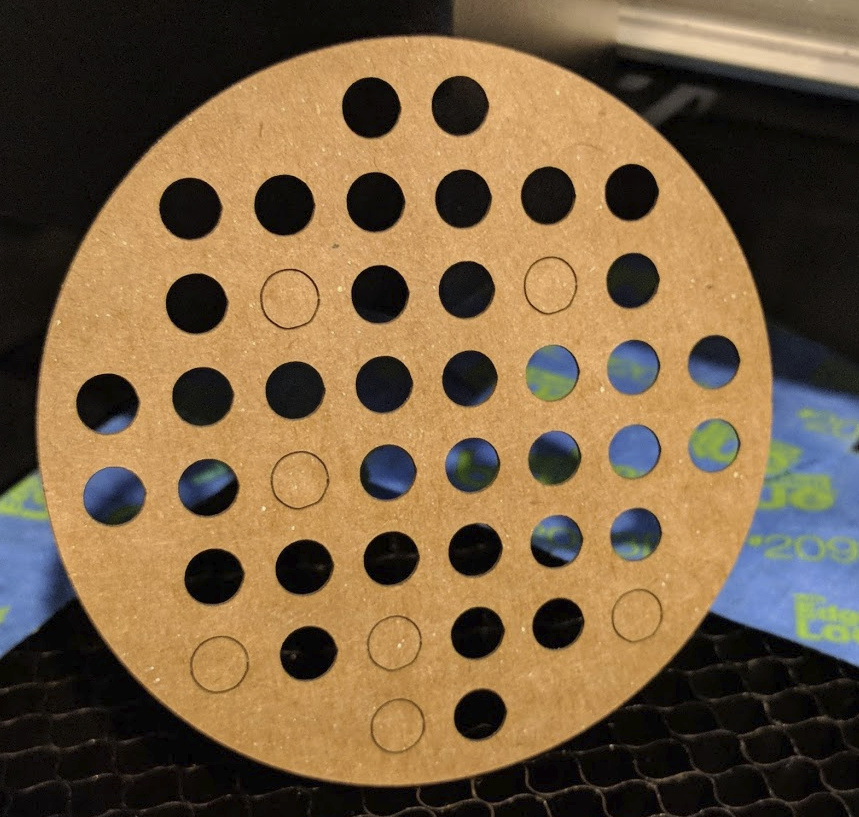 If you look closely, most are also misshapen. 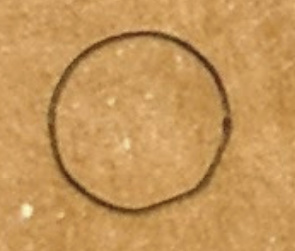 The two jobs displaying this problem were run at approximately 14:00 and 14:15 Seattle time, 2/14/18. I did not compare the runs to see if the same circles suffered from the accelerated cuts… I thought about that too late.

If you want to try a repro, this is the SVG I used.

1 Like
Need help reproducing a cut speed bug on Proofgrade . Anyone have Thin Leather? [RESOLVED]
Free rhinestone font on the 17th of every month
erin February 14, 2018, 11:32pm #2

I’m curious what happens if you don’t use all the magnets? Like, if you just use tape?

It probably doesn’t make a difference at all, but that looks like a lot of magnets, and I think the head of the laser also has magnets. Maybe there’s a very slim, very unlikely change that it’s being affected by all of them?

These magnets aren’t particularly strong, and I have used similar amounts before… but I guess anything is possible.

What really confuses me is that I had speed set to maximum already, so the cuts that move too quickly are actually breaking the 500 speed limit!

Or it’s trying to reach the max speed. I don’t know that it will reach max speed around a small circle like that.

Either way, someone posted a problem with this before in problems and support - on almost the exact same material (not that the material is the cause).

I try to keep up but I missed that one all right. Darn, thought I had a NEW bug!

What really confuses me is that I had speed set to maximum already, so the cuts that move too quickly are actually breaking the 500 speed limit!

The GF will only hit max speed on larger items that allow it the room for full acceleration.

The misshapenness seems pretty consistent though, however you know the first thing Support will ask is to try reproducing it on PG material.

We never did figure out what caused that one, did we? I recall looking at the file and having the file itself cause the same problem on my machine…once. After that, when subsequently run, it didn’t do the same thing.

I was wondering if the small circles were getting corrupted by the momentum of the head or something. It was a bunch of small circles like those that were affected by it.

Can i make a suggestion to try something @GrooveStranger?

Take those small circles in Illustrator, select them all at the same time, and go to Object > Path> Add Anchor Points. Then try to run it again and see what happens.

Take those small circles in Illustrator, select them all at the same time, and go to Object > Path> Add Anchor Points. Then try to run it again and see what happens.

I will try that next time I have Laser Time.

Oh yeah, that sure does look related.

If this thread gets banished to BtM I will re-repro on Draftboard. I do not see how it can be related to the file.

The OP on that thread thought maybe it was the SVG circle command (which AI uses). That would be easy to test by just expanding your circles with stroke only, which would make them compound paths and remove the circle element.

I think it’s something to do with the speed in relation to .2” circles, honestly. But I haven’t tested anything.

The OP on that thread thought maybe it was the SVG circle command (which AI uses).

Let me rephrase what I said: while it may be related to the file, it can’t be the result of any non-standard knucklehead operations that I did.

There’s something screwy going on and I hope it makes it onto someone’s to-do list.

Yeah, never mind on the nodes thing - I just ran it, and although it did speed up on several of the little circles, they cut out perfectly circular.

I was cutting on goofgrade Baltic Birch too. Are you trying to cut that out of something thin like cardboard?

The extra speed of the head was enough to wobble the heavy cart that my Pro sits on, it was very dramatic!

I don’t know that we have seen any cases where platform movement has contributed to print errors like this, but makes one wonder?

If I was doing this project “for reals” I definitely would cut the outer circle last. It was a quick and dirty job and I decided to let it ride when I noticed the error, since the cardboard is not valuable.

Then, I observed the weird speed issue and decided not to tamper with the file to preserve repro.

Hopefully later tonight I will make time to do more tests, maybe make an optimized repro file, and murder some draftboard.

I don’t know that we have seen any cases where platform movement has contributed to print errors like this, but makes one wonder?

Can we get Glowforge to do one of these?

I admire your sense of adventure. I eagerly await your results (and video)!

I just got back to this and repeated the test with these changes:

I still saw the problem with cut speed variation, but this time the small circles which cut poorly were different and greater in number.

I’m attaching the file for giggles but I intend to create a new, faster-cutting file which shows the problem, and repro it on Draftboard in a new post to try and get official attention.

Replying to myself, so tacky.

My attempts to repro the problem on Proofgrade failed! Bottom line, I suspect the speed boost problem scales up with the speed you set… and no Proofgrade cut runs at speed 500, as do the easy reproductions we can get on cardboard.

I have made a new thread with more details and a request for someone to try cutting the new smaller test object on PG Thin Leather, which has the fastest PG cut speed (246) and might demonstrate the problem.

Need help reproducing a cut speed bug on Proofgrade . Anyone have Thin Leather? [RESOLVED] Everything Else

THE LATEST: No need for extra test cuts on Proofgrade, @dan has verified that something may not be right, and sent the repro case to the engineering team. THE SUMMARY Can someone try cutting the 1" diameter SVG below on Proofgrade Thin Leather, and see if it comes out as expected, or if some of the circles aren’t cut correctly? Thanks in advance for your help nailing down a Proofgrade repro for the support forum! THE DETAILS A couple of days ago I found what I believe to be a bug in how the …

Thanks for the help… IMHO this is a real problem, even if they don’t yet sell material that is susceptible!

Thanks for letting us know about this, and for taking the time to provide all the details. This is very helpful. I’ve passed this on the team and we’re looking into it. If you run into any other trouble, please open a new thread.