That’s no moon, it’s a Icosidodecahedron. 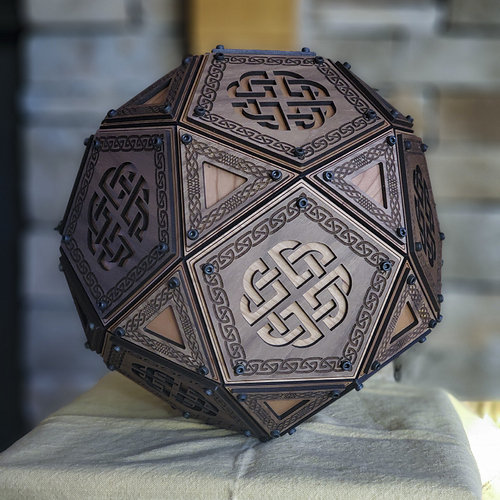 Here is a bit more information on the build process, so I apologize in advance for such a long post.
I’ve been a big fan of the platonic solids that can be downloaded from Thingiverse, and have created a few Icosadedrons and a couple Dodecahedrons. Making those was one of the reasons I bought a 3D printer, to go alongside my Glowforge. Unlike the Glowforge, where my creations are almost 100% my designs from Illustrator, I hadn’t done much with the 3D stuff, and got most of what I printed off the internet. I forced myself to learn enough Fusion 360 so that I could make the parts necessary to build a Icosidodecahedron. I took a few stabs at it, but finally figured out the math/angles/software to pull it off. I’m sure for 3D guys, it’s simple, but this was new territory for me. The other thing, is that you need to print 30 of these 3D parts to complete the entire shape. It takes my Dremel printer a little over 20 hours on medium to print them in 2 batches of 15. 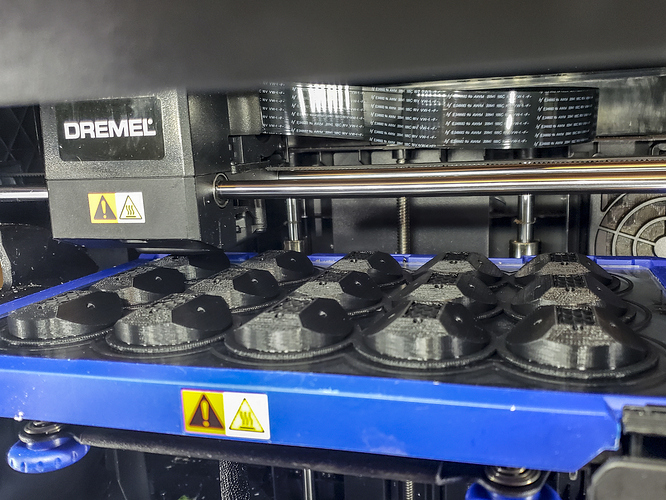 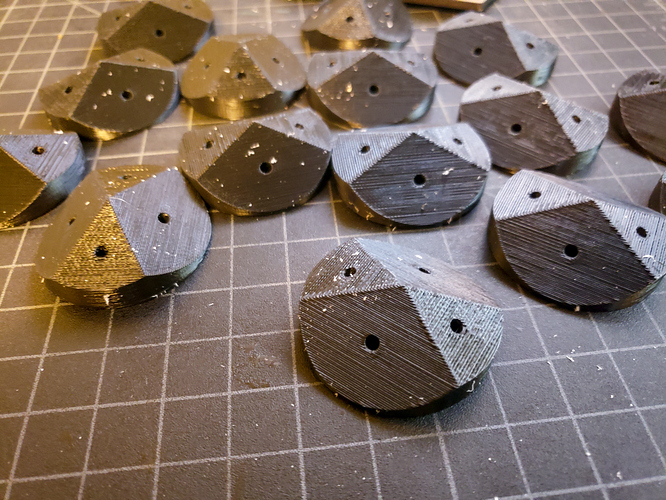 I used draft board to build a prototype to see if my angles came out correctly. Either by luck, or I might actually know what I’m doing, the thing assembled perfectly. I used 16mm M3 Socket head screws.

View of the inside during construction. 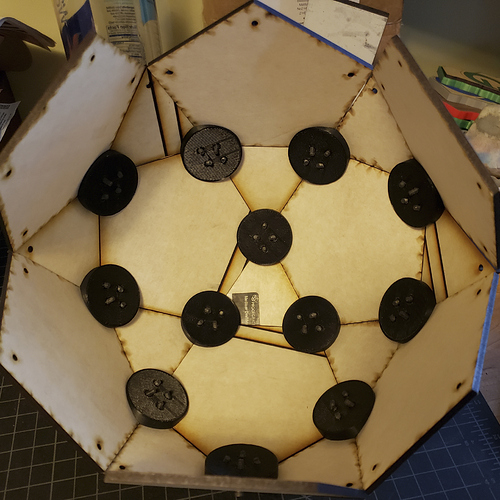 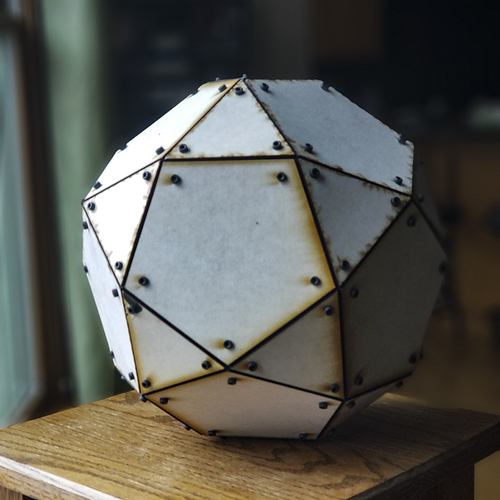 Knowing that my 3D Printed parts would work, I started the

back up and cut a multi-level design on

Walnut and Cherry. I went with a Celtic theme. 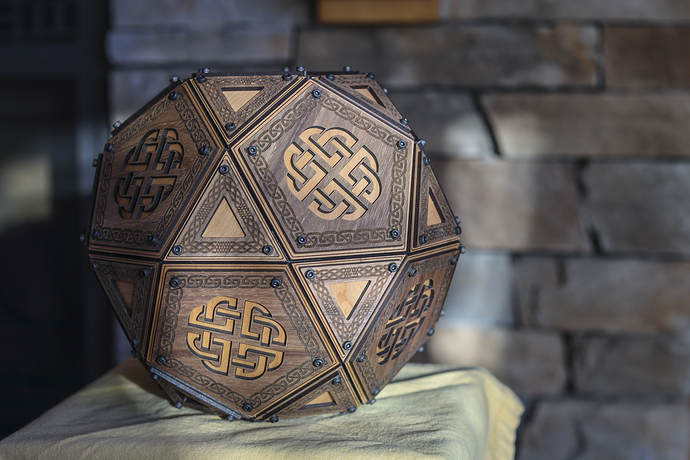 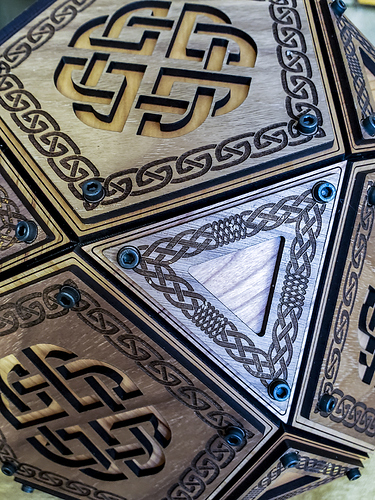 I’m going o design a stand for this, but will take a break today. I also got Glow in the dark filament from my work Secret Santa, and think that I’ll make one of these in clear Acrylic where the parts glow in the dark on inside!

Want to make one yourself? Buy the Icosidodecahdron Archimedean Solids on Etsy.

Next up: Rhombicosidodecahedron, Rhombicuboctahedron, or Cuboctahedron???

Its dual polyhedron is the rhombic triacontahedron. An icosidodecahedron can be split along any of six planes to form a pair of pentagonal rotundae, which belong among the Johnson solids.

I like it! I don’t have a 3d printer, and usually scoff at the connector-and-screws style but this one has some great style. Nice work.

Wow! That looks great! (And the thought of all of those little screws just makes me cringe!)

I do! If you’ll figure out the angles, I’ll make the parts for you!

As for figuring out the angles: sketchup and “angle between faces” plugin. I don’t do the trig, that’s crazy.

And the thought of all of those little screws just makes me cringe!

Well, I had to do it twice, since there was the prototype testing. My MS isn’t cooperating this weekend, and my hands probably dropped screws, wrench, parts, etc. like 50 times, so it was a lesson in patience. 120 Screws, so it takes while for sure.

och, trig is not crazy!

I haven’t learned Sketchup yet. sigh

Awesome work. I like the extra faces on Rhombicosidodecahedron so try that one.

240 Screws on that one, if my math is correct. I’ll put it on my list to try and figure out.

I’ll put it on my list to try and figure out.

The good news is that the wiki article already figured it out for you:

That should be all you need to devise your connectors.

You’ll need 12 pentagons, 20 triangles and 30 squares. All sides need to be the same length, a total of 62 faces. This is backed up on the wiki page here:

62 faces, 120 edges, but you are interested in the vertices, of which there are 60 [assuming that you want to make vertex connectors like you did in the OP]. To me it looks like all the vertices are identical so you only need to devise one.

If it were me I’d model the faces and then use rotation and snapping to create the properly angled vertex connectors… who wants to do that trig.

The key is the dihedral angles.

I think this is a statement I may never have come across if it weren’t for the Glowforge and this forum.

@pubultrastar, you’ve outdone yourself once again. I take it that it might only be a week or so until you do it again? LOVE your creations!

it might only be a week or so until you do it again?

I doubt it. I’ll just wait until next year.

I made a stand for it. 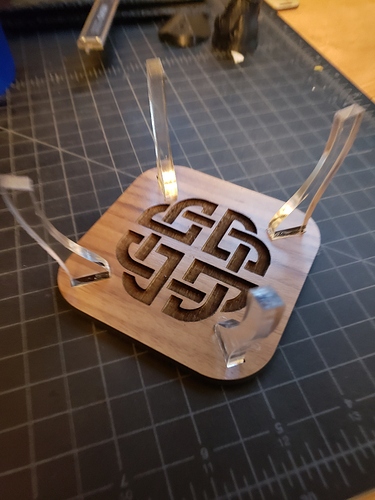 This is so beautiful! I must have something like this in my life.

Did you happen to put your brackets up on Thingiverse?