Is my lid camera misaligned?

see if it can engrave over the top accurately

Yes, that would tell me how accurate it is. But they’ve left themselves a wide margin of error with “current software can experience a shift of up to 0.25” between preview and printing on objects placed near the far edges of the bed." I haven’t done anything to the edges of the bed. What I can attest to is placing images on the edge of my material… and I’m talking EDGE… and being amazed how it hits that every time.

Seems like yours is actually much better than 0.25" then.

Seems like yours is actually much better than 0.25" then.

Could be. That “shift” is on the outer edges, and I’ve been using the middle of the bed. I’ve been not only pleased with placement accuracy, but impressed!

I asked the PRU owners to do this, way back when there were only three of them. One did, but with anger for some strange reason (“are you happy now?”), and then both he and I were ridiculed by a highly respected forum member, something like, “I would have never asked for that to be done, nor would I have complied.” The PRU owner kowtowed a response “won’t happen again.”

Hopefully people are more open-minded these days, and are willing to put their machines to the test like this. We all have in interest in how alignment is improving with successive software updates, and this is the best way to gauge it.

Yes it very strange that technical discussions about the machine’s capabilities are verboten and pointing out realities is called trolling. Some people must lead very sheltered online lives.

I have been in a few online communities and this is very different. I think it is defined by the product and its price, which is an expensive Apple like product that is very easy to use. That seems to bring a totally different crowd of people to say something like RepRap. I don’t remember any pictures of cats, hedgehogs or babies there. Lots of robust technical arguments and a few real trolls.

It is quite out of character for me to buy something like this, for example I don’t have any Apple products or use any cloud services. I mostly use open source tools. But I needed it to be up and running quickly for my business use, ha.

Yes so would engraving striped test patterns to find the actual resolvable LPI and DPI. Also test how a stepped grey scale maps to shade or depth. Like the patterns on the old TV test cards.

When I was working on the first electronic photo booth we bought an actual hardware test card to test the camera and digitiser. It was actually a wooden board with printed card on it. Most of the grey scale was printed but the last but darkest one was black felt and the last one was a hole with a much larger black box behind it, lined on the inside with more black felt.

Well, we may be small minority that will put the machine through its paces once we get it. (Interestingly relevant idiom, that one: trot, canter, and gallop).

I feel with near certainty that several others have done this privately, and have opted not to share.

Perhaps rule a grid of lines over the cardboard and have it trace those and engrave them. That would show how accuracy changes across the bed

You want a printed grid pattern scanned and then printed back out? I can probably do that. Again it’s a PRU and scanning and camera is a dynamically changing code base, but can give you an idea of what it does right now…

A course grid scanned and engraved over the top of so we can see any misalignment and how it changes across the bed please.

As ever it is unclear what the differences between late PRUs and production are, and whether the software is the same on all machines.

You want a printed grid pattern scanned and then printed back out? I can probably do that. Again it’s a PRU and scanning and camera is a dynamically changing code base, but can give you an idea of what it does right now…

Thank you! That will be a useful benchmark.

I think most of the folks here actually have pretty well rounded lives and don’t compartmentalize this piece over here and that piece over there. Most of us have families and perhaps babies, like cats and dogs and even hedgehogs, sometimes like to get silly and fun and creative and random, like to wish people well with Birthday greetings and anniversary congratulations, offer empathy and sympathy when sad or tragic things happen – and still have a passionate interest in the Glowforge.

We just like a well rounded view of life and a relationship with those here who are our neighbors.

Many of us truly believe in the machine and the people who are making it, believe in what it does today and what it will do tomorrow, trust our neighbors here in the forum that have one and are using it that they are telling the truth, and are happy in their joy.

You can keep demanding that you want this, you want that, you deserve this and you deserve that, but don’t be too terribly surprised if some of your neighbors here in the GF community take exception.

Having a tough time making that big a grid since all I have is a regular laser printer (at work I might be able to print an 11x17). This is tiled. The problem is that some of those ripples are due to my taping job. 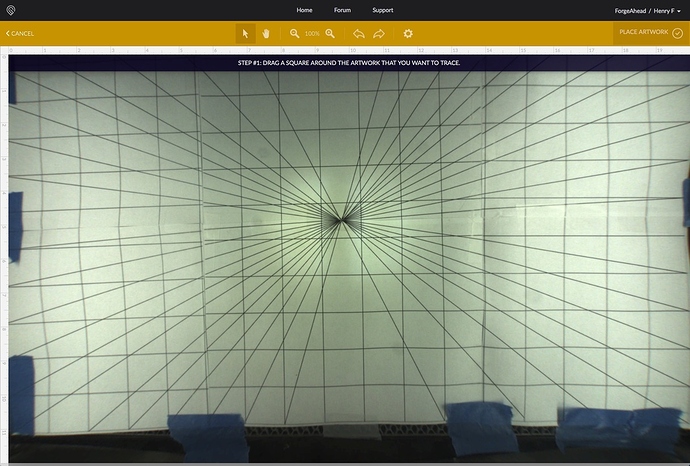 This will work fine. Just use the whole lid camera capture as “the artwork you want to trace” and etch/score right back on top of it without moving it.

That’s way more professional than I thought of doing. I was going to take a ruler and a sharpie to a piece of cardboard

That’s way more professional than I thought of doing. I was going to take a ruler and a sharpie to a piece of cardboard

Oh, I can do that too. Or I can tape that to the cardboard… (ooh, spray adhesive would make this perfect…)

I can tell you my experience with folks asking me to test the focus. Everybody was interested in benchmarks and I just wanted to get practical things done. I tried to help, but didn’t always produce as people would desire. I’m not an engineer so I don’t think that way. It is rather intimidating and frustrating to try and respond to some very erudite folks when you just don’t have the technical background.

But I don’t think I got a PRU for that reason. I guess I got it because I just threw everything I did on the forum and did as best I could.

However, I did participate in a very real and practical application of the Glowforge trace and scan capacity working with @cynd11’s cat stickers. We had lots of discussion about this and the judgement was, it needs to improve, it will improve and then it is improving.

What is fascinating is that there are many others who had PRU Glowforges with amazing technical backgrounds and the ability to do all these benchmark tests. They don’t show up on the forum. Nor did they even post much on public places. Even the reviews are pretty minimal. I can’t believe there is no one with a PRU just cranking out YouTubes. I want to say, let us all consider ourselves lucky that people are posting anything and be a bit more gracious about it.

Are you kidding? You were one of the best choices, bar none, to get one of the first PRU units…you spent an inordinate amount of time testing and demo-ing the unit, and people were absolutely hanging on every single thing you showed. I watched every video, multiple times. And you didn’t have any documentation at all to get started with.

Because you did, it made it easy for the other folks who came behind you to jump right in and not waste a lot of time getting up to speed.

Don’t be discounting what you did for everyone here. It was a cornerstone thing. Everything else is built on it.

But I don’t think I got a PRU for that reason.

I’m absolutely thrilled you got a PRU because you did share so much and were willing to try things both for yourself and others. It takes a lot to go the extra mile and share what your doing by making photos, videos, and finding the words to explain.

I don’t want to name names because I’ll forget somebody and I don’t want to leave anybody out. I think overall there was a great mix of testers for GF that covered the gamut of potential GF users. All contributed something and several of you went above and beyond.

I’d say my only regret with the whole process was Josh not having a unit the whole time. That had to have been hard to have had such wonderful toys then lose them.