The complexity of a puzzle is usually dependent on how many tiny pieces are crammed inside its box. But by introducing mathematical fractals into the design, this plain nine-piece puzzle by Oscar van Deventer looks like a nightmare to solve.

I just saw it on gizmodo, too! As I watched it, I just kept thinking “So how am I going to make this with the Glowforge?”

Not a fractal. At all.

And also, it would be pretty trivial to make with the Glowforge.

Just create a little 3 pointed star thing, and then place them end-to-end, stacking to fill any size of grid you want. Choose a few random sets to trim around (and in some cases through) and you are set.

The build isn’t the problem , as you said. It’s all about design. We live in an age where it’s no longer about what you can or cannot create, its about thinking up what you want, and how much your willing to spend.

Yea, that’s pretty much what I came up with. I was mostly trying to figure out a way to not have to put in all those fillets manually. But I don’t really have to use rounded ends.

They’re pretty cool. I just built one using a hilbert curve I drew up many moons ago. 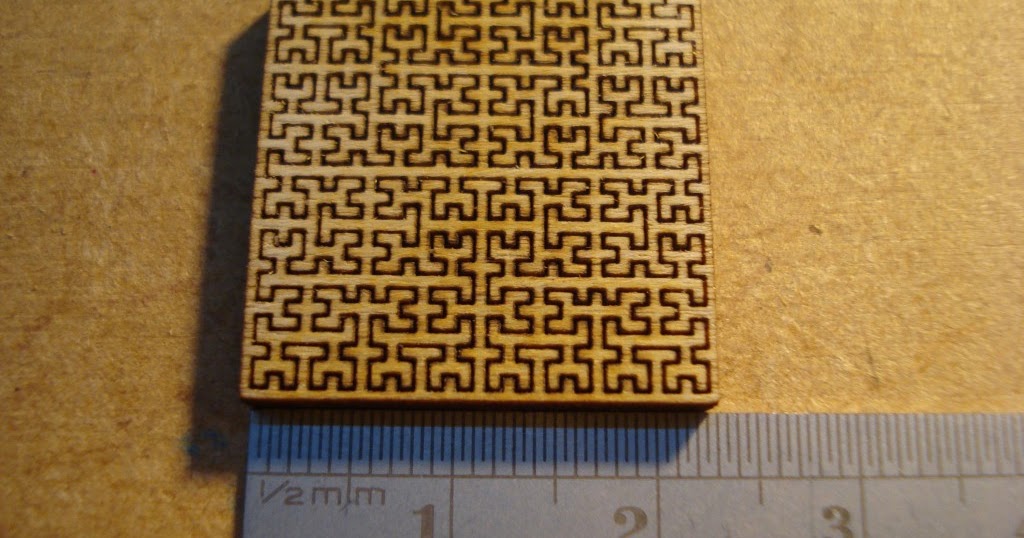 Following on from the teeny text  I wanted to see what kind of resolution I could get out of the laser. I chose the Hilbert curve as a...

I rejigged it slightly and separated it into puzzle pieces.
You can have the file to cut your own too
svg file which may not display correctly in browser window 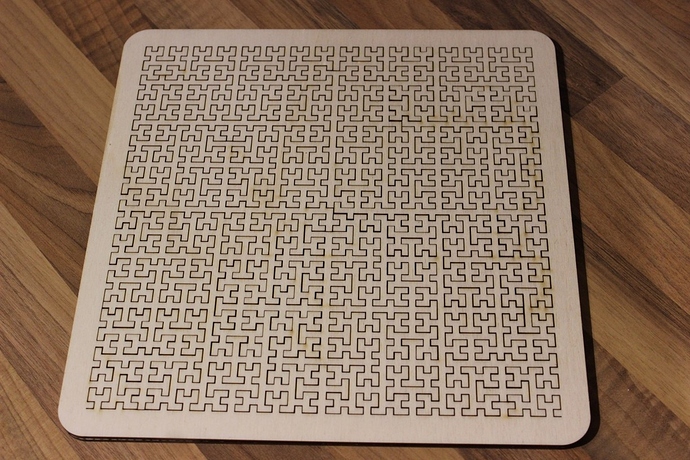 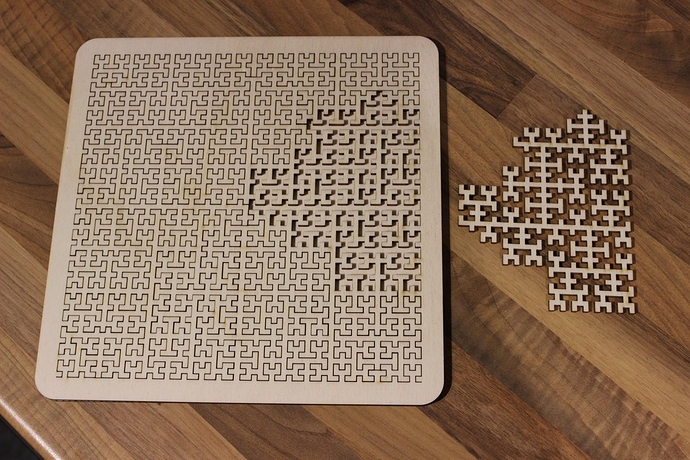 Guessing you can find similar patterns online to trace/recreate/tweak to make the pieces, so aside from the design I’m betting something like this would be pretty simple to make: take 2 boards, cut the pieces out of one & adhere the remaining frame to the second board as a base & you’re done. Make it even more confusing by etching another pattern over the top before you cut so when the pieces are out you still can’t tell where anything is supposed to go.

You mean etch a pattern on the pieces you cut to eventually be the puzzle?

That would make it easier, since then you have lines to match up between pieces, giving another indication of which ones go where.

Leaving it completely plain makes the puzzle considerably more devious. Which is why some people solve normal puzzles with the image face down, so they do it by shape alone.

@ccox At first I agreed with @jacobturner about the shape not being fractal, but now I see you’re right. Even the most “fractal looking” images we see, like the Mandelbrot set, are really just approximations of fractals, limited by the pixel resolution of the imaging device.

Well, I haven’t run into the space filling curves thing before.

For me, the informal fractal definition is self-similarity upon zoom, and infinite zoom. The formal definition is that scaling the perimeter results in a non-integer power in the scaling factor for the area.

But… researching a bit, it would seem there is no agreed upon full definition. So I’m just being an ass.

Trying the hilbert puzzle right now in pizza box cardboard. Going to see how well that holds up.

Fractals are indeed a tricky concept. At the risk of moving this thread too far off topic, here is a mind-bending thought. I made this cover story image for Science News back in '87: http://designbyalgorithm.com/wp-content/uploads/2014/11/Science-News-cover.jpg
The four colors represent four “basins of attraction.” Get this–ALL FOUR colors meet at EVERY POINT on the boundary between the four basins of attraction! Wrap you head around that one!

The Newton method to find roots?

My second design is based on the Gosper curve and is much more challenging. Turns out having friends round for Christmas day allowed me to do some awesome laser cutting. 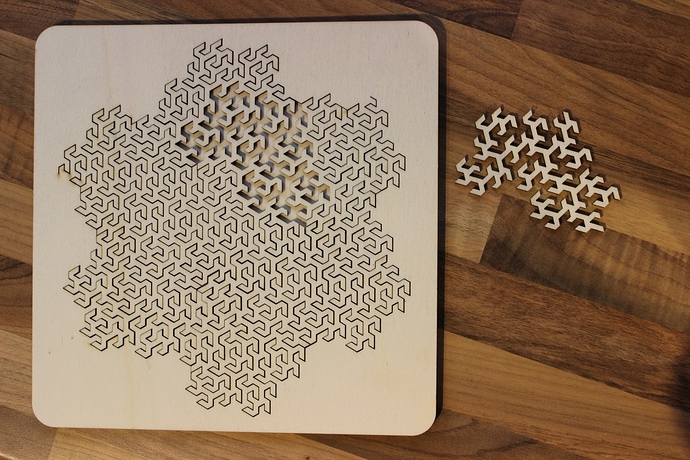 That is fantastic! Would you be willing to share that file too? I’d love to cut one out!

Never got back to posting on here. I have cut the square file which @m_raynsford uploaded a few times now. Always on a pizza box.

Having an image on the thing you cut before making the puzzle reduces the complexity to an amazing extent. Without that, my kids would have killed me for suggesting they try to put the puzzle together.

And having a solid backing is VERY highly recommended. These guys are a pain to move around without it.

I did a third puzzle as well, never got round to putting them in my web shop. Too many things to make, not enough time to make money

I bundled all 3 puzzles into 1 svg file, credit where credit is due please and all that
svg file 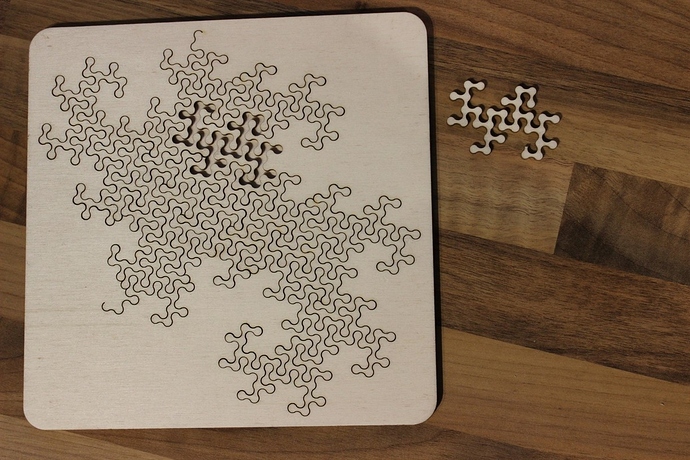 These are fantastic and already a huge hit around the office. Thanks for sharing!

How did you go about making the design? I tried doing something similar with the Dragon’s Curve fractal, but I wasn’t able to create a sensible puzzle easily. It didn’t add up into a set of removable shapes all that well…

I started with the curve, I closed off one entrance and then found a repeating section and then closed it off. I ‘cut’ it out as a shape and moved it over the next repeating section. I closed the next section at a slightly different point (because I like to be awkward) rinse and repeat. You always end up with a few straggly parts and I had 3 iterations of the dragon curve to get to something useable.