Lasering in the Desert

Hey, remember when heat was being discussed and I was all “Hey, I laser in the desert. Is this going to be an issue?” Well, funny story that… My office is too hot. It’s only 102F outside today (summers usually see 120F here in Phoenix), and my a/c is only able to drop the temperature to 80-ish.

This is my view: 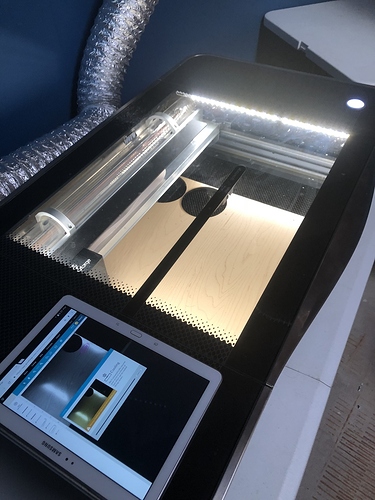 We’ve been “cooling” for over an hour now, and nary a laser has fired. I even have a fan pointed directly at it, I’ve opened it up and run a fan in before trying to start, and I’ve physically moved the laser as close to the a/c vent as possible.

I have a couple orders to pump out (the first ones since winter). Help?

Basic or pro? The trick is that you need to figure out how to get the coolant down to around 75 degrees. With the pro, it can take the 81 degree air and cool it to 75 or so and use that to cool the coolant. In a basic, all you’ve got is the ambient air and 80 degree air won’t cool the coolant any farther than 80 degrees.

There was someone who used a wire shelf table and they put a portable cooler under it pointing to the lower right of the forge.
Others have fabricated igloo type boxes around it to keep cooling in area.

Like the wire shelf idea. Looked sound and did not seem like a total hack. Cannot find the link though - sorry.

here is one of the boxes
https://community.glowforge.com/t/stupid-but-works-for-alert-cooling/19115

Hate to say it, but if that is a Basic, you need to get the temperature around the machine down to below 75°F or it’s going to be stuck in a cooling pause for a very long time.

Does the temperature drop at night? You might try running your jobs a little bit later. Or maybe disconnect the vent hose when it’s not in use so that the hot air doesn’t migrate up through the hose into the machine during the day when it’s not in use.

Maybe adding an additional portable air conditioner would help. Or directing the cold air from the AC vent directly towards the room (closing off other vents in the house and opening that one full and closing the door).

This was a creative solution from another customer:

I would probably try to rig up a long dryer hose coming out of the vent instead of the cardboard pipe. Either way, it will direct the cold air towards the machine air intake on the lower right hand side though, which is what you want to try to pull off somehow.

I’m going to shift your post to the Beyond the Manual section so other customers can share their solutions. Support isn’t allowed to make non-OEM suggestions for venting.

Over heating problem Problems and Support

Basic and Plus units have an operating temperature range of 60°F - 75°F. And running the machine causes it to heat up a few degrees. So if you can lower the temperature by a few degrees around it, it will probably operate without the pauses for cooling as frequently. You can also direct a fan at the air intake on the right side under the machine to blow the cooler air underneath. Might help.

I’m just a few hours away from you at Lake Havasu.

I havent had any issues with a Basic until last week when the intake duct on my AC unit fell off inside the attic and the house was getting up to 80-81 degrees.

Otherwise we’re usually running 76-78 degrees here and never an issue with the glowforge.

Sounds like you need to get it a bit cooler, maybe use the portable air conditioner units like already mentioned or maybe even a small evaporative cooler.

It’s a Pro and the ambient temperature is 82.

Oh that’s good…get the temp down consistently around the machine to 81° or less and it should be fine. (Much less of a mountain to climb there.)

So, I’m running out of my ~80 degree garage recently and I had the same issue. Fan just ran as though it was cooling for a solid 30+ minutes. I found that when I stopped the cut by opening the lid and restarted the cut, the laser instantly started cutting.

Not certain if it was stuck on cool mode or what, but was surprised how it cut the second try.

It might be that a stop during a job requires the temperature to drop a little bit more than just below the cut off point. You don’t want the machine to be starting/stopping/starting in real short order, generally. That is a little bit less of a concern with a laser cutter starting/stopping is less costly than, say, starting/stopping a water jet, but GF may have adopted a similar implementation simply because it is pretty standard.

So, when you started a new job, that starts with no prior history.

Regardless of GF level it’s a crying shame they cheaped out on the power supply and cooling system for the tube. 75* for basic and 81* for pro isn’t all that reasonable given average ambient temps across much of the world. Solutions have been posted elsewhere already (portable ac units, dedicated duct work for central air to cool it, etc etc). Still rather hokey and quite a kludge to get a several thousand dollar machine to function.

It’s an all too obvious reminder that it’s a kickstarter-grade device and not a commercial production unit.

cheaped out on the power supply

Here is the typical summer weather I deal with (from today)… and no hokey or kludgy fixes or hacks. 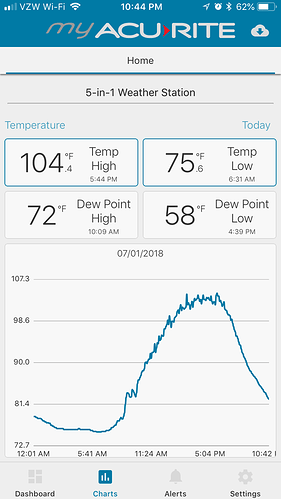 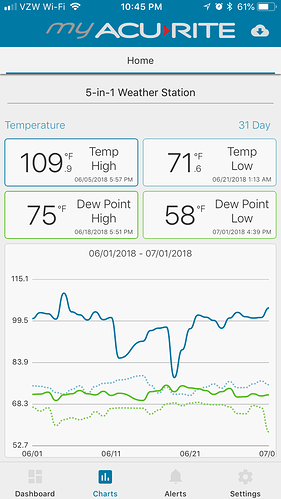 Every manufacturer has temp guidelines. And most of the people I see posting about running their lasers at 95 degrees plus in their workshops are exceeding the manufacturers recommendations. They warn against having too large of a delta between your ambient and chilled temps. They just don’t stop you.

GF has always been upfront about people buying the right laser for them and not just trying to get them to buy a Glowforge.

Oh that’s good…get the temp down consistently around the machine to 81° or less and it should be fine. (Much less of a mountain to climb there.)

But! Your initial link helped us figure out that if we raised the unit off the table with 2x4s, it did allow more of the vented cool air to flow under the unit towards the sensor (Why is it under the unit?? lol Heat rises!) and we were able to run until about 10am this morning. So, thank you!

I’m hoping when the air filters finally get shipped that it’ll provide cooling in that area of the unit without risers, but I guess we’ll see.

I found that when I stopped the cut by opening the lid and restarted the cut, the laser instantly started cutting.

Yeah, see, if it had started the cut, I would have just let it do its thing. It didn’t even start, despite unplugging, relocating, filling full of cool air, etc.

It might be that a stop during a job requires the temperature to drop a little bit more than just below the cut off point.

Again, there was no starting, only cooling. That was kind of the whole problem I was encountering, which is why this started in the Problems & Troubleshooting section.

It’s an all too obvious reminder that it’s a kickstarter-grade device and not a commercial production unit.

Having run commercial production units for decades as well as hobby units, I will disagree with you. There are a lot of features my commercial units managed better, and I still plan on getting a commercial unit later, but Glowforges are leaps and bounds better than any China made unit or hobby laser I have used previously. My only current complaints are about not being able to save my own settings, not being able to easily cut multiples of a single design or arrange them cleanly, the lack of a pause button, and the lack of a rotary. Oh, and, well, I guess not being able to turn off the heat sensor, but our work arounds fixed that.

And most of the people I see posting about running their lasers at 95 degrees plus in their workshops are exceeding the manufacturers recommendations. They warn against having too large of a delta between your ambient and chilled temps. They just don’t stop you.

True enough. And there is always an ambient temperature & workload induced machine temp rise that cannot be reasonaby (e.g for decent $) mitigated.

The Redsail has a commercial chiller designed for 120W machines. The Redsail is 60W. I’ve had to set the machine config to shutdown the laser at 30C from the chiller. In 90F ambient temps the chiller can’t keep up with the heat the machine is generating and the tube starts to go flaky. When it’s making frying bacon sounds you know you need to turn it off

I probably get more sustained use than a 120W laser would get but even at half the power, it can still overwhelm the chiller. It’s just physics. Seventy-five percent of the power fed to a laser is dumped out as heat. Adding a 15,000 btu/hr a/c unit can fix the problem but that’s another box as big as the GF and another power circuit & exhaust.

I was extremely frustrated last year with the PRU - lost 3 weeks where I couldn’t use it in my basement. This year the Pro is doing okay - it does a pre-job cooling cycle (4 min) when the temps in the room are 78 but then it’ll run an hour long job without a pause.

As you are in Phoenix it is my guess that a home made swamp box would do a good job as long as the humidity was below 30%. Unlike AC systems that need to expel the heated air the swamp box only needs to keep a good supply of water and changing the water as minerals build up.

I think there are some commercial private (as in just for one person) cooling units available and I am sure that the wood shavings used in household swamp boxes are available for those who still have them.

Has anyone tried creating a small (low) box for the unit to sit on and filling the box with ice packs? Obviously that’s not going to work if you need radical cooling, but for a few degrees…

I mentioned using dry ice a while back as a means of retarding flames, It would be a great means of radical cooling as well if the need made it worth it or if you had an inexpensive source.

a home made swamp box would do a good job as long as the humidity was below 30%.

Yeah, we made a bucket swamp cooler with a power blower and that didn’t do anything except raise the humidity level from 10% to 24%. It’s just too dang hot and my a/c system can’t keep up. Lifting it off the table helped immensely, though!

Dry ice is more than I want to deal with. I figured old-school ice packs were easy to come by and reusable. If I needed something that extreme, I’d just invest in a portable AC unit. I don’t have a GF at home yet. My office has AC, but it’s cooling the entire floor of the house so I don’t run it really high. It’s usually at around 72 in here. That might start getting iffy for a Basic unit if it’s really hot out. I was just trying to think of simple ways to bring it down a couple of degrees.

The cheapjack portable AC units aren’t that expensive (especially when they go on sale), and it’s really easy to bodge ducting onto their output (says the guy who accidentally built a solar oven for a bedroom).