Really excited to see what everyone is making here so thought I would add my project.

I am creating a tabletop game system codenamed the Game Lantern. Sometimes I describe it as an “ancient game console”.

It’s a wooden lantern with paper-cut panels and an LED light inside. Shadow patterns cast from the removable panels project the game boards, so different games/levels can be loaded into the lantern by sliding in new panels.
www.thegamelantern.com 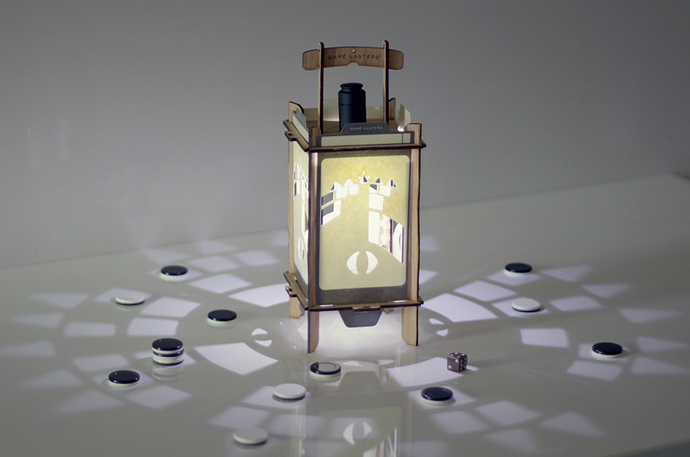 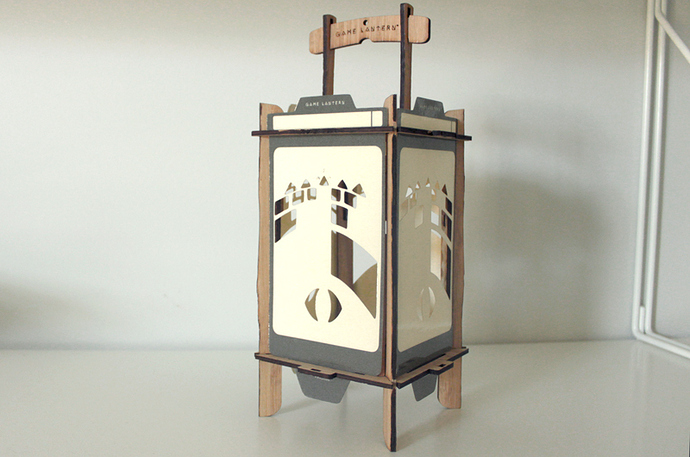 The lantern panels are 3 mil laminated paper which I cut with a KnK Zing. I look forward to having a GF to cut all material on one machine (including game pieces).

I use iDraw for all my line work.

You may note the rough edges on the legs in the above image. I had to quickly update the design one day with an X-Acto knife, as I was unable to wait for Ponoko to mail a new one. I love that I will soon be able to just draw a line to easily make such a (cleaner) cut if needed—or just fix the design and make a new cut on the spot!

This is so clever! I think I need it in my life once you start producing them.

Thanks @Whitfry - I’ll be sure to post an update here when that happens (there is also a sign-up on the site for anyone who would like to be notified about the progress).

Mate, LOOOONG term gamer here… that is a brilliant idea!
Well done. I will be watching with interest

I am curious what kind of games you make for this.

Looking at the image, it seems a kind of round Othello type game, or any variation of checkers approaches.

But being a long time PnP player… I can see myself using this idea to do floor layouts for a sprawling tower adventure.

Genius! A new post for our internal projects-we-love lost.

I really appreciate the feedback—helps me to know what reads well at this early stage.

@jacobturner My background is in videogame design. I built the lantern to challenge myself as a designer to explore all genres. A sprawling tower adventure would work really well! Maybe you could even shuffle a big “deck of panels” for a small taste of procedurally-generated maps.

The demo game I have now is an oracle-strategy experiment—think Ouija meets Castle Panic. The next game is more of an RPG in-a-box (probably set in the Oz universe). The lantern is good at “loading levels”, so you can imagine “overworld maps” leading to a series of dungeons. Point is it won’t just be abstract strategy games, but each will feature mechanics unique to this system (shadow and light, panel switching, etc)

Thanks again—your feedback definitely inspires me to work on showing players the variety of games possible ASAP (a console is only as good as the games on it!)

I will also post free panel templates for people to download. I hope folks will be inspired to try their hand at making their own games for the lantern, too.

I have seen many projection mapping programs which can be used to show light layouts which are not circular. You could use this to have a panel just be a giant dragon, or to make classic square shaped rooms. The panels themselves will then look a bit odd, but as long as the lantern is on a flat table, the light image will be spectacular.

Absolutely! That is how this board was made - it’s very simple anamorphosis where I just use Photoshop to perspective-skew the panel images before cutting them out.

The primary “limitation” is that the lantern legs cast four thin “shadow-seams” on a board, but that is easy enough to work into designs (that and I have found cut-out panels work much better than, say, panels printed onto a clear medium like acetate- so this limits the line-work style a little). I think you bring up another excellent point that whatever board I create next really should show off this feature.

I tried a slightly more complex mapping in an earlier prototype- where the lantern was actually a cylinder, so the image was cut from one sheet of paper. That version removed the shadow-seams, but just didn’t offer the solid functionality of this parallelepiped design.

thanks again - exciting to see the lantern already sparking other imaginations!

I don’t suppose you’d share the names of these programs? Some of the projects I have in mind would greatly benefit from something like that instead of a lot of trial and error practice.

I never tried any of those mapping programs myself - so not sure what they are. Since I used 3DS Max extensively in videogame development, that is the software I used when I did my cylindrical mapping experiments.

I have stumbled across some before, thought about how nifty they were, but had no use case for it (hence being vague before about what programs there are).

Essentially, it is anamorphic imaging in reverse. But I am not sure the proper term for it. Perspective shifting in Photoshop would seem like the easiest, so long as you happen to have the software (and at ~$50 a month, getting it temporarily is certainly feasible, just plan everything you want in advance to make the most of that month)

Yes, and if you are doing something as basic as perspective/skewing - it appears you could try free software like Gimp:
http://docs.gimp.org/en/gimp-tool-perspective.html
or even Inkscape:
http://www.built-to-spec.com/blog/2011/01/02/quick-inkscape-tutorial-perspective-transforms/

This is really awesome, I have never heard or even thought about such a thing. I’m going to watch this with great interest! Thank you for sharing!

This is so cool! I want to play this at our game nights.

Here is an image of a laser cut from one of the earlier prototypes (I used the online service Ponoko to do the cutting).

Since this pic the design has changed a bit and I will be cutting it differently for production, but thought it might be relevant to share with you all how the lantern is being cut: 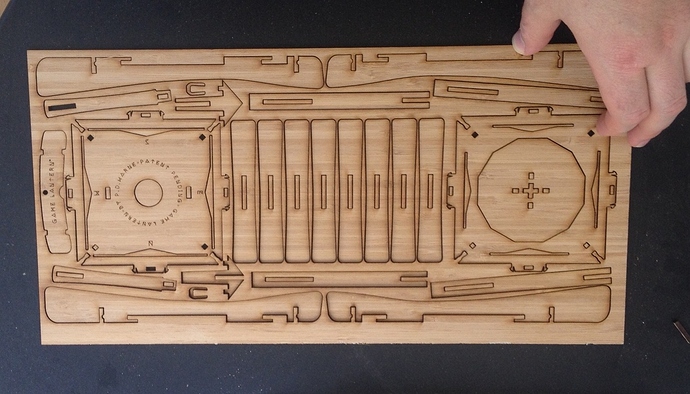 Just wanted to update with this little video teaser of the game lantern in action to give anyone curious a better sense of it:

If you happen to be a games person attending PAX east in Boston, Now Play This in London, or Indiecade East in NYC, you’ll be able to play the Larklamp prototype at any of those events (or if you are in Montreal, I’m now hosting a monthly playtest).

More on the shoptalk tip, I picked up this KnK Force (Kickstarter). It has a rotary attachment so I can prototype as I need until my Glowforge arrives: 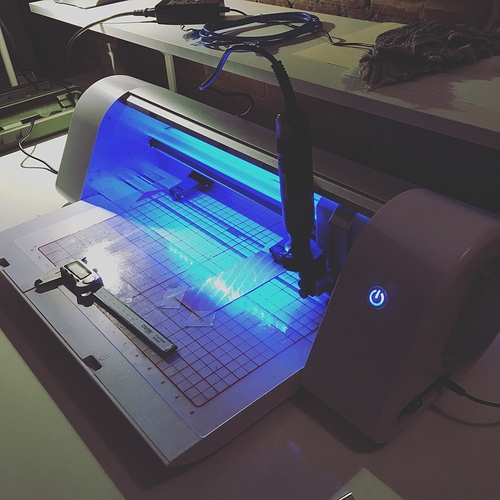 Still getting the Force up to speed, but so far it appears to be doing the trick on cutting and etching my 3.x mm bamboo ply (in the picture is a copper etching test, which pushed my learning limits) - so looks like I might be able to write Ponoko out of the picture for now which will really speed up prototyping/keep me busy and patient until June.