Hello everyone,
I just want to ask, I can cut a magnet sheet with my GF?

Avery Magnet Sheets Everything Else

Not sure what this is made from, but I used to use this stuff all the time when I was airbrushing. I used to print it on a plotter/cutter “Avery Magnet Sheets”

There’s this too: Laserbits Magnetic Sheets

I haven’t checked out the magnet sheet specifically, but if Laserbits says it’s cuttable on a 40w CO2, you should be in good shape.

Last I remember, you could cut some magnet sheets. The only down side is that it weakens some of the magnet, so it won’t be as strong.

it weakens some of the magnet, so it won’t be as strong.

This is essentially what I was told by a customer service rep for Magnum Magnetics.

Heat can demagnetize an object. Magnets work by having all the atoms in a substance lined up the same direction, and heat causes them to move around and get out of alignment.

If you run into trouble with this, it might be best to cut a few lines at a time, wait for the magnet to cool down, and then make another cut. Or perhaps a heat sink (e.g., a slab of copper) underneath the magnet could help.

I’d expect this issue to come up most often when cutting small shapes (e.g., narrow strips)

And it is a Halbach array to boot!

Actually, I seem to remember seeing somewhere on this forum months ago that the laser does not really heat up the surrounding material much at all, because it is focused on such a small area at a time (which is generally vaporized, rather than burned) and then moves on to a new area very quickly. I know they just reach in and grab the parts as soon as it is done all the time in the videos. I suspect this magnetic sheet stuff cuts really easily, so the demagnetization should be unnoticeable in practice - unless, as @tim1724 mentioned above, you were cutting extremely thin strips.

Those rubbery sheet magnets are made with tiny particles of ferrite magnet suspended in the plastic. I doubt that you could get the surrounding plastic hot enough to demagnetize the particles without the whole thing melting.

As @gernreich says, they are magnetized in alternating stripes so it might be that if you cut them in the “wrong” direction the result is weaker. You could do a simple test by cutting two similar shapes at right angles to each and see which is stronger.

Uh no, not hardly! I am not even convinced that they do get weaker when cut. It seems to me that the strength is going to be proportional in some ratio to the area. If it is a linear function than they don’t really get “weaker” they just get smaller, but if it is non-linear then it might matter. Only science could tell…

I’m also curious about marking/engraving the magnetic sheet without cutting though, and whether that will affect it differently. The stuff I use for vehicle magnets comes on a roll, and is matte white on the outside (non-magnetic) face. Thickness is 30 mil altogether, and the white layer looks to be 2 - 5 mil. So I think I should be fine in engraving crisp black text, and there may be potential for color variation (browning) within the white layer.
They are meant to go onto cars, so if the magnetic force is weakened by the laser, the magnet could potentially fly off of a car at speed.
Does anybody here have access to a wind-tunnel?

We are wandering into deep water here, but because of the way the sheets are designed, it might be worse to just remove part of the magnetic material than all of it (i.e. engraving versus cutting). Check out this link about the Halbach arrays that @gernreich mentioned: Halbach array

They are designed to concentrate the magnetic flux on one side of the sheet so it sticks more strongly. If you remove part of the configuration, the magnets that are left may actually act to decrease the available sticking power. Or not, depending upon which bits you remove. Of course in the end if you have a big sheet and a few engraved words, none of this detail may matter at all.

Make some to test and then drive real fast?

Make some to test and then drive real fast?

I’m not too far from Sonoma Raceway. Might be able to get ahold of a race-ready 911 turbo from a friend. I like this idea… For science!

Just sent this inquiry to Johnson Plastics regarding the magnetic sheet I received. I’m a bit concerned.

I purchased this item: https://www.johnsonplastics.com/12-x-24-025-magnetic-sheet-with-adhesive (SUS225). What I received does not match what is described, and doesn’t make any sense. Unlike the photo, which depicts a white masking, mine has a shiny black material on the back, which is almost impossible to remove. When peeled up, it appears to be made of a metal foil, and it takes the adhesive with it. I don’t understand how I am meant to use this product.

In addition, laser cutting it produces a shower of sparks, possibly due to the metal foil. The sheet, and my laser cutter, and I am now covered in an irritating metallic dust and I’m concerned about the safety of using this item as described.

Can you provide any assistance? Is it possible this was substituted with a different product?

Here are some pictures. As I described, there’s a dull side which is magnetic, a shiny side which is not, and with great effort it’s possible to separate the two, revealing that the back is some kind of foil. Removing it does not leave any adhesive on the magnet, and usually tears it in the process.

My other theory is that this is the way refrigerator magnets are constructed, and that there’s supposed to be a further adhesive backing on the back of the back, that they forgot to put on. Since I could just cut this as-is and glue it onto my piece.

But due to the aforementioned metal dust, I’m really not keen to cut any more of this stuff. 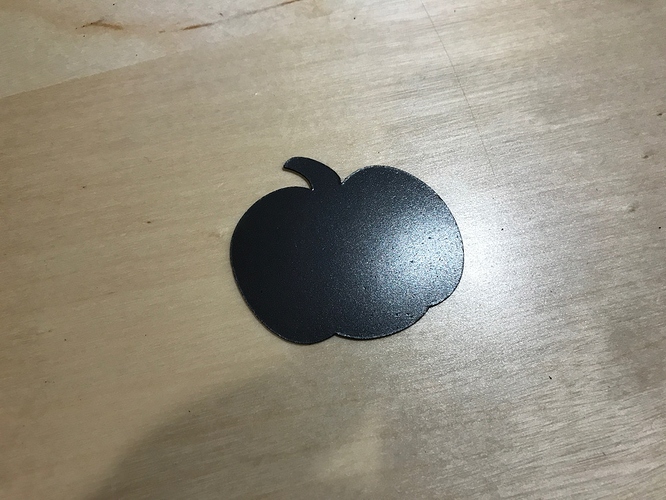 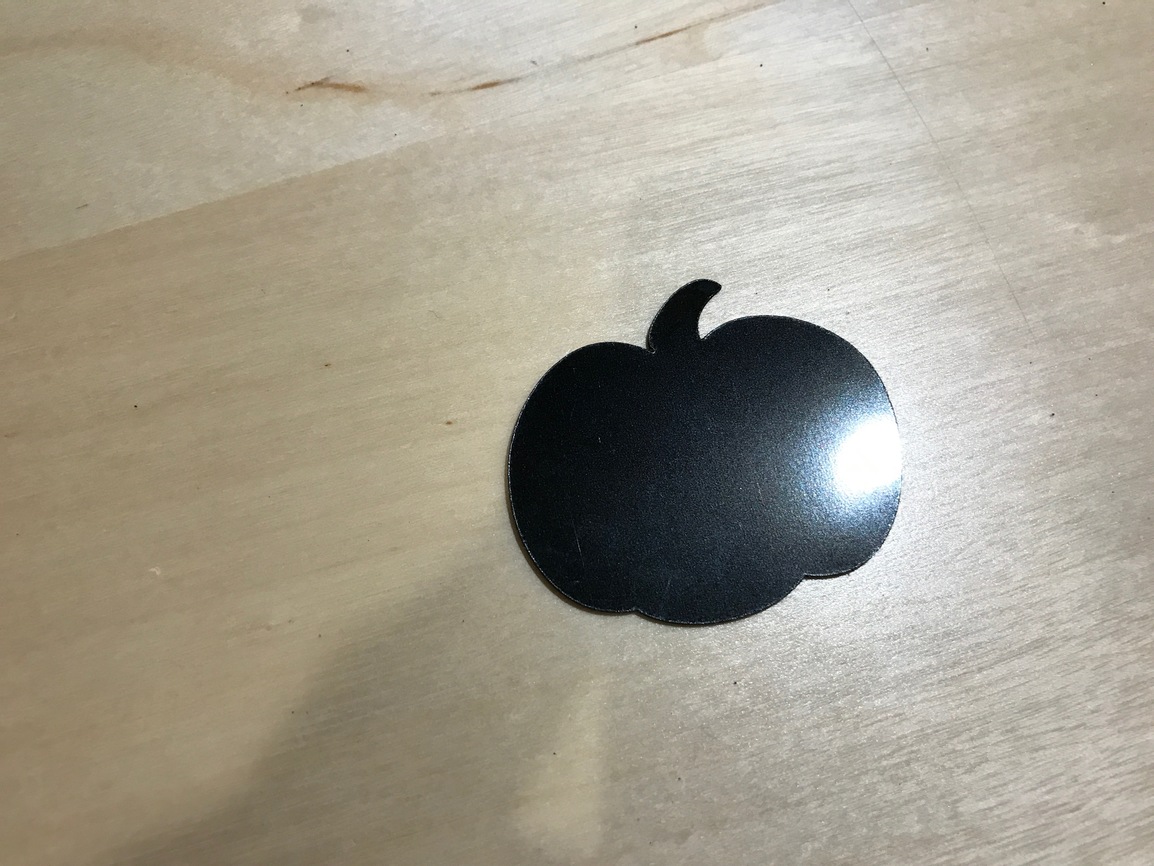 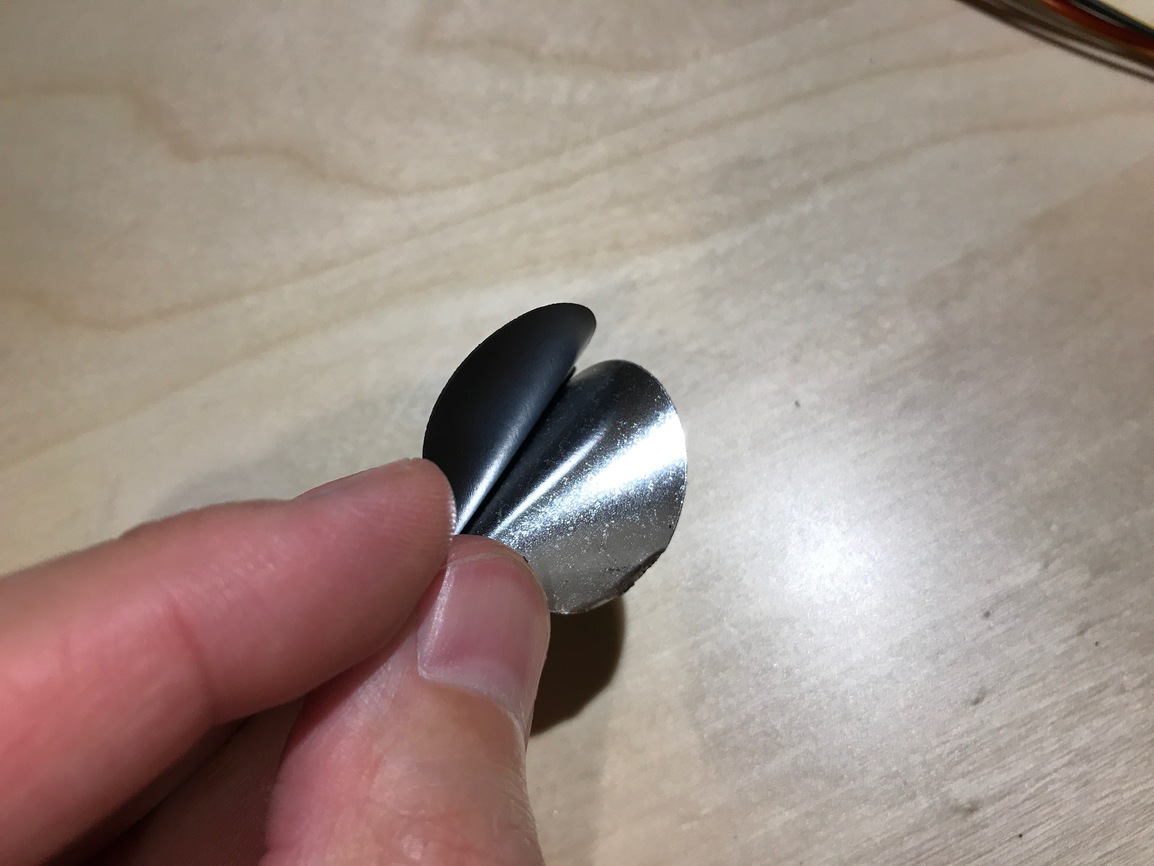 By the description on their website it appears you attach the magnetic material to other substrates (ie: wood, acrylic, etc) in order to make THEM into magnetic items. Peel the masking off, apply the mag sheet to another material, cut and use.

That’s the description on their web site and that’s what I got it for. I would like to see anyone use the item I received in that manner. Peel what masking off? Apply how? Was my description of the problem unclear?

Oooooh I wonder if they sent you one of the other laser mag products that are multiple ply, that you engrave away the top surface to reveal another color underneath.

Hmm, interesting. It does seem like whatever they sent me isn’t the right thing. The layers seem to be:

It peels, with great difficulty, at the line (in a way that suggests it’s not meant to come apart), leaving a glue-less magnet and a non-magnetic sticky silver foil with a black backing. The only way I could imagine engraving this would be to blast it from the “bottom” of my diagram, exposing the foil. Then you could stick it on something with the magnet. But they don’t seem to sell black/silver (just the opposite).

The other possibility, which is my current best guess, is that they just left off a step:

That foil sandwich that I peeled apart may just be part of the internal structure, to concentrate the magnetism to one side and/or give the backing adhesive something better to stick to.

Anyway, I’ll update this when I hear back from Johnson Plastics.