You guys are incredible - you change the rules and spect to accommodate your own engineering issues. When I (we all) bought our Glowforge, the printable area was stated as 12 x 20.

Recently, one of your people explained that in reality it was 11 x 19.5.

THAT, TOO, IT NOT THE TRUTH

I’d not had reason to test this until now that I’m trying to print something that is 18.25" across. I don’t remember it being that small when I first got it - and I suspect you’re changing that with software updates. And I get the no artwork error, because it violates the left or right markers that define the print area. 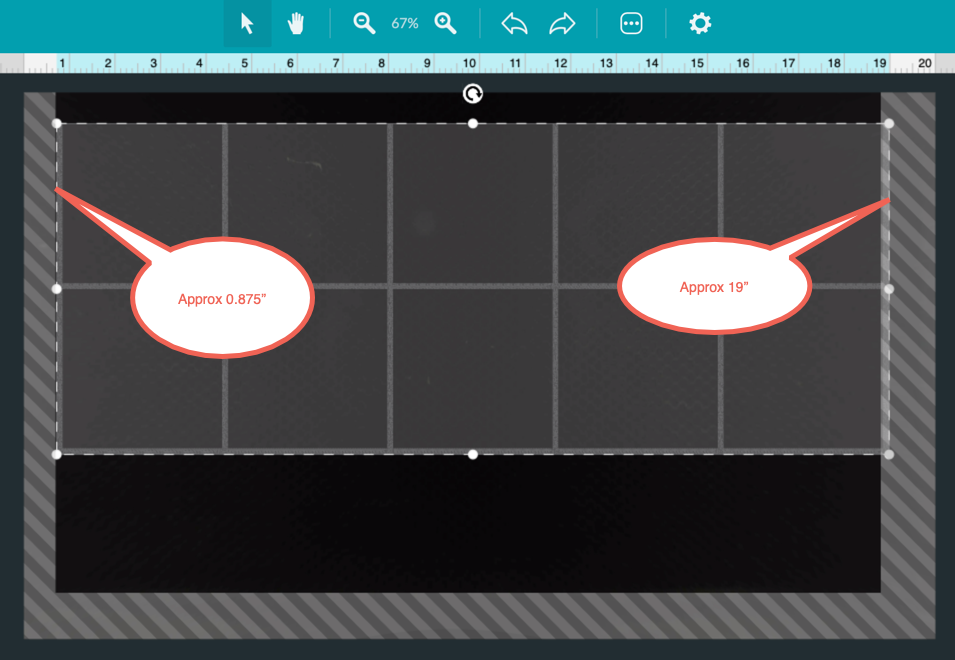 I think you are being a little unfair.

The usable area was originally designed to be 12x20 inches. During development of the project it was found that the deceleration of the laser head required some of that space, so the usable area was updated. Keep in mind that this change was made before the product was released, and the usable area dimensions change has been known for at least two years, and the changes were documented to the users.

This is fully and completely documented on this forum at the very least: Specs update

Maximum cutting area is slightly less than 11" x 19.5". Maximum engravable area is 18.5" and up depending on the engraving speed being used, to allow for head deceleration at the sides. (Known thing.)

If you need to increase the width of the engravable area on the bed, slow down the speed being used and reduce power to compensate.

Actually, as you can see in the image I sent you, the maximum engravable width is not 18.5”. It is more like 18”. I read many of the pre-release materials and somehow missed that one.

Defensiveness aside, there is an upside. You guys can cut down the proofgrade supplies and save some cost. Because there is no apparent way to move the target around accurately to use the entire 12x20. Or perhaps there is and that info is also buried in the forum somewhere.

The problem with the forum is that there are a lot of people who jump in with their two cent sho, in fact, don’t know what they’re talking about. It is left to the reader to sort those from the good info.

You might have misunderstood what I was saying. If you adjust the speeds you are using, you can use the entire approximate 19.45" wide area for engraving. Slow the engrave speed down, and lower the power. The engravable area available to you increases. (Those hashmarked no-go zones get much narrower.)

Formula for Engravable Bounding Box Everything Else

But there haven’t been any changes made to the available bed size lately. Same as it’s been for the last couple of years.

Yeah, Jules, after reading through your last note and thinking about it, I figured out that I could do that and got my design to fit. I ran it at speed 800 and 95% power. It is dark enough.

Thanks for following up.

I found myself with that same problem and managed to squeeze in the last piece by slowing down the speed, the vertical distance is actually a hair under 11 inches as I discovered by cutting down a 12 x 20 board with four floating lines stretched and moved to the maximum values.

As there was not much left I ended up with a right angle that I can place in the machine to place any smaller piece and know it is within the cutting area. I also moved it to engrave a scale as well.

When you are cutting it is a good idea to leave a small space at all the edges so a bed pin can hold the material in place as it is being cut.

I know where you’re coming from. I just found out why my house is a wreck - 2x4s are actually 1.5"x3.5"! Who knew? And 1x6 isn’t either. 3/4" plywood is 11/16". That’s why nothing I build comes out right. How do we stop this from continuing to suck us in? I complained but the guy said something about “nominal sizes” and other blah blah blah but they’re all just lying.

While I appreciate your humor, I’m still pissed. When one is using a precise instrument as the Glowforge is supposed to be, one should expect that their specifications are true. I settled for the 12x20 because of some of the other great features this system offered. They’re already nearly 2 years late on their Glowforge filter. And now they try to appease me by saying that you can still put 12x20 materials in the unit, but that there are some fairly wide margins that are unprintable - or that I will have to learn how to move it around accurately to use them. The fact is that they got caught with their shorts down and are now trying to spin it to be OK. Had they known about the need to slow down the head they could have made the travel a bit larger … it just escaped them during the design and prototype stages. Sigh.

This is a very interesting read and thank you all for your very precise details.

Chiming in as someone from the Paper/Print industry…why not move to board sizes for PG materials that match most Laser Printers?
11" x 17" aka Tabloid size…abd 12" x 18" is also a standard size.
Spacers could be cut (or provided with new orders of board this size) to squeeze the new size boards into places on left and right in crumb tray.
Just food for thought ; )

now they try to appease me

now trying to spin it to be OK

The spec page has listed the max cutting dimensions since October 9th, 2016. Recalling that they’ve said from day one that specifications were subject to change, here’s a little history:

So… since production models began shipping, the max cutting area has changed twice, each time to the better.

Btw, every change listed above was hashed and rehashed ad nauseum in the fora. I realize that we’re not going to agree on this in any form or fashion, but my point is that the max cutting size has been available for almost three years, so I just don’t buy the “now they’re screwing me” argument. Obviously, YMMV.

I know as a pre-order customer that I actually had it listed out on a page that I had to acknowledge and agree to, to initiate my shipment.

Last I checked with Dan, a week or two ago, the plan is still to have the 20.5” wide cutting area, which would be another upgrade from the shipping specs.

Yes, I had to sign off on the specs before receiving my production unit as well. I’m looking forward to further improvements.

Excuse me? The spec on 10/9/2016 was 11.5x20.4, by your own words in the memo you just sent. When I tried something that actually pushed that was the other day and the hash barriers and error message “no artwork” wouldn’t let me cut anything greater than 11x18. I later found out here on the forum that if I slow it down, I can get back to full 19, but I suspect that information was NOT in the spec sheet since 10/9/2016. Hence “Now”!

You’re in-the-know. We find these things out when we hit the barriers, some of them have shown up in recent updates. When we tell you what we see and you take a defensive stand, what we hear from you is very negative and disheartening. Kind of like, “If you knew what we know, you wouldn’t ask such stupid questions.”

See – I said we weren’t going to agree on this.

So you tried to cut something according to the 2016 specs and are upset that that it didn’t work ~ 3 years later after two changes? Ok.

I read the forums and the GF support pages when I need to understand something, so yeah, I guess I am “in the know” as much as anyone else that’s invested the time and effort to understand the changing capabilities of the GF. Shame on me. Shame. Shame!

When we tell you what we see and you take a defensive stand, what we hear from you is very negative and disheartening. Kind of like, “If you knew what we know, you wouldn’t ask such stupid questions.”

Not my intent in any way – I have no control over how someone else interprets my text. I’m sure that everyone else saw nothing but positive intent in your OP…

And Now! I’m beginning to see your brilliance!

Have a great day.

Something to keep in mind: all the replies you have received are from other Glowforge users, not from Glowforge employees. From the way you are responding, I don’t know that you are aware of this. Please know that your first response, even in Problems and Support, is likely to be another user. GF employees and staff are designated so and will often not chime in unless there is a problem that users can’t solve. Temper your responses accordingly and you will get more willing help from other users.

I appreciate your attitude and response. My one pet peeve with forums in general is that often other users do chime in without really understand the problem. I have received a lot of “answers” of the years that simply were not applicable, or were incomplete and have spent hours weeding through them. I realize that comes with the territory, but it is still frustrating.

But I will keep your thought in mind.

If you don’t want to get user assistance, email Glowforge directly and don’t post here.

The users who will attempt to assist on this forum are extremely knowledgeable and will often solve your issue or at least give you the initial troubleshooting steps to lessen the back and forth with Glowforge. It is very rare that you will get any wrong information on this specific topic area.