Miniature book you can read!

I think I fell in love one vacation in Italy in the late ’60’s and agonizing about my (sparse) souvenir money and how best to spend it. When I stumbled on one of these, that was it. 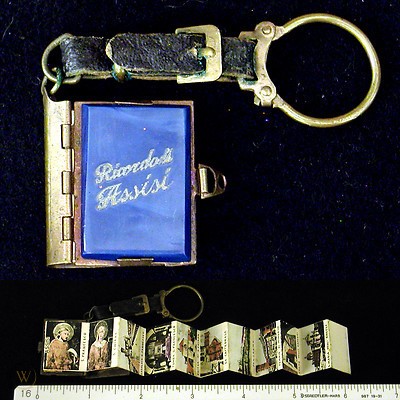 They usually held a strip of tightly folded up mini photo cards of whatever tourist spot you were in. The next few years, I would collect those with a passion. In school I would not only write my own short stories, but attempt to make it into a mini booklet, with small handwriting and stitching. In the ’70’s my mini booklets would be a little bigger, but I remember picking up a few no bigger than 3” - with gold edges no less!

In mid 2000 I found Paperminis, and I made a whole library load full of books - in a room box the size of a shoe box - most of which have pages with text and pictures. 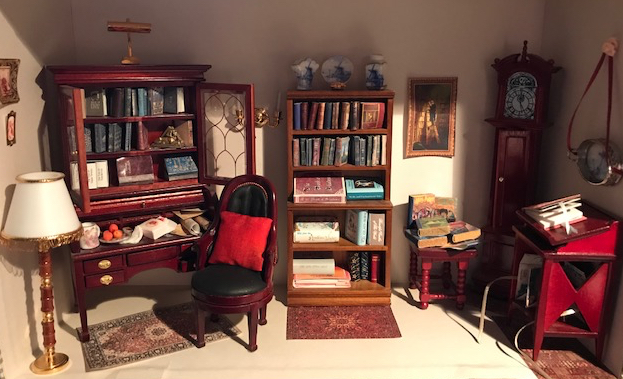 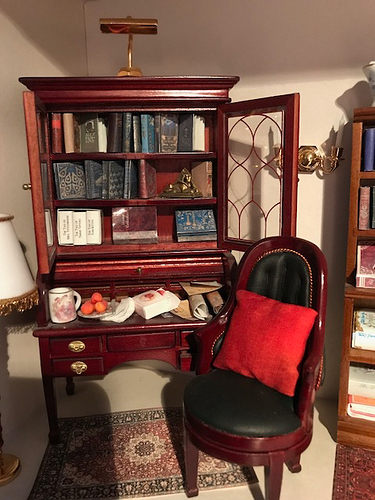 So it should come as now surprise I’ve been plotting how to accomplish making miniature books with the Glowforge since I bought mine more than two years ago now. I have some mobility limitations so sewing paper spine or leather was out.

First I worked on this notebook with a living hinge, that was a start.

Made a living hinge cover for a small notebook with some tweaking after using https://www.festi.info/boxes.py/ Designed a simple closure based on the

catalog desktop tool carousel (of which I’ve made several). The engravings are downloaded and the corners are modified from OpenClipart, by GDJ. I bought a set of these small notebooks on Amazon and took the covers off: http://a.co/d/0GaU0ro. [IMG_2354] [IMG_2355] [IMG_2361] I did my covers on

Then covering a block with engraved leather looks ok too, but no readable pages.

Miniature no-sew leather Made on a Glowforge

Wanted to work more with leather, but can’t sew anymore due to arthritis. Was encouraged by @Jae’s post: Which made me think that I could come up with sew-less (not soulless) leather projects. [IMG_2575] Starting small as you can see. For size, an extra fine point Uni-Posca pen (they’re smaller than the fine point ones). For the purslet keychain I googled for a basic pattern and changed it quite a bit. I added silver embellishments to the brown booklet, which has a thick piece of gold e…

Finally, I had not one, but two lightbulb moments…

Engraving on double sided cardstock to reveal the white.

Engraved cardstock fun times Made on a Glowforge

I had a pack of double-sided white-core cardstock from ages ago and never got around to trying it out. Well, I’ve tried it now, an I love the result! [image] The paper has a slight woven tooth to it, which comes through beautifully when lasered. [image] Really pleased with the quality. Hard to believe this was made with a glowforge. [image] Worth mentioning: THe vertical banding is not in the art. I suspect it’s down to variations in the paper, thickness of the color layer, changing …

Secondly, I thought of Levenger’s Circa system which I’ve been a fan of for years. What if I can design my own rings?

So came a lot of testing of rings, of card stock, of leather… 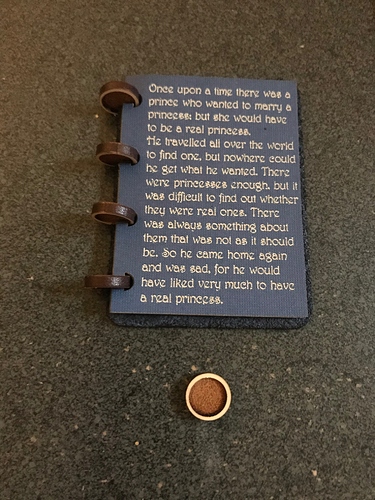 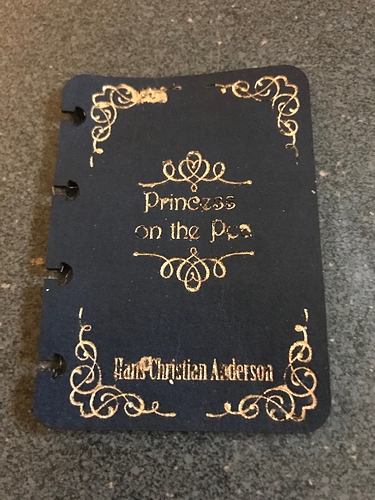 I had the most difficulty with the gold paint on leather. It kept leaking out. I finally used blue scotch painters tape with much better results. I picked the story of The Princess on the Pea, because I love a good fairy tale, and it was short. 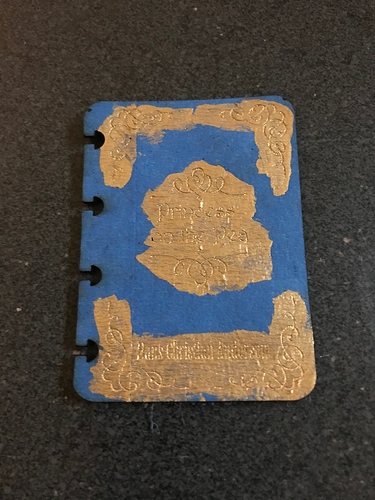 To top it off, I added a wooden cover design to protect the booklet. Through a trade with @ElsieH , she did a mother-of-pearl inlay for me that looks stunning. Thanks, @ElsieH ! 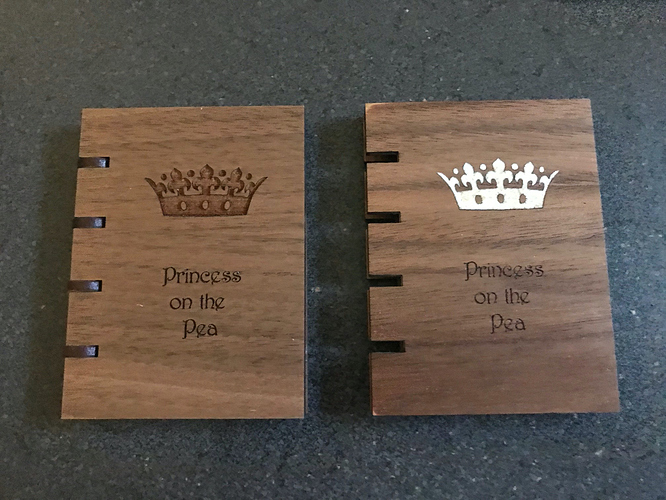 My dream of being able to create a miniature booklet you can read and turn the pages - all made on the Glowforge - has finally been realized! 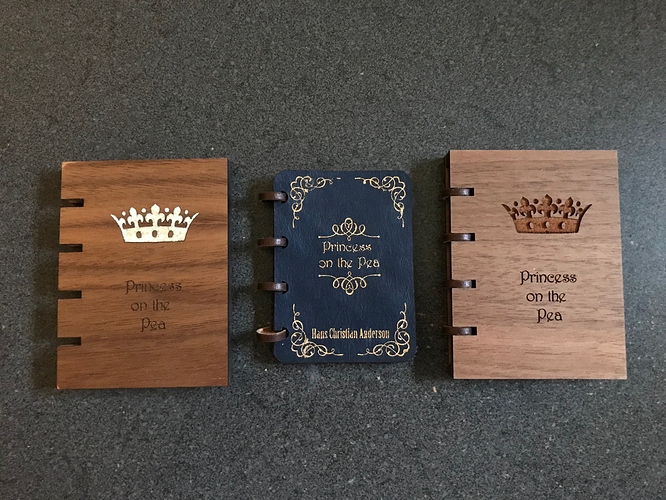 Darn, forgot the quarter pic… the pages are 3" high.

Love it! Anything else you come up with that you want me to inlay for you, let me know, that was so much fun!

Ohhhh, thanks! Our trade was a lot of fun!

So came a lot of testing of rings, of card stock, of leather…

I have been playing with the thought as a box hinge, but that is still in progress.

I love it! Very cute!

How wonderful! It’s hard to say what i love most about this…

All of this is just way too cool. Fantastic job.

Your little projects are some of the things I thought I might be doing with the laser also.

Maybe one of these days I’ll get there. I’ll enjoy your creations until then.

Thanks! Well, you still have a day job that interferes… and that you also enjoy!

Nice work there Lady! The detail in that reading room miniature is amazing. The oriental rugs, the brass drawer pulls, the chair nail work…

Thanks, @PrintToLaser! That was another fun project, but pre Glowforge…

I think I recall you had posted it a while ago, it’s just as awesome as the first time I saw it. I think I see more detail everywhere I look!

Thanks, @Xabbess! I just love finding ways to use my Glowforge.

These are so fun! Who doesn’t love a good book! Love your library. I could just sit in the chair and read all day.

Oh, very cool and cute! My favorite is the blue one. I’ve tried to do gold on leather and it is not easy.

That is amazing work, and also today I learned that your title is more accurate to the original.

Thanks, @ptodd, it is my favorite of all the room boxes I’ve made too.