Rita’s email came on Tuesday. I had to re-read it a few times before it actually sunk in that it wasn’t a joke, and that I really was being offered this wonderful opportunity. As so many others have said, my response was an incoherent:

(or something to that effect)

My Squeeforge was scheduled to arrive on Friday, which gave me a couple of days to quickly get my office and my act together … or so I thought. Instead it arrived on Thursday (perhaps because I’m fairly close to the Mothership?) and I was not prepared. This was doubly frustrating because the biggest box looked as though it had been manhandled a bit by Fed Ex, and I was eager to unbox and make sure that everything was okay.

We originally planned to re-arrange our office on Thursday night, so that there’d be a space ready and waiting when it arrived. Putting the office back together took longer than expected, so we didn’t actually unbox it until last night. I was delighted to find that even though the shippers were a bit rough with the box, the contents were extremely well packed and completely unharmed. The manual is well written with clear instructions, so set up was fairly simple. Unfortunately our plan for the window vent needed a tiny bit of tweaking, so I had to wait until today to be able to start 'er up.

The manual offers suggestions for your first few prints, which provides a nice starting point to get a feel for the machine. I ran my first print (the founder ruler) quickly and easily. The second suggested project was the plaque below. This walk through gives a nice overview of the trace feature, design placement and resizing. My version features a Poe quote in honor of today’s date:

“I have great faith in fools - my friends will call it self confidence”. 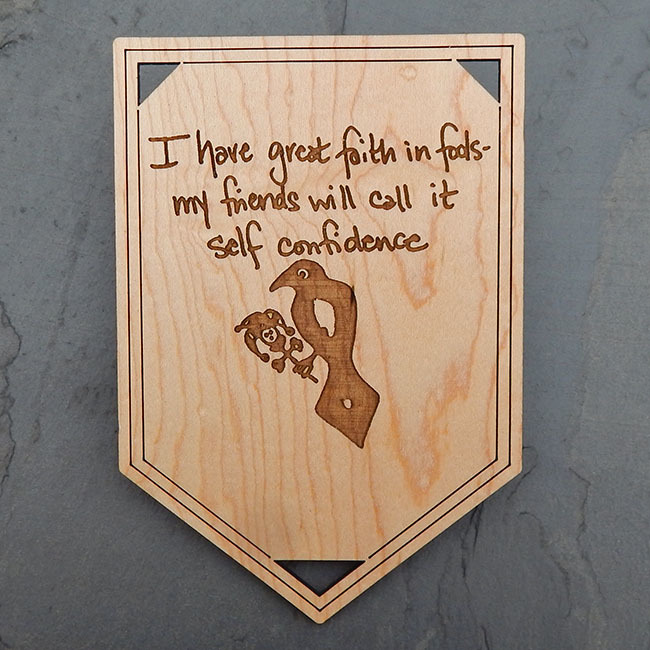 Per the instructions, I used a sharpie which felt a bit bulky to me … so my raven/marotte doodle came out pretty derpy, and the lettering on “fools” is spaced too closely and looks like “fods” (obviously, both of those issues are user errors). I’m not quite sure why there are holidays in the raven’s wing and tail - those bits are solid in the original doodle; my guess is that I just used a little less pressure with the sharpie in those areas, and the camera is sensitive enough to pick up on those subtle differences in shading? In any case, it was a nice little test drive of the trace feature, which is something I hope to use often.

This post is getting long, and my husband is forcing me to go eat dinner now (I suspect it’s a good thing that I have someone to remind me to eat – I’m pretty freaking excited!!). So I’ll spare you the rest of my goofy experiments and observations for the time being

. As others have said, I’ve been having some major “I’m not worthy” moments around this. The other pre-releasers are sharing work that is both awe inspiring and humbling. My own offerings may be more of the “what not to do” variety, but I’ll do my best to share them so that others can learn along with me, and maybe bypass a few mistakes.

My heartfelt thanks to @dan, @Rita & @staff for this opportunity, and for the work that you put in to building these machines for us!! I can already tell that this is an amazing tool, and I’m so excited to learn how to use it. I know that it’s going to be a game changer for me, and for so many other creatives!

Each of these get me gitty like when I got my email. So good to see these continue to roll out. I seriously can’t imagine what this place will look like when production models start rolling out. I can’t keep up now.

Yaaaaay! Can’t wait to see what you draw…love the little raven and fool!

You are a great choice with your skill set and creativity. And you have been super on the forum! I’m so glad you got one.

Oh, I’m SO glad you got a pre-release! I was hoping you would get something before your drop-dead date and I presume that is off the table now. Doing the happy dance!

Congrats!!
Too much loss of drool this weekend!

Fantastic! Congrats and looking forward what you gonna make

Congrats and looking forward what you gonna make

No pressure with everyone looking over your shoulder eh?

Oh man, me too! I really did not expect this at all, and I was racking my brain trying to figure out an option that would enable me to hang in. None of my other choices were convenient or appealing, and it was really stressing me out. It would have gutted me to bail out this far in!

So at the risk of gushing, I am incredibly grateful.

Congratulations! Can’t imagine how good that email felt, excitement and relief! Happy for you.

Sweeeeet. Really looking forward to what you have in store.

I’m not quite sure why there are holidays in the raven’s wing and tail - those bits are solid in the original doodle; my guess is that I just used a little less pressure with the sharpie in those areas, and the camera is sensitive enough to pick up on those subtle differences in shading?

They look like reflections to me. Perhaps the ink was still wet enough to reflect too much light back up at the camera?

Congratulations, I’m glad you received one.

That’s fantastic, @Drea! Please do let the support team know about the raven wing/tail - anything that doesn’t work like you expect.

Happy to see artists getting GF to play with. Congratulations

Holiday - an unintentional gap left on a plated, coated, or painted surface

I don’t think I had heard that usage before, thanks!

Also, congratulations on the Glowforge!